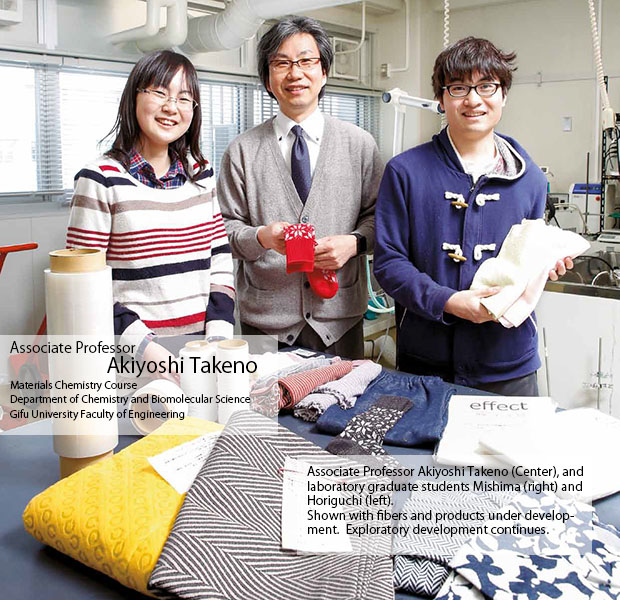 The "nano porous fibers" we have developed are a synthetic fiber riddled with microscopic voids (holes) less than 100 nanometers in size. These fibers are a revolutionary product capable of offering cosmetic, antibacterial, odor-controlling, and various other functions through components such as vitamin C, tannins, or enzymes packed into voids of a fully adjustable size. Development of the fibers is the product of years of joint work with fiber makers both inside and outside of Gifu Prefecture.

The new fibers were produced by creating fine cracks known as "craze" in a specialty film with an innovative molecular formulation and processing this crazed film into finely split filaments (slityarn). The interior of these crazes consists of interwoven fibrils with voids on a nanoscale. When these voids are heated to approximately 60°C, they contract, and if the fibers are infused with a component which is then heat-treated, this property seals the component into the fibers in its original form. And because the shrinkage prevents passage of water, a component effect can be maintained for a long duration, even with washing. Until now, the main technique for imparting a certain function to a fiber has been to formulate a resin with a functional component and melt the materials at high temperature to form a fiber, but the high temperature of 200°C requires no effects virtually all of an enzyme or fragrance component . In other techniques, fibers are coated, but in this case, washing or other actions also strip off the functional component easily. The newly developed fibers, however, can be processed at comparatively low temperatures below 100°C and make it possible to encapsulate enzymes and other functional components in living form.

Thus far, the "Gifu University Research Group for the Practical Use of Nano Porous Fiber Craze Processing" has commercialized the fibers in such forms as body wraps and socks. In addition to the Industrial Technology Center of the Gifu Prefectural Government, the Group includes Kamiya Material Gifu Co., Ltd; Miwamasaknit Co., Ltd; Asahi Orimono Co., Ltd; and Toyoseni Co., Ltd., all from Gifu Prefecture, and the Yagikuma Co., Ltd., from the city of Fukui. New items that the Group produced last year also include mats infused with different seasonal fragrances such as menthol and ginger. 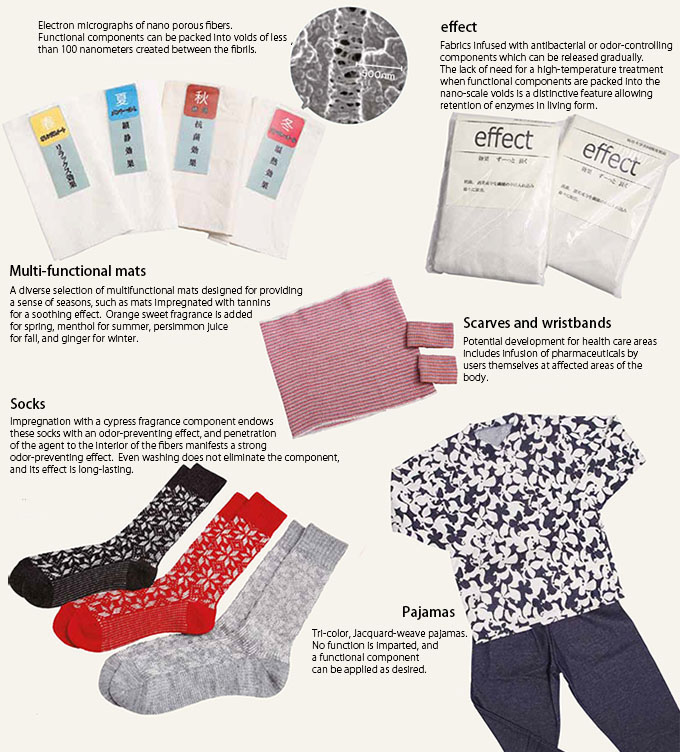 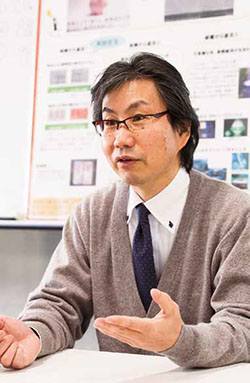 What led to the birth of nano porous fibers was an initial "chance discovery" at Gifu University more than 20 years ago, when I started working for the university. At the time, polymer films under use in a separate research process had been damaged, and questions about why the damaged areas glittered and sparkled led to microscopic investigation. In the process, we found that the anisotropic scattering of the incident light had an orientation, and that the light shined only in specific cases. We also found that this phenomenon was caused by "crazing", a destructive phenomenon among polymer materials, and that the interior of affected materials had a spongy nanostructure made up of fibrils and voids.

In roughly one year of application after discovery of the crazing mechanism, we developed a field-of-view controlling film which had different transparency when viewed from different lines of sight. This film was commercialized as a mobile phone covering to prevent peeking. What developed next was a new conception: "What can't we do with fibers?"

Actually, this request from local fiber companies and others was a real headache for us as researchers, since molecular arrangemet issues made crazing technology difficult to apply to polymers oriented polymer chains in a particular direction. And in the laboratory, fiber production of one centimeter per minute was acceptable, but in the private sector, the technology would not be profitable without production capability on the order of several meters per minute. But after repeated, persistent trial and error, we found that the process could be quite substantially shortened if a resin were extracted under particular conditions. We set a goal of production at a cost approximately one-tenth that at the outset and made great progress toward commercialization.

"Nano porous films", materials for new fibers, have great potential for application in various fields. For example, research has been done on application in "battery separator" films used to separate the electrodes in devices such as electric cars. "Microbubbles" formed by using such crazed films in nozzle jets are also highly efficient at delivering gases into water, suggesting future use in fish transport or fish farming, where oxygen is needed, and in hydroponic vegetable farming.

Materials like these films with large numbers of holes are called "porous materials." Materials such as styrene foams and acoustic insulation are also porous materials, but nano porous films also have potential as substitutes for these materials. What interested me in the area of materials in the first place was the fact that materials are the greatest factor influencing product performance. Materials have just that great an influence. I think that in the future, these films will find application in various fields and be used as materials that create revolutionary products. 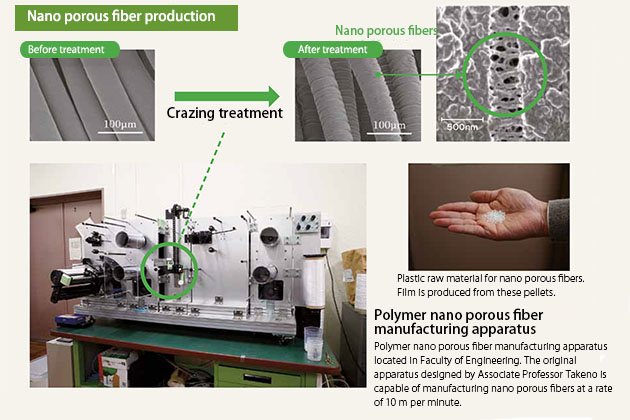 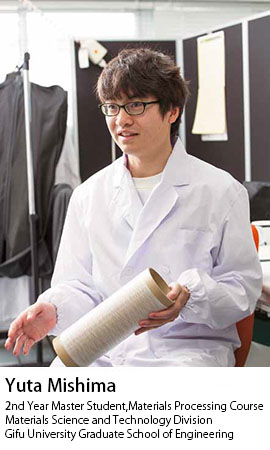 I chose to work in Associate Professor Takeno's laboratory because functional polymer materials have a completely different structure from materials such as ceramics and metals that I had studied before, and I was also interested in working with the new technology called "crazing."

Currently, I'm researching "ozone microbubbles", which are a combination of ozone and microscopic bubbles generated through nano porous films. The use of ozone microbubbles could allow surface modification of carbon fibers by the oxidative strength of ozone, and by the impact force when ultra-microscopic bubbles break down in water. If carbon fibers with higher adhesion produced by these modifications were used in "CFRP" (carbon fiber-reinforced plastics), then further increases could be achieved in the strength of CFRP offering both light weight and high strength. But since the actual changes take place on a micro- level, they cannot be seen with the unaided eye, so experiments are for the most part a steady job of checking numbers in the data. Even so, after a surface treatment is completed, a special coating will turn the entire surface pink if the modification has worked well, and seeing this with your own eyes gives you a sense of achievement. In the future, I think I'd like to take advantage of the knowledge I've gained in interface-related research to work as a materials engineer. 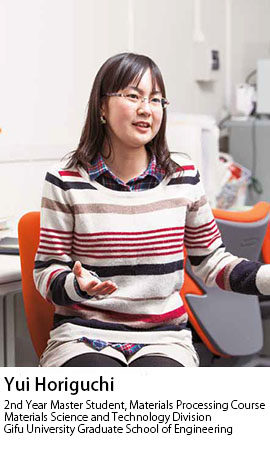 When I first started at Gifu University, I was interested in solar panels, but when I took a class with Associate Professor Takeno in the Faculty of Engineering, I got interested in the world of polymers, which are completely different from metals and ceramics. I was sure if I deeply mastered this field, I would be able to see new things come into being, so I joined Associate Professor Takeno's laboratory. Now, I am researching ways to produce nano porous fibers efficiently while splitting up nano porous films into slityarns . As joint research with private sector entities moves forward, they want "tie-ups with students available for extended research until graduate school", which turned out to be me. At first, the manufacturing process for nano porous fibers was completely labor-intensive, and a very challenging situation for mass-production aimed at commercialization, but after changing the film extraction process and the orientation of molecular arrangement, we were able to complete rapid crazing treatments on films in a long state, not cut into short sections as required before. This reduced the cost substantially and brought the promise of private sector commercialization into view. But manufacturing of the fibers remains uncertain. My work now is to collect and analyze more data and investigate more precise manufacturing methods.