Basic Agreement on the Establishment of the Tokai National University System

The two universities are located in the Tokai region, a world-leading economic area with a high number of manufacturers. Amid this time of the so-called digital revolution or fourth industrialized revolution, industrial structures and society are expected to experience drastic and rapid changes. Looking at examples in other countries, we have found that the presence of leading universities or university groups in local regions is one of the keys for success in regional development. In such regions, a virtuous circle has formed whereby universities contribute to the regional development and meanwhile utilizing this development for significantly strengthening education, research and other functions at the universities. This has consequently encouraged the two universities to consider the integration of their management systems in order to further strengthen their roles and functions as future-oriented national universities with a view to the entire Tokai region.

For this reason, Gifu University, whose mission is regional contribution, and Nagoya University, whose mission is to become a world-leading research university, hope to establish the Tokai National University System that will operate the two universities in an integrated manner on the premise of their different missions. Under a single corporation, the two universities will utilize each other's abilities, proceed to integrate their office work systems and enhance their management capabilities, all with the aim of contributing more to regional development and strengthening their functions to develop into world-leading research universities.

After the establishment of the Tokai National University System, the two universities will continue to exist in their current forms. Meanwhile, the integration of their corporations will help contribute to the sending of promising graduates into society by means of initiatives that could not be accomplished by conventional inter-university cooperation, such as: educational collaboration by taking advantage of each other's merits; the formation of an advanced research hub utilizing their respective strengths in overlapping fields; the generation of intellectual outcomes through world-class research activities; and the development of internationally-compatible, high-quality education. 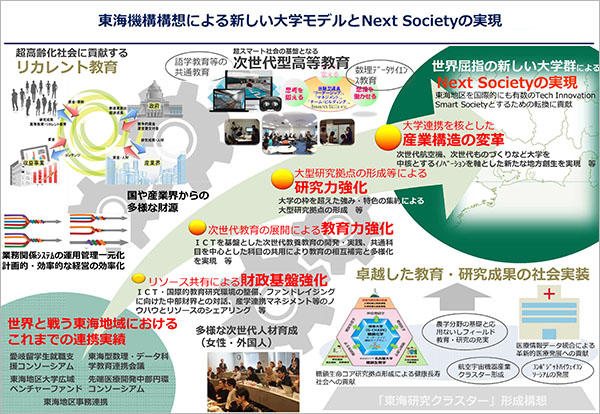