Fostering entrepreneurship and a start-up club

Toward an environment that promotes the growth of entrepreneurial students; efforts to match provision with external demand 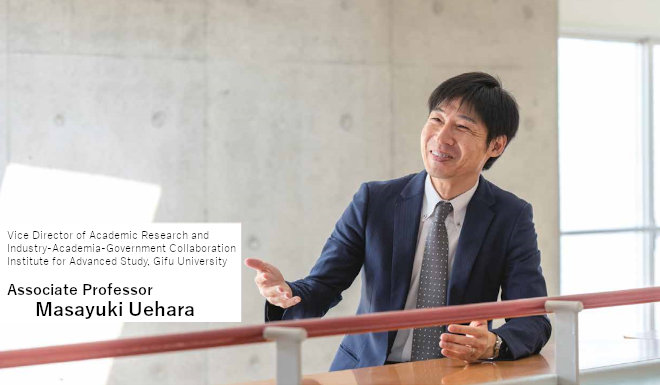 In accordance with the University's decision to create more new businesses, the establishment of the Tokai Start-up Ecosystem -- Gifu University's regional regeneration project that is part of the regional development vision for 2030 -- is fostering future entrepreneurs.

The original motivation behind this fostering of entrepreneurs was the fact that students were increasingly setting up business ventures. Entrepreneurial students had always existed, and members of the faculty had contact with them on an individual basis. However, there are now initiatives to create a community of like-minded people. That said, the number students interested in starting a business is still very low in absolute terms. Thus, the University is aiming to raise the overall level of awareness and widen the potential pool of entrepreneurs, thereby hoping to increase the likelihood of students creating business ventures that have social impact.

The Introduction to Entrepreneurship lecture series offered for the fostering of entrepreneurs since the last academic year is an important element in the GU's program. During these sessions, students hear about the experiences of active entrepreneurs and businesspeople, examine previous cases, and receive basic information regarding the setting-up of a new business. Thus, the students themselves investigate and identify the issues being faced by the local community, and come up with ideas for businesses that may resolve these issues.

According to a survey of 20 students who took the course in the first semester of this academic year, almost everyone said that they were considering the establishment of some kind of business. Although it seems likely that the students who opted for this course had a certain degree of entrepreneurial spirit from the outset, this result is still staggering. As of the end of the first-semester lectures, five of the attending students have already joined the "start-up club" (see inset on page 10) and two are considering joining. Two other students have already begun preparations to actually start a business.

In multiple cases, the business ideas honed by the students during the course have arisen as a result of their own experiences, or those of a close family member or friend. The students have researched the issue in question and begun to find a solution. Because the business ideas are based on issues that are close to the students, the proper consideration of profitability is sometimes lacking. However, in every case, the proposal is unique because it results from the viewpoint of the respective student. For example, among the students' proposals were: the development of a nationwide platform for campus student radio stations, the opening of a café for the elderly that is staffed by nursing and nursing care students, and the establishment of a dedicated social media website for GU students. The idea of the social media site arose as a result of the pandemic weakening connections between students. An online meeting place facilitates interaction between arts students and science students, and makes the site extremely valuable for the potential it offers in the generation of innovative ideas. Thus, alongside the student who designed the site, the University is expediting preparations to open the site as an online message board dedicated to GU students.

The Introduction to Entrepreneurship course will run again with different students in the second semester. From next academic year, we intend to offer a more practical, in-depth start-up program to a smaller number of students.

This course covers the basics of entrepreneurship. Students who take the course research and identify issues faced by the contemporary business world and the local community, and acquire the basic knowledge and skills required to propose ideas that resolve those issues. Additionally, the process of creating a business plan that meets the needs of the community raises students' awareness of their future careers and the world of business, and fosters their entrepreneurial skills. 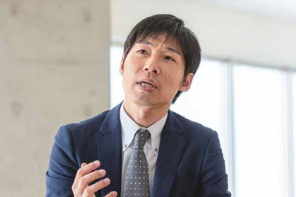 Students striving to start a business set up a "Kigyoubu" (start-up club) in April 2020 to promote growth and encouragement as a result of the members' sharing of their varied experiences and knowledge. This was the first start-up club authorized by a university in central Japan. Entrepreneurship seminars which began in around 2018 triggered the establishment of the club. At first, the seminars attracted few participants, but those who attended included student entrepreneur Shota Asahi, and Shunya Chosokabe, who later led the start-up club. I had heard them say that they would welcome like-minded associates. Those who aim to start a new business end up isolated from those around them because no-one else shares their thoughts. It was due to this that they wanted to create a community. We thought that a place where continuous support could be provided would benefit students who have an appetite for starting new businesses. Thus, acting as an advisor, I helped the students set up the start-up club. Initially, it was a small club with only four members, but 18 months later, the number has grown to 25, and there is every sign that it will continue to grow.

The start-up club sets great store by the "Yes and..." discourse. This refers to the manner of response within a conversation in which Person A does not reject the words of Person B, but instead accepts them and adds their own ideas. This practice ensures that students can act without inhibition. Members are welcome to freely discuss anything that is not against public policy. The club meets every Wednesday and Friday evening, and there is always a lively discussion that takes place. Central to the meetings is the activity report that is written by each member. Recently, we have received increasingly positive messages from well-known business people who have asked to speak at the club. The power of students with an entrepreneurial spirit is palpable.

This academic year has seen the emergence of a number of entrepreneurs from among the members of the start-up club. The first president of the club, Shunya Chosokabe, set up a company in September this year. The current president Tsubasa Hasegawa, and master's student Moeka Sugie are talking about starting business ventures soon. It is interesting to note that students who have made the decision to start their own business are seeking out peers at the start-up club. I believe that this marks the beginning of a new steady stream of value creation that originates in the start-up club. If students in the vanguard can act as role models, other students will surely want to emulate them, and this will facilitate the formation of an exemplary circle of students. 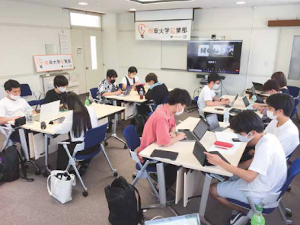 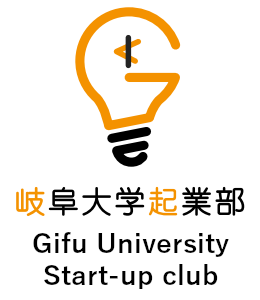 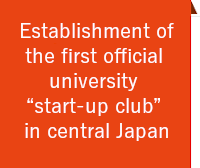 A "Kigyoubu (start-up club)" led by student and faculty volunteers was set up in April 2020. It is an official group within Gifu University, and the first one of its kind in central Japan. The aim of the club is to foster students with entrepreneurial spirit, and enable them to create businesses that can resolve local issues. The club serves as a community that promotes growth as members encourage one another by sharing their experiences and knowledge. Alongside workshops on marketing and how to start a business, interaction with other universities and entrepreneurs broadens the perspectives of club members and raises their awareness of the world of business. Faculty advisors and local business support institutions encourage students' independent actions, with the aim of the creation of new businesses and the revitalization of the local economy.

We intend to further enhance our entrepreneur-related education, which includes the Introduction to Entrepreneurship course, and broaden the activities of the start-up club. Additionally, we are currently focusing on the analysis of research results that have a strong potential for commercialization within the University. If we can skillfully match research results identified at the University with students who intend to set up a business, we can create circumstances that will further encourage the emergence of students' business ventures based on research results.

To promote a sense of entrepreneurship in the community outside the University, we intend to deploy entrepreneurial students from across the institution to deliver entrepreneur-related education in elementary, junior high, and high schools. We believe that rather than starting to learn about entrepreneurship in university, relevant education needs to begin at a younger age. The dissemination of such education has the potential to transform the region.

Besides educating children in entrepreneurship, we also intend to promote the subject in the industrial world. We want to further refine our current entrepreneurship training and include it among subjects to be revisited often during a young person's education. We hope that GU's entrepreneur-related content can be rolled out across the Tokai region and then nationwide in the future, and lead to the invigoration of the Japanese economy.