How much do we need throughout life?
A financial spin on "The Life Planning Game": Inspiring youths to draw up a financial blueprint for their own future 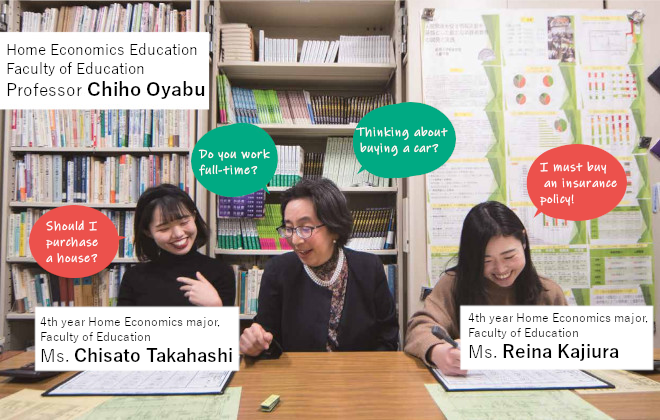 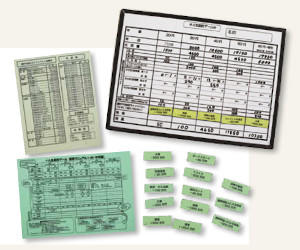 Talking openly about money has traditionally been frowned upon by people in Japan. In fact, we often say, "Don't talk about money in front of others," or "Kids shouldn't be concerned about family finances," etc. However after the infamous financial collapse of Lehman Brothers in September 2008, the importance of consumer education, especially financial literacy spurred by global trends has never been more strongly called for by many people in Japan. At present, education in financial matters are being provided as part of the elementary and junior high school home economics curriculum, and the home economics and civics classes at senior high schools. In fact, for most Japanese students, home economics and life planning classes starting at the senior high school level may be too late. Even these days, elementary school children are being taught skills in drafting a financial blueprint early in life to avert putting kids in jeopardy of struggling with money problems later on in their life. Given the social realities of modern Japanese society such as super aging, declining birthrates and even worse, the rise of single household families, financial literacy education is not only important but also increasingly necessary. Many Japanese children even at this age are inclined to hold such dreams and hopes as "I want to get married someday," or "I want to be such and such when I grow up," etc.

In 2007, together with my seminar (study group) students, we developed an educational game called, "The Life Planning Game" (based on the classic board game) targeting upper-grade elementary school children and above.
The players first select significant "life events" they hope to see happen every ten years from their 20s, which include marriage, childbirth, etc. They then calculate the funds required to take them through the course of those life events. Random stack of cards for "unexpected life events (such as accident, inheritance, etc.)" mirroring the events in life that can come out of nowhere are also drawn by each player. The intent of the game is to instill young people to think seriously about life and finances by taking into account numerous possibilities in life's journey.

What is "The Life Planning Game?"

An educational game to teach financial literacy for kids by simulating the financial situations and challenges that each child will encounter in life, provoking them to consider the question: "Can I stretch my yen to the end of my life?" The game board is divided into ten-year span rectangles (or blocks) starting from the 20s. At the beginning of each ten-year span, each player proceeds on their own by selecting certain pivotal life events such as marriage, work, etc. and expectant financial decisions such as buying a car or house, paying for steep cost of children's education, travelling, etc.) from the list. The player also randomly draws cards representing "unexpected" life events that can hinder personal finances such accident, fire, inheritance, etc. A balance sheet is drawn up for each ten-year span and corrections made if needed. At the end of the game, the player gains an insight into the amount of money left at the end after undergoing their life path. Depending on the amount of money left at the end, their financial success is judged according to five types like "a barely successful life," "a life lived thoughtfully,"etc. As the player moves through the game, he/she is made to realize where potential financial problems or calamities lie ahead.

Raising financial responsibility is one thing, but essentially developing "personal maturity" is the real mission of the game 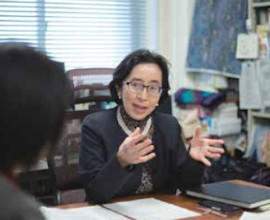 The "Life Planning Game" may appear humdrum as individual players play the game on their own, but when we introduced the game to school children, we saw that many of them couldn't wait to get their hands on the game even before explanations were fully given. We also overheard children talking among themselves during class breaks about what age they got married or if they had bought a house.
The results of questionnaires conducted before and after children's participation in the game revealed that many children could envision their future in more specific and concrete ways. For example, one child who wrote before the game, "I want to live a life free of financial stress/worries," later commented after the game that, "I realized I could save this much money if I weren't so wasteful." Some children were even aroused to express their appreciation for their parents and showed their willingness to help them more now that they realized the importance of hard-earned money.

The major objective of this type of educational resource was to enhance students' awareness about money matters, and we later realized that many children gain the skills for self-improvement and the power to open up possibilities in life.
Child development can be analyzed in the following three stages and their corresponding learning outcomes: 1) ability to grasp reality = learning outcome "the game was fun"; 2) internalization of values = learning outcome "recognition that Mom is trying her best to save money;" and 3) developing a strong sense of creativity = learning outcome "I think I will attempt this."
The questionnaire results showed that many children steadily progressed through these stages through participation in the game. Further analysis also indicated that children who were good at gathering information from multimedia sources (such as TV news, journals or magazines, etc.) were more likely to quickly move up to either 2) and/or 3) above. Based on these findings, we are convinced that the importance of information gathering is universal in any educational activities. 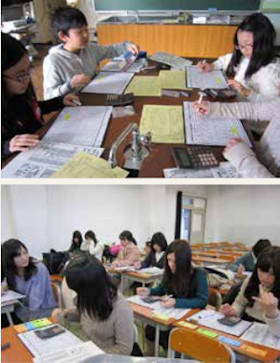 The game was well-received by many schools within Gifu Prefecture. More than 1,000 students ranging from elementary schools to universities in and outside of the prefecture have already taken part in the educational game activity. In Gifu City, all the junior high schools have also tried out the new version of "The Life Planning Game."

Last year, our team also devised a new game called, "Planning for Later Life Game" targeting people planning and managing their later lives. The game is not only used for students in Gifu University, but also used in corporate workshops/seminars for employees in their 40s and 50s mapping out their retirement future. In 2018, our work was honored with the "Financial Knowledge Promotion and Contribution Award" presented by the Financial Services Agency and the Bank of Japan.

The major reason why our educational game attracted wider recognition even beyond Gifu Prefecture lies in the fact that the objectives of the game lived up to school teachers' expectations as they struggle to instruct their students in personal finance education, which is a relatively new field of study in Japan. The whole process of developing "The Life Planning Game" not only gave us enormous pleasure, but ultimately offered a lot of fun and excitement to the group that matters the most - school children.

Educators are always reminded to incorporate the 3Fs (FREEDOM, FRESHNESS and FUN)" in their classroom lessons. Naturally, we have faithfully kept this principle in mind as we continue to make contributions to the development of regional education. 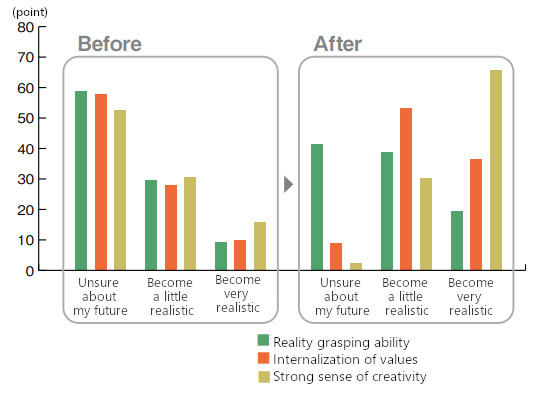 The Effectiveness of "The Life Planning Game"

We conducted a questionnaire to measure "reality grasping ability" before and after the game to analyze the effects of participating in the game. Fewer students responded realistically before the game, but after the game, responses indicated a better understanding of the financial realities of life. This important finding proves that "The Life Planning Game", provides a valuable educational tool for children to develop "reality grasping skill." For students started off with a high "reality grasping ability" even before the game, were able to improve their scores by 57 points in "developing a strong sense of creativity." We conclude that children who can properly grasp reality also develop a strong sense of creativity, and by extension, achieve personal maturity.