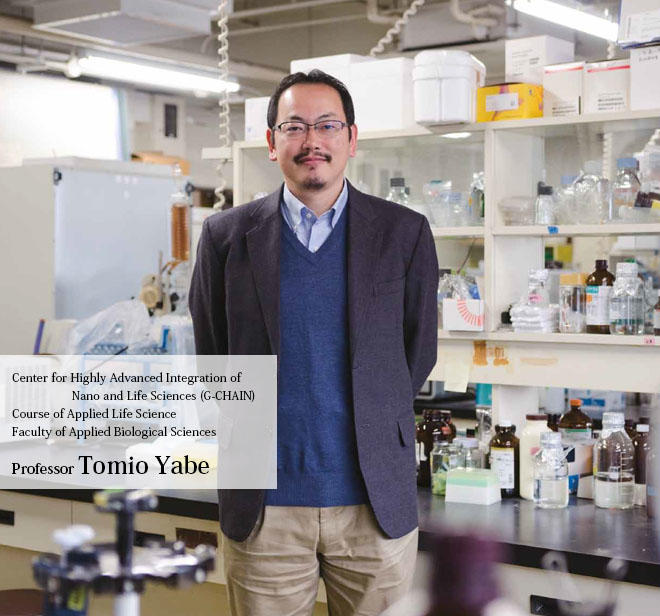 Born to a rice farmer, I studied bakery yeast while at university. Currently I am working on research of saccharides and dietary fibers that constitute carbohydrates. While reducing weight, the saccharides in food is neglected by dieters, but it is a crucial element not only contained in food but also in our body. At present, there are many things that we still do not know why saccharides are important to humans.

In recent years, by gradually revealing the mechanism of genes, research on proteins encoded by genes has been progressed. On the other hand, saccharides are not directly biosynthesized from genes but are done from enzymes encoded by genes, so they are substances that are not suitable for anyone to pick up as his/her research subject. Naturally, little advancement has been made in the research of saccharides both at home and abroad. Moreover, saccharides have been regarded as not playing an important role. However, with no major breakthroughs to effective cancer treatments in genetic engineering, people start to pay more attention to the saccharides for possible cancer-fighting effect as it is considered to play an important role in maintaining our health.

Since I started to work for Gifu University, I have been conducting a number of research projects to measure the potential impacts of saccharides and dietary fibers on humans. Among others, a dietary fiber called pectin has become one of my main research focuses. I stayed in the United States to study heparan sulfate, a unique acidic sugar with sulfate groups that is found in animals. Some findings show that if heparan sulfate is not biosynthesized in the body, the position of the heart may shift more to the center, or lung respiration cannot function, then the animal dies. A deficiency of heparan sulfate is believed to induce a wide range of birth defects and illnesses in living creatures. Eventually, I focused on my study on dietary fiber pectin (an acidic polysaccharide similar to heparan sulfate) contained in food.

Pectin is rich in vegetables and fruits, and it is often used to make jams. Discovered around 200 years ago, pectin is used for almost all processed food today, however, little research has been conducted to determine how pectin works in the human bodies, and little is known yet about this substance except for its thickening properties. From my studies on heparan sulfate, I believe that pectin has many more special unknown effects.

It has been reported that pectin extends the villi in small intestine. The villi are projections found in the walls of intestine that absorb nutrients. In the past, the villi of Asian people were longer than those of Europeans, but around 30 years ago, some research results reported that the length of the villi was completely reversed between Asians and Europeans. It was found that the intake of dietary fiber changes the state of villi in an acquired manner.

Our team began to study the mechanism of villus extension, and found that epithelial cells (whose major role is to control nutrient absorption) in the small intestine can identify pectin, and activate heparan sulfate on the cell surface, and then accelerate cellular proliferation and extension of the villi. In animal studies of mice, we noticed that the state of the villi significantly changed in just 10 weeks by feeding them pectin. Through a series of experiments, we concluded that dietary fiber intake can trigger major changes in the small intestine in a short period of time.

However, it is still unknown how this villus extension may contribute to our health. To elucidate the questions, we have been conducting experiments since last year to compare mice with or without pectin. We are examining what kind of effect that extending the villi has on health. In the experiments, we used mice whose life expectancy was artificially shortened to one-third of that of ordinary mice. If the healthy lifespan of mice fed with pectin is extended, longer villi can improve nutrient absorption and promote health. 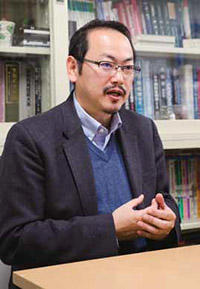 Dietary fiber is thought to prevent bowel cancers, but too much intake could cause diarrhea in some people. The Ministry of Health, Labor, and Welfare of Japan sets the maximum limit on daily dietary fiber intake at 20 g, but there are people who do not have diarrhea even when they consume 40 g per day. It has been long considered that anyone who underwent bowel surgery should not eat dietary fibers to prevent diarrhea, but other survey results showed that a small amount of dietary fiber may help patients recover from intestinal diseases sooner than expected. Once our research has led to the elucidation of the function of pectin and its possible impact on humans, we can choose food without much concern about its negative aspects.

What are the roles of food vis-à-vis our body functions? If we close in on the truths of food, we can propose a more balanced diet to people. Our ultimate goal is to create a new platform to help people enjoy eating without giving too much thought to the adverse effects of food ingredients. Our team stays committed to continuing with our research to enhance and maintain people's health through day-to-day dietary improvements.