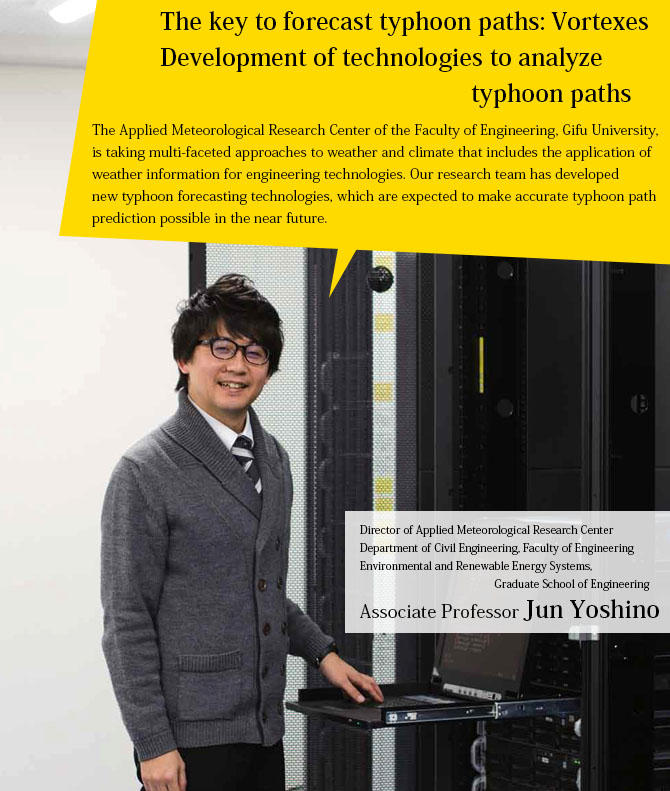 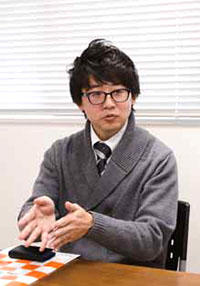 When I was a child, I became excited whenever I heard typhoons were approaching. The state exam of certificated weather forecaster began when I was at a senior high school and this state exam propelled me to study meteorology at a university. I passed the exam when I was in my junior year. Since 2004, I have worked for Gifu University, and was appointed as director of the Applied Meteorological Research Center in 2017.

Currently, our team has been working to develop an analysis technique for typhoon path formation to find out why some typhoons take peculiar courses.

When we see a weather chart including a typhoon, it seems to whirl around its center, but in reality, multiple vortexes are spinning like tops, thrusting a typhoon forward. We paid attention to a physical quantity called the potential vorticity (PV). The PV of a typhoon can be expressed numerically by wind speeds, temperatures, and pressures in the atmosphere. Through the numerical calclations of potential vorticity, we can also re-calculate wind speeds, temperatures, and pressures inversely. By using this theory, we are now able to calculate total PVs found in the typhoon environment and to divide various types of PVs. We later classified them into six different PV categories. By inversely estimating each of wind speeds from the five PV categories excluding that of a typhoon itself, we are studying how peripheral vortexes will influence a typhoon and its future course.

Our team studied Typhoon Lionrock (Typhoon No. 10 in 2016) that hit the northern part of the Tohoku Pacific region in 2016. It was the first typhoon that made a landfall in the region since the typhoon observation was started in Japan. Generally speaking, a typhoon is pushed from west to east by westerlies, but Typhoon Lionrock first moved from east to west, then went south, and finally moved from southeast to northwest. It was indeed a "freak typhoon." Figure 1 shows the observed velocity vectors of Typhoon Lionrock, and Figure 2 shows the wind velocity vectors at the center inversely estimated through application of our theory. When compared between the two, we were able to make a significantly precise typhoon path estimation that explains why Typhoon Lionrock took such an unusual path. We will keep on enhancing our estimation levels by further developing our theories and technologies. 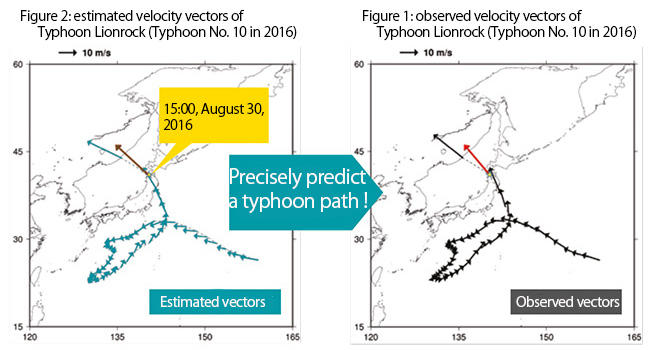 How can we give back our expertise to the community?
How to use weather information 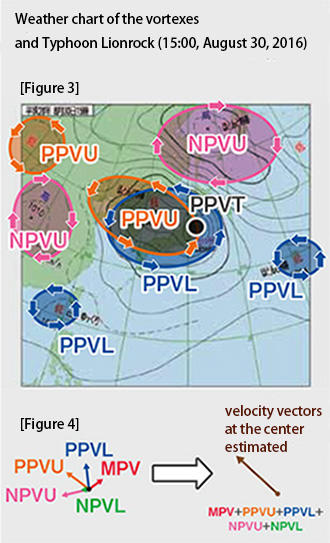 Figure 3 shows the weather chart of Typhoon Lionrock
(Typhoon No. 10 in 2016) (provided by the Japan Meteorology Agency).
Figure 4 shows that the velocity vectors calculated from the five
different peripheral PVs at 15:00, August 30, 2016. The directions
of the estimated wind vectors coincides with the observed typhoon
moving velocity vectors, their lengths indicate wind velocities.
Estimated moving vectors predicted from the five different PVs can
determine the future typhoon paths. In this case, PPVU, PPVL and
NPVU with strong winds are thought to influence typhoon paths.

Meteorology originally comes from geography because the two subjects share the same goal: solve the mysteries of nature. Students usually study meteorology at the faculty of science, but students in Gifu University study it at the Faculty of Engineering. This is based on the concept that studies of meteorology facilitate the practical use of weather information for society if they are combined with engineering. The Applied Meteorological Research Center obtained the permission of the Operational Weather Forecasting (Registration No. 87) from the Japan Meteorological Agency and publishes our original weather forecast in and around Gifu Prefecture in real time (the center is the first and sole organization that has obtained such permission in the Japanese universities). Part of the center's services includes providing local residents with real time weather information every day. Nine researchers specializing in applied meteorology work for the center, and they are engaged in research ranging from lightning and global warming to renewal energies (solar, wind power, etc.). Our team is aiming to promote educational and research programs toward the practical use of weather information being combined with engineering expertise to contribute to the growth of local industries and the community.

The center is also focusing on applying the new technologies to weather-related businesses in the future. One such application is an integration between point of sale (POS) data and weather information. For example, when POS data on soft drinks and weather information were combined, we were able to understand that high temperatures induced brisk drink sales. Such data integration can help employees properly monitor shipments, inventory adjustment, and eventually push productivity. Weather information can generate significant results if artificial intelligence (AI), the internet of things (IoT), and big data are applied. It can also provide value-added services if connected to information and communication technology (ICT). My prime responsibility is to create dynamic and sustainable weather information businesses so that many young talents can build their career paths in the weather businesses in the future. 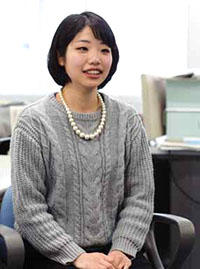 I love meteorology. I become very excited when the desired results are achieved through experiments!

Since I first attended a meteorology class, I was enthralled with its charms, and I decided to join Professor Yoshino's seminar. My current research theme is how to forecast typhoon paths through "piecewise potential vorticity inversion." By this analysis, we can predict the typhoon moving speeds. Our team's mission is to find some causes for why large gaps of typhoon paths between observations and predictions come to emerge. I feel most excited when our calculations lead to the right predictions of typhoon paths. I hope I can utilize my research results for disaster mitigation and prevention in the future.