Penetrating the cell and stopping proliferation and metastasis. We have successfully developed innovative therapeutic drug candidates! 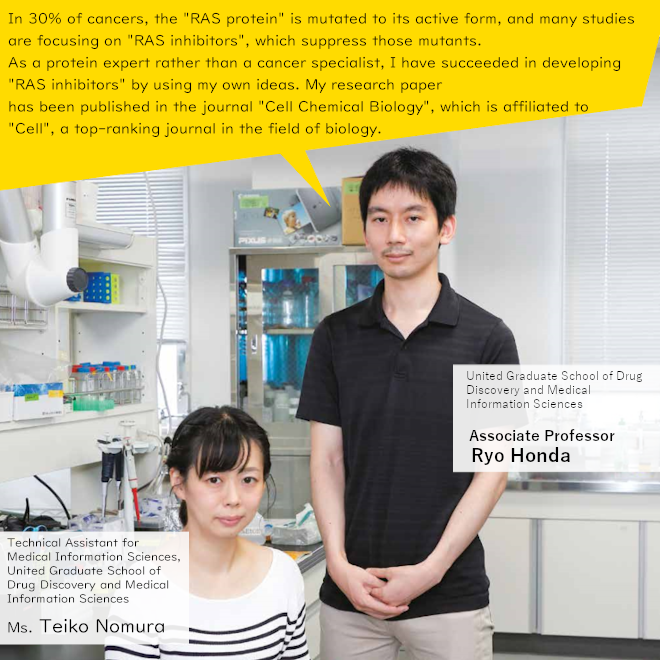 Outcomes arising from a unique approach as a protein expert. 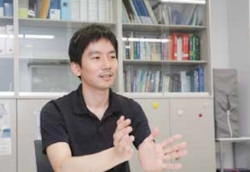 Aspiring to be a researcher, I enrolled at Gifu University School of Medicine, and later in graduate school I studied the mechanism of prion disease development, a category of disease that causes abnormalities in the three-dimensional conformation of proteins.

In 2017, when I had my own laboratory under the Tenure Track System ※1, I considered taking up a research theme centered on proteins. After discussions with Professor Yukihiro Akao, who had been conducting research on anticancer drugs and cancer prevention in a laboratory next to ours, I became interested in basic research on anticancer drugs targeting oncogenic RAS proteins. RAS proteins are the focus of many studies all over the world, but I thought I could make a difference by utilizing my unique perspectives as a protein expert.

RAS proteins act as switches that turn cell growth on and off. They are also present in normal cells, but in approximately 30% of cancers, they remain switched on due to mutations in the RAS protein, causing cancer cells to proliferate and metastasize. This can be stopped by "RAS inhibitors", which bind to RAS proteins that remain switched on.

Molecularly-targeted drugs that target a particular molecule are commonly low-molecular-weight compounds that inactivate the target protein by fitting perfectly into the small concavities on the protein's surface. However, RAS proteins have no concavities on their surface. Therefore, I considered developing a method aimed at creating a high molecular weight protein with an RAS-binding domain (RBD) that is larger than the RAS protein, which would allow for capturing the RAS protein in its concavity. To achieve this, the RBD needs to get inside the cell.

As I proceeded with my research, I came up with the idea of synthesizing a number of "cell-penetrating proteins". A previous study reported that when peptides※2 capable of penetrating the cell membrane were bound to a protein known as ubiquitin, each of the proteins penetrated the cell membrane. I thought that since RBD has a structure similar to that of ubiquitin, it could be inserted into cells by using peptides in this same way.

To achieve this, one needs to carry out difficult experiments consisting of synthesizing and purifying proteins before administering them to cells. That was a process in which I could exercise my expertise. Eleven types of RBD and 12 types of cell-penetrating peptides were selected based on a review of papers from previous studies. Proteins combining the above were synthesized and applied to cancer cells and evaluations were attempted 51 times; after 6 months of try and error, we have developed three RAS inhibitors that suppress RAS proteins. 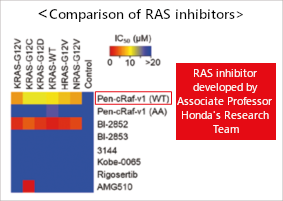 Comparison of the RAS-inhibitor Pen-cRaf-v1 developed
by our team and those reported in previous studies.
Pen-cRaf-v1 exerted inhibitory effects on multiple mutant
RAS proteins, demonstrating its superiority.
Glossary

Shaking up an area of intense competition and aiming to achieve world-changing research findings.

Previously discovered inhibitors of low-molecular-weight compounds were only capable of binding weakly to RAS proteins with no surface concavities, and since they also bound with other proteins, they exerted additional effects other than the intended action. One of the superior properties of the RAS inhibitors I developed is the highly "inhibitory effect" they exert by holding and strongly binding to the RAS protein and turning off the cell growth switch. The other property is their "specificity" in selecting and binding only to RAS proteins. Those two properties were achieved because the RAS inhibitors are proteins, namely polymers.

The research is focused on one of the three types of RAS inhibitor that I developed, specifically the one that can penetrate the cell membrane without damaging it. We are currently proceeding to evaluation in mice. In experiments conducted on cancer cells, the RAS inhibitor that I developed inhibited the RAS protein, but its effect in mice has not yet been confirmed. More remains to be done to find out whether the RAS inhibitor is degraded in the body or excreted with urine; the underlying mechanism needs to be determined, and improvements are needed for it to inhibit RAS in vivo. If the switch is on and signals for cell growth are generated, this means that the RAS inhibitor also binds to RAS proteins in normal healthy cells, leading to side effects. RAS inhibitors must bind only to mutated RAS proteins. Data regarding existing molecular-targeted drugs suggest that some level of effect on normal cells might be acceptable, depending on the doses administered, but improvements are needed to further reduce such effects.

Generally, molecular-targeted drugs made of low-molecular-weight compounds inactivate their target protein by fitting perfectly into pocket-shaped concavities on the protein surface, but the surface of RAS proteins is smooth. Conversely, Associate Professor Honda's research idea is to capture the RAS protein in a large protein pocket.

RAS inhibitors are considered difficult to develop, and we plan to evaluate them as therapeutic agents so that they can be used not only in cells but also in organisms, such as mice, and eventually in clinical settings. Further challenges lie ahead but I am determined to overcome them. I would truly be happy if I could confirm the beneficial effects of the pharmaceuticals launched from my basic research studies.

I tell myself, "Because I have jumped into a highly competitive field, I will conduct my research thoroughly, making full use of originality". Thanks to our pioneering efforts, we have also received new support and the research environment has been enhanced for newcomers from other fields of specialty. I want to carry out world-changing work that only we can do.