Stress often causes diarrhea in men and constipation in women. Neurotransmitters in the spinal cord would be responsible for gender differences in defecation disorders.

The key to this issue is the sex differences in neurotransmitters, which are the focus of research conducted only in our laboratory.

With the aim of becoming a veterinarian, I enrolled into the Department of Veterinary Medicine at Gifu University, and after graduation, I entered into and completed a doctoral program at Hokkaido University, where I chose to make a career in research. Since then, I have been conducting research on brown adipose tissue involved in "slimness despite gluttony" (or "slim big eaters"), as well as research on artificial hibernation.Although my research themes are diverse, they are all encompassed within the field of "physiology", which is common to humans and animals. When it comes to the functions of organs and tissues, there is no big difference between humans and animals, and physiological research using experimental animals can help to elucidate mechanisms working in the human body.

This study began at a time when a female student with irritable bowel syndrome (IBS※1) who was enrolled in my laboratory consulted me regarding her desire to conduct a dissertation based on her own experiences, on the topic of "sex differences that make women more likely to be constipated than to develop diarrhea". Based on my own experiences, I believed that there were no sex differences in the mechanisms that regulate defecation. However, when I conducted experiments using rats, the results were unexpected. Our findings show that "stress makes females more likely to be constipated and males more likely to develop diarrhea".

The intestines have a well-developed nervous system, which is also known as the "second brain", which thinks, regulates bowel movements, and alters enzyme secretion according to the amount and nutritional composition of food ingested. There is no sex difference in this mechanism itself. I have previously confirmed that administration of dopamine or serotonin to the spinal cord stimulates the spinal defecation center and enhances motility of the large intestine. Since these substances are secreted in response to pain, I conducted experiments in which capsaicin, a pungent ingredient found in peppers, was used to administer painful stimuli in the large intestine of rats. The findings confirmed that colorectal motility was enhanced in males but not in females.

Since IBS is closely linked with stress and stress affects brain function, we considered that the brain may be involved in the gender differences in symptoms of IBS patients. We conducted experiments focused on the fact that when pain occurs in the body, pain signals are sent from the spinal cord to the brain, and neurotransmitters are supplied from the brain to the spinal cord via the descending pain inhibitory pathway in order to relieve pain. As a result, we discovered that the components of the neurotransmitters differed between males and females, and that this may have caused sex differences in their effects on defecation control. We have confirmed that in male rats, colorectal motility was enhanced by the effects of dopamine and serotonin, which are neurotransmitters of the descending pain inhibitory pathway. However, in female rats, dopamine did not operate in response to painful stimuli. Instead, serotonin and GABA were released, resulting in an absence of enhancement of colorectal motility. GABA suppresses neural activity, therefore, in IBS, the effects of GABA induces constipation by counteracting the effects of serotonin. These findings helped us partly elucidate the sex difference in defecation abnormalities that makes men more likely to develop diarrhea and women more likely to be constipated, and this brought us closer to the elucidation of the pathophysiology of IBS.

So why are the effects of GABA stronger in women? We can presume that since a woman has a uterus in the pelvis where the large intestine is located, the actions of GABA might be enhanced by ovarian hormones to help her tolerate the pain of childbirth. Castrated female rats with no ovaries responded similarly to males. The differences between males and females in terms of their responses are meaningful.

We hope our findings will lead to the elimination of symptoms associated with IBS, such as sleep disorders and depression.

IBS includes diarrhea-type IBS, constipation-type IBS, as well as mixed-type IBS, a condition with repeated episodes of diarrhea and constipation. Findings from the current study have also shown that the effects of GABA were stronger when castrated male rats with no testicles were injected with female hormones. Instead of remaining constant throughout life, the supply of neurotransmitters varies depending on various factors, such as hormones. One of our future challenges is to clarify the underlying mechanism and further elucidate the pathogenesis of IBS.

Most patients with IBS have concomitant symptoms, such as urination abnormalities, sleep disorders, and depression. After we published the findings of this study, I was also informed by psychiatrists that "patients treated with antipsychotics suffer from severe constipation," therefore, I have also developed an interest in the influence of the brain on peripheral organs. Starting with the onset of pain in the large intestine, signals are believed to be transmitted between organs via the brain, and this may affect mental activity. Thus, we are now working to elucidate the mechanism thereof.

A "brain-gut interaction※2" is said to exist, but my laboratory is the only one in the world to approach the gut from the perspective of neurotransmitters supplied through the descending pain modulatory pathway. I am confident that our approach offers a unique advantage. The original purpose of my study was to elucidate the sex differences in the pathology of IBS, but the more I proceeded with my research, the stronger my desire to contribute to the elucidation of the pathogenesis of IBS. By increasing awareness about IBS itself, I hope to reduce people's misconceptions about patients with IBS, and I also hope that my research will lead to personalized medicine, which could allow for curing IBS as a whole, along with its accompanying symptoms of depression and sleep disorders, on the basis of sex, age, and medical history.

Sex differences in the nature of neurotransmitters released from the brain to the spinal cord, as well as in their effects on colorectal motility 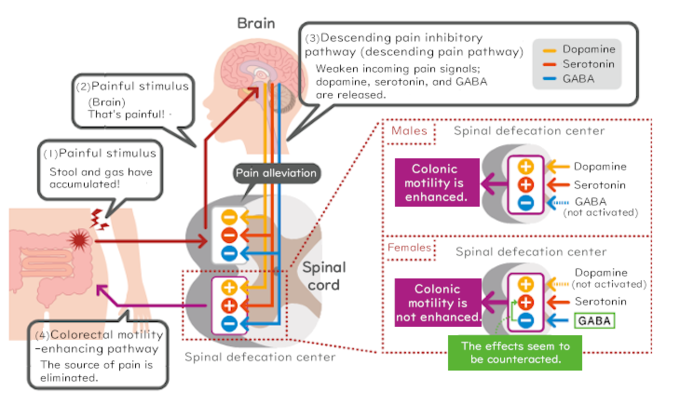 When pain in the rat's large intestine is transmitted to the brain, the brain supplies the spinal cord with neurotransmitters that alleviate pain through the descending pain inhibitory pathway. We discovered that the components of the neurotransmitter differed between males and females, and that there was a sex difference in the defecation control function exerted by the spinal defecation center. In males, the actions of dopamine and serotonin activate colorectal motility, leading to diarrhea. In females, dopamine does not operate, and the action of GABA counteracted the enhancing effect of serotonin on colorectal motility, resulting in constipation. The GABA neurons exists also in males, but GABA had no effect because it was not activated.