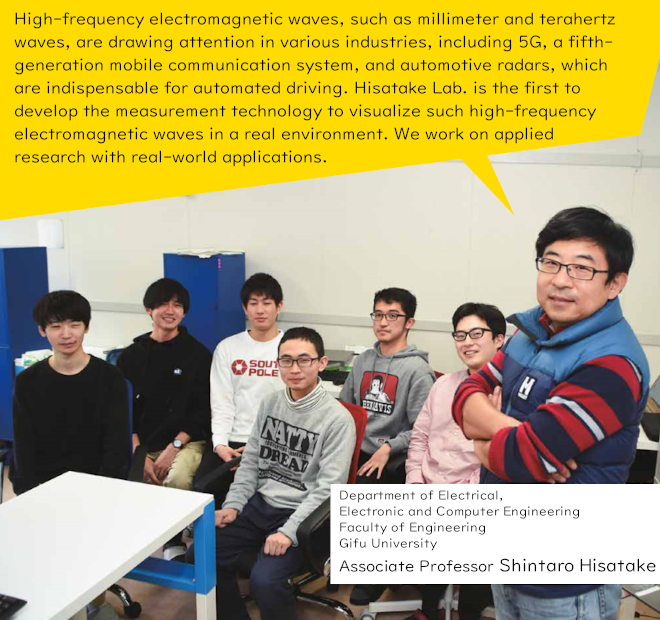 Our laboratory is attempting to develop a new technology constituting a combination of the properties of electromagnetic wages and photonics (opetical engineering). Many wireless communication devices, such as cellular phones and smartphones, use electromagnetic waves of around 1 GHz. However, high-frequency electromagnetic waves*1, such as those in the range of ~6 GHz and 28 GHz, are used for 5G, the fifth-generation mobile communication system, and waves with frequencies of 24 GHz and 77GHz are used for automotive radars, indispensable for autonomous driving. High-frequency electromagnetic waves, called millimeter waves (30 GHz -300 GHz) and terahertz waves (300 GHz - 10 THz), are expected to be applied to various industries, such as high-speed and high-capacity radio communication services and high-resolution radars.
However, to effectively use high-frequency electromagnetic waves, it is necessary to detect some unique patterns in which the electromagnetic waves are emitted in actual-use environments. Some methods are visualized using simulation technology. However, the higher the frequency, the greater the difference between the simulation results and the actual situation. Therefore, this study aimed to develop a technology to measure high-frequency electromagnetic waves with higher precision and accuracy using photonics technology.
We developed the measurement technology based on an academic interest. However, the motivation for considering the social implementations (industrial application) of this study was to participate in the Exploration and Development of Global Entrepreneurship for NEXT Generation, sponsored by the Ministry of Education, Culture, Sports, Science, and Technology.
As a teacher who creates training programs for entrepreneurs, I was trained on the west coast of the United States. As I interacted with local entrepreneurs, I became aware not only of the importance of deepening my research but also of connecting it to businesses that solve problems facing society. Just as I was thinking about this, a business owner, who is also an acquaintance, asked me if I could visualize an onboard radar. At the time, I drove a car equipped with an auto-cruise function that maintained the speed automatically without accelerator operation, and I experienced a fear that the radar would not work well in a tunnel. It was then that I thought that "If we could improve this, it would be beneficial to society."

Looking ahead to the future for social implementation 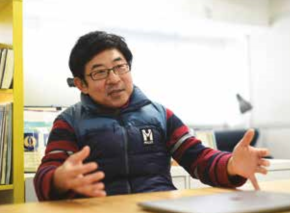 Technology has to be usable not only in the laboratory but also in the real world to be useful in society. In conventional electromagnetic wave measurement methods, it is necessary to input a reference signal from a measurement device such as an in-vehicle radar that does not have an antenna terminal, the measurement target or, a reference signal from the measurement target a cable. When measuring an in-vehicle radar that does not have a terminal to input the signal, it was necessary to modify it, such as by mounting an input terminal to the vehicle. Additionally, as the radiation pattern measurement of the electromagnetic wave was carried out in an anechoic chamber, the measurement was taken in an environment that was far from the actual. Therefore, by making the measurement object and device independent of each other, we devised a method to visualize the spatial distribution of the amplitude and phase of the high‐frequency electromagnetic fields radiated from a wave source without modifying the target. To the best of our knowledge, we are the first in the world to succeed in developing this technology.
Among the electromagnetic fields, the terahertz waveband is still unexploited. In considering the use cases for the terahertz waveband, technology for measuring this is indispensable. Therefore, in 2019, the "Photonic Edge" was established as the first venture capital company certified by Gifu University that originated at Gifu University to enable the widespread social utilization of the developed measurement technology. Photonic Edge is working to measure the basic characteristics of substances in the terahertz waveband, evaluate the performance of the electromagnetic wave absorbing materials, and visualize electromagnetic wave scattering phenomena by vehicle components using the advanced technologies developed at the university. 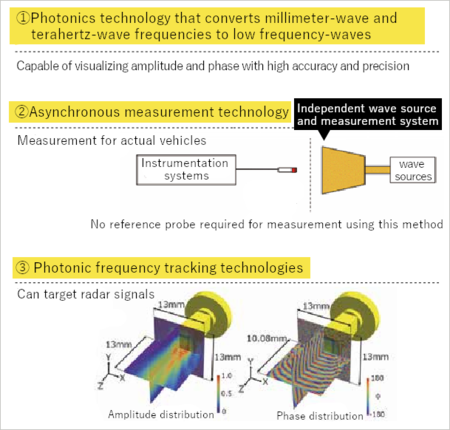 Additionally, in anticipation of 6G*2, the next-generation communication system, antennas are being developed for terahertz radio communication systems. While attempting to visualize electromagnetic waves applied to small cube-shaped dielectrics, I realized that these small cube-shaped dielectrics could be used for small antennas, which led to the development of small antennas for terahertz wireless communications. While terahertz waves enable faster wireless communication, miniaturized, high-gain antennas are indispensable for implementation in smartphones.
We expect that real technological innovation will be created by combining new technologies and industries triggered by the measurement technologies we have developed. While it is important for research and development activities to be undertaken at universities, it is also important to understand how to implement technologies developed from scratch at universities and integrate them into society, using academic interests as the driving force. Through research activities at the university and activities to implement the results in society, I will remain committed to developing human resources who can create innovative technologies to solve social issues.

Successful development of ultra-compact antennas operating in the 300 GHz-band terahertz radio in anticipation of the Beyond 5G/6G era
Although the spatial distribution of electromagnetic waves can be calculated, it is difficult to input the uneven state of an aluminum foil surface into a computer accurately and precisely. Therefore, visualization using actual measurement enables us to grasp the true state of the radio waves.