We developed a next-generation concrete that achieves improved productivity and reduced cost and will lead to extended infrastructure service life. 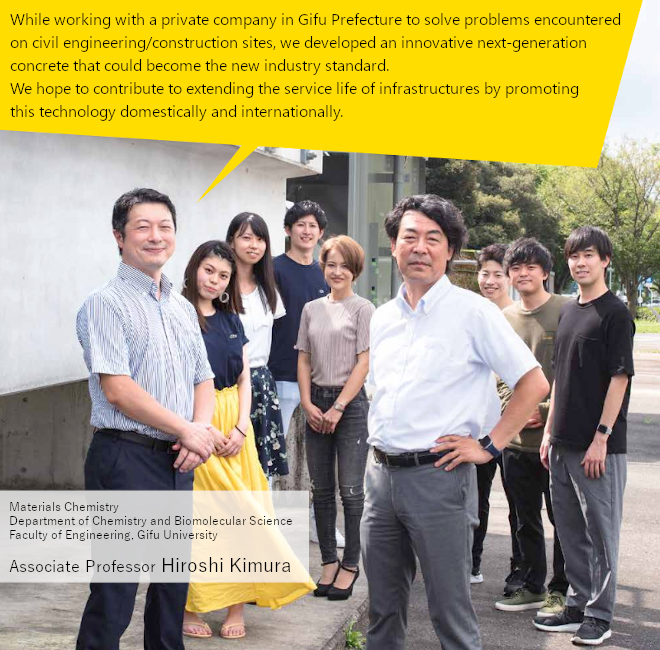 Joint research began as a result of an industry-university networking event at Gifu University. 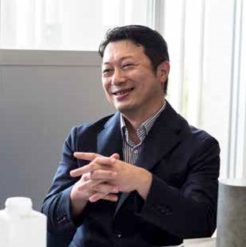 I have been researching electrorheological (ER) fluids for many years. ER fluids are materials whose viscosity changes when an external electric field is applied. Since starting my position at Gifu University, I have pursued research on ER fluids focusing on aqueous dispersions, which are mixtures of fine particles and water.

Within the area of aqueous dispersions, I have concentrated on clay aqueous dispersions. These are mixtures of water and a clay component that is a type of clay mineral. These mixtures solidify when the salt concentration is increased. This solid alternates between a sol (liquid state) and gel (solid state) depend on whether dynamic stimulation occurs, and this is called a "physical gel." I thought about whether this characteristic could be used for something practical when, in 2019, I gave a poster presentation at an industry-university networking event at Gifu University. Here, I met people from Abe Nikko Kogyo Co., Ltd., a company involved in concrete design and construction. We had a discussion about whether the properties of physical gels could be used in concrete, and our research and development of next-generation concrete began.

The concrete used on civil engineering and construction sites is a mixture of water, cement, and gravel that is poured into a formwork and hardens due to a chemical reaction between water and cement. Because considerable effort is required to fill concrete when it is in a hard state, chemicals are added and the concrete is then transported to the construction site in a soft state known as "fresh concrete*1." However, this is costly because the chemicals are expensive and large amounts of cement are required. Another disadvantage is that segregation*2 occurs when the concrete is in this soft state, making the cured concrete prone to weakness. No specific solution to these problems has yet been offered, and concrete that is easy to fill as well as strong and inexpensive has been considered impossible in the civil engineering/construction industry.

Given this situation, we focused on physical gels. The special characteristics of physical gels have often been applied in cosmetics, and the combination with concrete was unexpected. However, the development progressed well, and we have achieved a completely new concrete.

We hope to contribute widely to infrastructure construction in Japan and overseas. 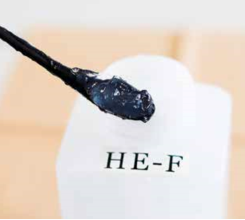 In the next-generation concrete we developed, a small number of clay nanosheets are mixed into the concrete. As a result, the concrete develops the ability of physical gels to retain their shape when left to stand and soften when vibrated. Although the concrete retains its shape and is self-supporting to a certain extent prior to hardening, it is easy to fill and the productivity of concrete work is increased.

Another characteristic of this concrete is that by changing the number of clay nanosheets added as well as the vibration conditions, increasing its fluidity and adjusting its softness without changing the mix of cement and water are possible. This enables filling the concrete while the components are in a uniform state and prevents segregation from likely occurring. In addition, clay nanosheets adsorb excess water in fresh concrete and gradually supply moisture from the inside to the outside, even after curing. This produces a denser concrete composition and improves its durability. Other great advantages are that the number of clay nanosheets added is quite small and the cost is very low compared to conventional chemicals.

We hope that this next-generation concrete exhibiting the performance of physical gels will solve some of the problems encountered in the construction industry. We believe this concrete can also contribute greatly to extending the service life of infrastructures such as roads, bridges, and buildings. Giving back to society through manufacturing that offers benefits by linking research results to preservation and improvement of the global environment is the value of this research work. After commercializing the patented technology for this next-generation concrete, I hope to promote it widely in Japan and abroad in collaboration with various corporations and institutions. 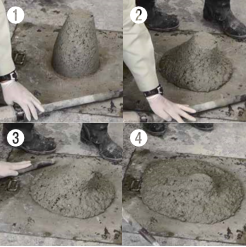 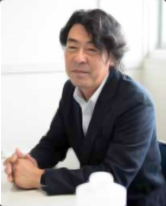 Prior to meeting Professor Kimura, we were seeking to solve problems within the small world of industry. However, by taking part in the Gifu University networking event, we were able to develop an innovative new concrete. Going forward, we want to verify critical aspects such as the optimal additive number of clay nanosheets and we hope to strengthen our PR activities aimed at spreading the use of this concrete.