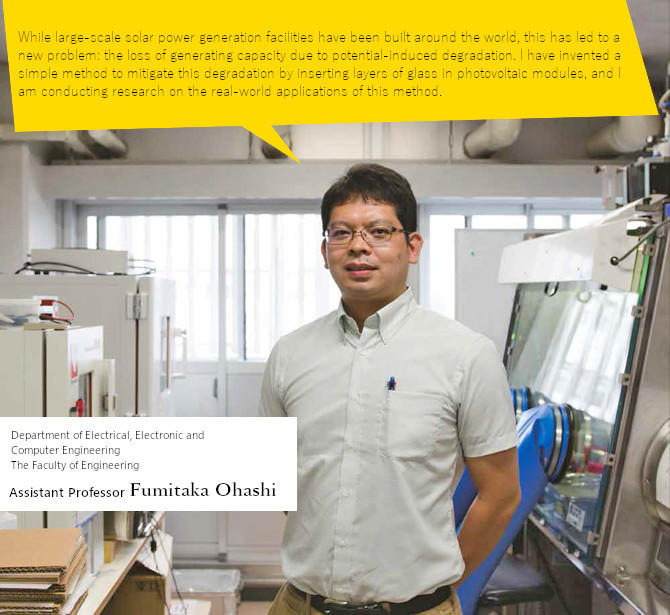 I began research on potential-induced degradation five years ago.

I have loved physics since I was in university. While attending Gifu University, I belonged to a materials research laboratory, where I began research on semiconductors. After that, I studied abroad and subsequently returned to work at Gifu University as a researcher. Wanting to do research that would be useful in everyday lives, I took up research in earnest on solar cells, which are still attracting attention as next-generation energy sources.
After the 2011 Great East Japan Earthquake, the government's push to spread renewable energies rapidly expanded solar power generation throughout Japan. Though solar power facilities have been installed in ordinary homes as well as in large-scale "mega-solar" farms across the country, this has also gradually brought into focus the problem of potential-induced degradation(PID), which causes a decrease in the efficiency of the module to generate power.
The solar panels installed on the rooftops of ordinary homes for power generation are called photovoltaic(PV) modules, whose power is generated by crystalline silicon solar cells. These cells are enclosed in cover glasses and backsheets to protect them from natural phenomena such as rain. However, the power-generating performance of the PV modules can decline for a variety of reasons, and among them is PID, which is caused by, as the name suggests, voltage. In Europe, where renewable energies have made major inroads and many places have mega-solar farms, PID-related decrease in power-generating performance has become a critical concern.
PID is said to be influenced by temperature, humidity, and voltage conditions; however, the exact mechanism by which it occurs remains unknown.
Occurrence of PID was discovered about 10 years ago. However, even if it is detected, the cover glasses and frames surrounding the all-important cell make it hard to examine its causes, which is why very little progress had been made on its research. Then, about five years ago, I was part of a research team at Gifu University that was chosen by the New Energy and Industrial Technology Development Organization (NEDO) to begin research on investigating the causes of PID.
In comparison to other degradation phenomena, PID is characterized by an intense decline in PV performance over a very short time period. You would notice the change if you were constantly observing the state of the PV modules; however, it is quite possible that a PV module left unobserved for a while would generate any power at all by the time you noticed. As it is easy for PID to occur when water adheres to the surface of the PV module's cover glass, caution is advisable in coastal and tropical areas that receive considerable rainfall. Besides water, another suspected cause of PID is the sodium in the cover glasses, which penetrates the internal part of the PV module when the temperature around the module becomes high. The incidence of PID is thus expected to further increase in the future with the progression of global warming, particularly in Japan, whose climate is already hot and humid.

Characteristics of voltage and current before and after the PID tests

"Upon conducting an experiment to check the state of PID after applying high voltage for a short time on an ordinary PV module(a) and another PV module(b) in which a layer of glass was formed between the cover glass and ethylene vinyl acetate (EVA), the current density of module(a) was significantly degraded, while that of module(b) was slight."

"I want to contribute to worldwide power infrastructure by spreading an easy way to mitigate PID." 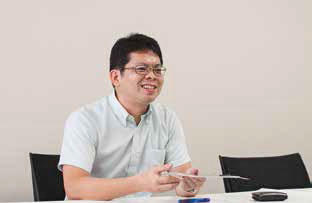 I undertook this research to see if there was any course of action to mitigate PID. As the original cause lies in high voltage, lowering or dispersing the voltage should make it possible to delay the onset of PID to a significant degree. I also thought that blocking sodium from reaching the cell might suppress PID, as sodium is the trigger. Next, I turned my attention to a transparent paint called "liquid glass." When applied to something you want to coat, liquid glass hardens and forms a highly durable layer of glass after being left for some time. Also, unlike ordinary glass, it does not contain a metal, and so I thought that this should reduce the effect of voltage on a PV module. I began my research with the hypothesis that if liquid glass was used in a PV module, the layer of hardened liquid glass would delay the migration of sodium toward the solar cell.
However, to be honest, I had no luck in the beginning. You would think that this involves nothing more than applying liquid glass to a surface; however, a considerable amount of thought needs to be put into how you apply it, because its effect varies significantly depending on thickness and other factors. Upon conducting an experiment to test two different patterns of inserting the liquid glass layer--on top of and underneath the cover glass--I found that both patterns resulted in a clear effect and that the latter pattern had a particularly substantial mitigating effect against the onset of PID.
My research is currently at the stage of conducting experiments on small modules; however, going forward, I plan to verify the effect on larger modules. Real-world implementation will also require further research to be conducted jointly with solar panel manufacturers and maintenance companies. This invention can be introduced without considerable changes being made to the structure of PV modules because it uses liquid glass, resulting in an increase in the lifespan of solar power systems and a decrease in the power generation cost. I think it would be wonderful if I could support the ongoing widespread and rapid use of solar power, and by extension, worldwide power infrastructure.