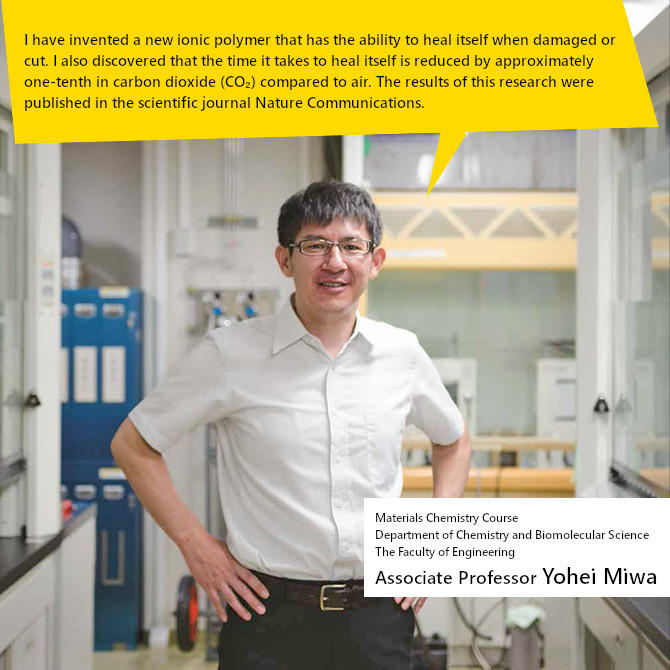 I will take on the challenge of developing a new polymer.

Even when PDMS-xNa is cut into two, the cut
surfaces can bond back to normal almost
completely, without leaving any trace. This
happens faster in CO2 than in air.

I specialize in research on polymers. In particular, I conduct detailed research on the structure of ionic polymers, which are polymers that contain ions in their molecular structure. This time, what I turned my attention to are elastomers; they are elastic materials. Some special elastomers have a "self-healing" property--that is, they return to normal after being damaged--which heat and light were commonly used as triggers. However, sometimes applying heat would impair a product's functionality or it would be difficult to irradiate a light inside a product. That is when I thought that if I could create a new elastomer with a self-healing mechanism that is unlike the existing ones, it could be applied to a variety of products in the future. Therefore, I started doing research with my students.

Ions bound to polymers have the property of aggregating with other ions, which results in the crosslinking of the polymers. The elasticity of elastomers comes from the network structure. Strongly crosslinked elastomers are hard and do not return to normal when cut. However, as joining the cut surfaces together will cause the ions to rearrange themselves on their own into a more stable state if the crosslinking is sufficiently weak, this will crosslink the molecules and cause the cut surfaces to bond back together. We have described the mechanism by which this occurs and successfully developed ionically crosslinked poly(dimethylsiloxane), PDMS-xNa, a gas-plastic elastomer whose crosslinking structure rearranges itself in air on its own.

We discovered that the speed of self-healing varies depending on the type of gas. 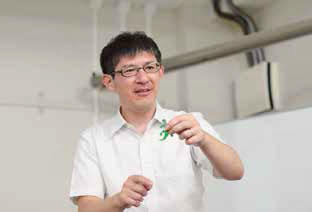 The important discovery was still to come. We had Kenjiro Taira, who was a fourth-year undergraduate student at the time, measure the strength of the PDMS-xNa sample we had produced. When he tested the sample inside dry nitrogen to eject water vapor, which might affect its strength, he said that it had increased slightly. I thought that it was because of the minuscule amount of moisture that remained; however, Kenjiro insisted that it was undoubtedly the effect of the nitrogen. We devised different ways of staging the experiment, repeating it persistently under strictly controlled environments, and proved that the change in strength depends on the type of gas. With this result, we subsequently conducted the experiment inside CO2, which we determined made PDMS-xNa remarkably pliable in comparison to air; that is, the crosslinking weakened, increasing the speed of the elastomer's self-healing. The speed in CO2 was in fact about ten times the speed in air. We were also able to confirm that even environments as cold as -20 °C do not change the way that PDMS-xNa self-heals. In subsequent research, we also explained the principle by which CO2 molecules enter ion agglomerates and weaken their crosslinking.

As CO2 poses little risk to the human body, and it is possible to quickly fill the internal areas of precision equipment with CO2, I look forward to the application of PDMS-xNa in medical fields and wearable devices in the future. Another thing I would also like to research further is the potential for a material that is both strong and self-heals quickly. If that can be done, that should lead to the further development of materials that will be useful for society, which is why I would like to continue doing research.

The mechanism by which it heals itself.

In ionic polymers, ions are bound to a string-like polymer (A). Even after the ions aggregate and their molecules crosslink, the ions continue to move and rearrange themselves (B). When CO2 molecules, shown in yellow, come in between the ions, the ions soften and the speed at which they rearrange increases (C). 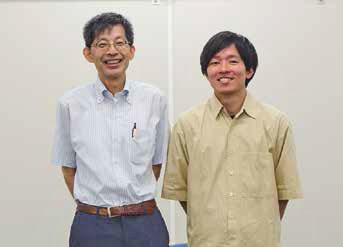 "Ionic polymers are a field with many unsolved problems. In addition to developing materials, the researchers wish to develop methods of analyzing them and identify their mechanisms so that these polymers can be useful to society," says Prof. Shoichi Kutsumizu, who collaborated on the research. Kenjiro Taira says, "We repeated our experiments deliberately so as not to miss any details, and I'm happy that this has led to a new discovery that is worth printing in Nature's sister journal."