Dr. Maki developed the Minimal English Test (MET) to increase efficiency in education and research in the field of acquisition of English as a foreign language, and has published a book on the MET research.

I first developed the Minimal Japanese Test (MJT) to assess the Japanese proficiency of American learners of Japanese, while I was teaching at Salem-Teikyo University in the United States. 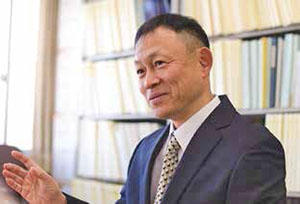 After obtaining a degree from the University of Connecticut (U.S.) in the field of linguistics advocated by Dr. Avram Noam Chomsky (1928- ), I taught Japanese to undergraduate students at Salem-Teikyo University (presently Salem University, West Virginia, U.S.) for seven years. While attending a conference of the Association of Teachers of Japanese, I encountered the Tsukuba Test-Battery of Japanese (TTBJ) and the Simple Performance-Oriented Test (SPOT), both of which are designed to evaluate the Japanese language proficiency of learners of Japanese.
However, it takes 150 minutes to conduct the TTBJ, while it only takes two minutes to conduct the SPOT. In the SPOT, test participants are asked to fill in one hiragana letter for each blank while listening to a Japanese sentence (e.g., 「明日は大事（ ）用があって、行けません（translated as "I cannot go because I have an important appointment tomorrow."）」 The correct answer is "な."). Results showed, however, that there was a strong correlation between the scores on the TTBJ and the scores on the SPOT (with a correlation coefficient of about 0.9), which suggests that it is possible to accurately assess the Japanese language proficiency of learners within a few minutes. The remarkable efficiency of the SPOT inspired me to develop my version of the SPOT, which I called the Minimal Japanese Test (MJT). The correlation coefficient between the scores on the MJT and the scores on the Level 3 of the Japanese-Language Proficiency Test (JLPT) was about 0.8, which proves that the MJT is quite useful as a predictive language assessment tool for the JLPT for American learners of the Japanese language.

The MET can be viewed as a "litmus test" in English language education, and can be widely utilized by educators, researchers and learners of English around the world. 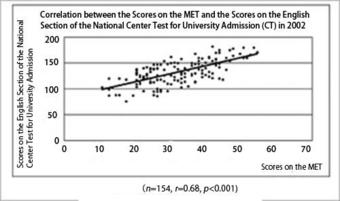 2. Time-Saving
It only takes five minutes to conduct the MET. Therefore, there is little burden on the test takers, and at the same time, researchers on English education can easily obtain reliable data.

3. Effective
The MET resembles a game which increases learner motivation to acquire higher scores. In addition, the MET has a "practice makes perfect" effect, which induces an incentive among the test takers to improve their test scores by repeatedly attempting different versions of the MET.

4. Reliable
My research over the past 16 years is based on more than 10,000 data samples, and the results have consistently indicated that the MET is a reliable measure of the English proficiency of language learners.

The MET is still at the developmental stage. The original version of the MET targeted the correct responses consisting of 4 letters or fewer, but the latest version of the MET follows a simple rule that every 6th word is a target word, regardless of how long the correct word may be. It is worth noting that the other versions of the MET I created where every 8th or 10th word was a target word and the original version of the MET resulted in no significant differences in terms of the correlations between their scores and the scores on the English section of the National Center Test for University Admissions. The latest version of the MET contains about 70 blanks on one sheet of A4 size paper (8.3x11.7 in), and it only takes three minutes to administer. In this sense, the MET is a "litmus test" in English language education, as it can assess the English language proficiency of learners of English within a short span of time (i.e. three minutes).

Alternatively, it is also possible to create different versions of the MET with the same sentences by simply changing the positions of the target words. Furthermore, the MET has a "practice makes perfect" effect, which means that it is possible for the test takers to obtain higher scores (i.e. improve their test scores) by repeatedly trying various versions of the MET. The "junior" Minimal English Test (jMET) for junior high school students was also devised and conducted. Test participants enjoyed taking the jMET, as it evoked a sort of game playing. If the MET is language learner-friendly, it can also be assumed that it is educator-friendly, as the test induces a fun game-like element for the learners, and an efficient and effective language assessment tool for educators. Note that anyone can freely use the different versions of the MET included in my book.

The Minimal Korean Test (MKT) and the Minimal Chinese Test (MCT) are currently in the works as well, which I am sure will contribute to the field of foreign language education. 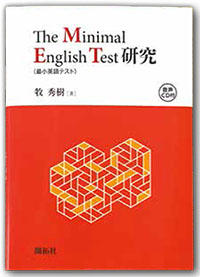 Part of the Questions in the MET