Researching degenerative myelopathy in dogs and taking up the challenge of investigating this incurable nervous disease and developing a treatment. 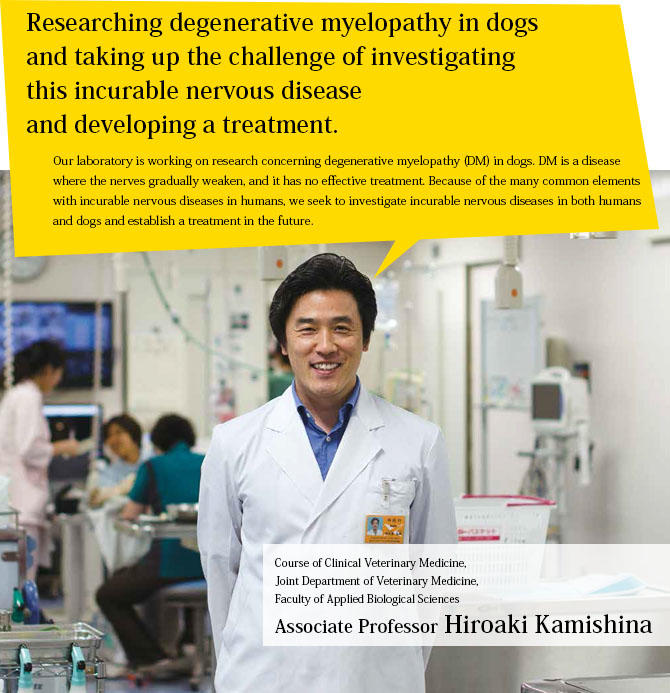 The number of cases of degenerative myelopathy in dogs saw a sudden upsurge triggered by an increase in the number of Corgis kept as pets. 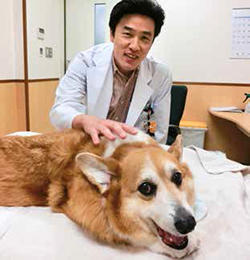 Musashi who cooperated in research

After studying veterinary science at university, I worked at an animal hospital for about five years and then studied at graduate school at the University of Florida. At first, I did research on imaging, such as CT and MRI, but as I moved into my doctoral course, I became interested in degenerative myelopathy (DM)*1 in dogs and started working on research in this field.
DM is a disease of the spinal cord that progresses slowly without causing pain. The nerves gradually weaken without a cause like injury or inflammation. The symptoms begin with paralysis of the hind legs and move to the forelegs and neck. Ultimately, the muscles for breathing weaken, leading to death.
DM was originally a disease that was commonly seen in German shepherd dogs and other large dog breeds. For this reason, it was not regarded as much of a problem in Japan, where large dogs are less commonly kept than in Europe and North America, and it was rare to encounter it in a clinic. However, DM frequently occurs in Corgis, which are medium-sized dogs, and as their popularity as pets grew from the mid-2000s, cases of DM also increased. When I moved back to Japan in 2007, DM in Corgis began to be a problem. Since there had been few cases until then, none of the veterinarians in Japan specialized in DM research. In these circumstances, I became known as the veterinarian who researched DM, and at the peak, I received several hundred requests a year for testing from throughout the country.
The mechanism that depletes nerves in DM has not been discovered, and a treatment is yet to be found. However, a research group in the United States has discovered a gene abnormality that causes DM. This gene codes the protein superoxide dismutase 1 (SOD1),*2 but when it has a mutation, it produces abnormal SOD1 protein, which damages the nerves and causes DM. SOD1 is an antioxidant enzyme that protects cells from stress, and mutant SOD1 protein similarly exhibits antioxidant effects. It is a mystery why it nevertheless injures the nerves, and we want to reveal that mechanism and establish a curative treatment for DM.

We want to reveal the mechanism for DM and link it to treatment for incurable nervous diseases in humans, too. 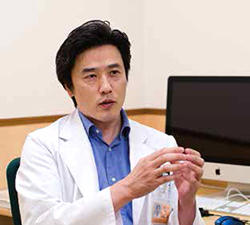 The mutation in the SOD1 gene that causes DM is known to cause amyotrophic lateral sclerosis (ALS),*3 an incurable nervous disease in humans. Therefore, if we can reveal the pathomechanism of DM, it may also provide a link to saving ALS patients. However, while expectations are great, the discovery will certainly not be made easily.
We are currently recording the progress of the illness in dogs with DM and using stored blood and tissue to conduct research. Simultaneously, we are transfecting mutated dog genes into cells grown in the laboratory, causing them to produce abnormal SOD1 protein and carefully investigating how it attacks nerve cells. Through this research, we have already discovered several substances that appear to be effective in suppressing DM, but things do not work the same in a living body as in the laboratory. In some cases, effects were observed in experimental animals for ALS, and they proceeded to clinical trials, but we have not yet found anything that we can say will work.
Still, I believe that our research is superior in that we can measure effects in dogs that have developed the disease naturally, rather than mice. Dogs are overwhelmingly closer to humans than mice, and there is a difference from illness deliberately induced in the laboratory. Mice in which ALS is induced die within a few weeks, but DM in dogs progress over a longer time, allowing us to determine effects in conditions that are close to humans with ALS.
Soon, we will begin the 3D structure analysis of the SOD1 protein with the cooperation of researchers from the university who specialize in protein structure analysis. We will accelerate research aimed at pathological investigation. Further, we hope to simultaneously move forward to developing therapy and conduct clinical trials within three years. Then, in the future, we want to conquer DM and find a breakthrough towards the treatment for ALS.
Recently, we received the kind donation of a beloved dog that had died from DM from an owner who supported our research. We are keen to solve the illness as soon as possible, to respond to the expectations of the owners who support our research. 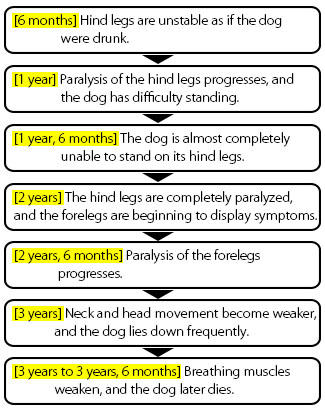 ※2. Superoxide dismutase 1
An antioxidant enzyme that protects cells
from oxidative stress. It is known to be the
gene that causes DM and ALS when it
mutates. 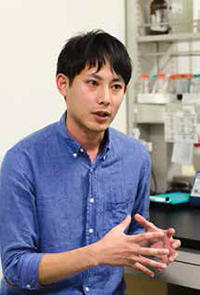 I was shocked when I saw a dog that had contracted DM in the animal hospital where I worked after graduating from university and decided to work on research under Professor Kamishina with the idea that we may be able to find a way to cure it. At present, to investigate the mechanism of the disease, we are analyzing the structure of the SOD1 protein causing DM. I wish to contribute broadly to veterinary science and human medicine through this research.