I am studying methods to create bacteriophages artificially. 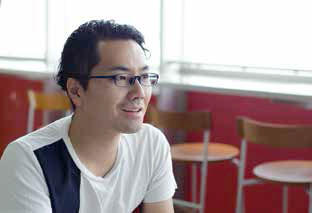 My specialty is the field known as "synthetic biology." I learned bacteriology when I was an undergraduate student and researched pathogenic bacteria such as O-157, which caused mass food poisoning in Sakai City, Osaka at the time. After getting my degree, I moved from Osaka to Tokyo and mainly researched drug-resistant Mycobacterium tuberculosis that is a causative pathogen of human tuberculosis. Around that time, "synthetic biology" was beginning to attract attention. Synthetic biology is a new area that started in about 2000 around MIT and in the field researchers study methods of artificially creating life itself and biological systems. My interest piqued, I went to MIT and began research combining bacteriology and synthetic biology--the same research into the creation of artificial bacteriophages that I am working on.

Bacteriophages are viruses that infect bacteria. Many have the characteristic of killing bacteria, and "phage therapy," which uses them to treat bacterial infections, has also been heavily researched. However, once penicillin was discovered from blue mold and antibiotics began being used in treatment, phage therapy was forgotten. In recent years, however, the emergence of drug-resistant bacteria, which antibiotics do not work on, has become a problem. Resistant bacteria appear for each kind of antibiotics, and for some resistant bacteria, no medicines work at all. Thus, bacteriophages, which are bacteria's natural enemy, are attracting attention again.

I want to resolve the problem of drug-resistant bacteria by developing a next-generation platform.

Bacteriophages exist in great numbers in nature, but I am studying methods to modify them and use them as pharmaceuticals artificially. Phage therapy is effective against resistant bacteria as well, and it offers the benefit of lower development costs compared to conventional new drugs. On the other hand, bacteriophages are host specific, and the bacteria that each can infect are narrowly limited. They could be considered safer than antibiotics, which kill bacteria broadly even if they are beneficial, but to use bacteriophages for a wide range of treatment purposes, they need to be modified so that they can respond to many bacteria. However, when I began my research, there was no way to modify bacteriophages. Given this, I started by making a world-first platform to modify bacteriophages.
Development of the artificial synthesis platform reached the stage of prototyping within about six months. First, the required DNA parts are designed on a computer, and then the actual parts are combined and built into a synthetic bacteriophage and began using the platform that I developed. This has enabled bacteriophages with specific functions to be made artificially. Using this method, I have successfully modified a T7 phage to infect Escherichia coli and generated an artificial bacteriophage to infect Klebsiella, which causes pneumonia. Since commencing work at Gifu University, I have received the Kuroya Award from the Japanese Society for Bacteriology in recognition of my unique research and worked on research into a next-generation platform that extends conventional methods.
I wish to construct a new platform and move forward with further research aimed at solving the problem of drug-resistant bacteria. Additionally, attention has recently focused on the deep relationship between microbiota and health and illness and, in the future, I would like to establish a method of editing microbiota as you like by creating artificial bacteriophages that only kill the harmful bacteria in the gut and leave the beneficial bacteria, thereby contributing to human health.
Bacteriophages have a very wide scope of application and are already in use in meat processing plants in the United States as a spray to prevent food poisoning. Japan has various regulations that slow the progress of clinical trials, compared to Europe and North America, but bacteriophages could dramatically change the future of every industry, not just medicine. As the driving force behind phage therapy in Japan, I want to continue to press on with research in this field.

A virus whose name means "eats bacteria." They adsorb to bacteria, open a hole in the cell membrane and multiply inside, thus killing the bacteria. Most are composed of a regular icosahedral head section and a tail section with legs and a drill for opening holes in cells.

The property of taking only certain creatures as a host. Bacteriophages are highly host specific and infect only extremely limited bacteria. The clever use of this property will enable the development of drugs that exhibit effects only on specific harmful bacteria.