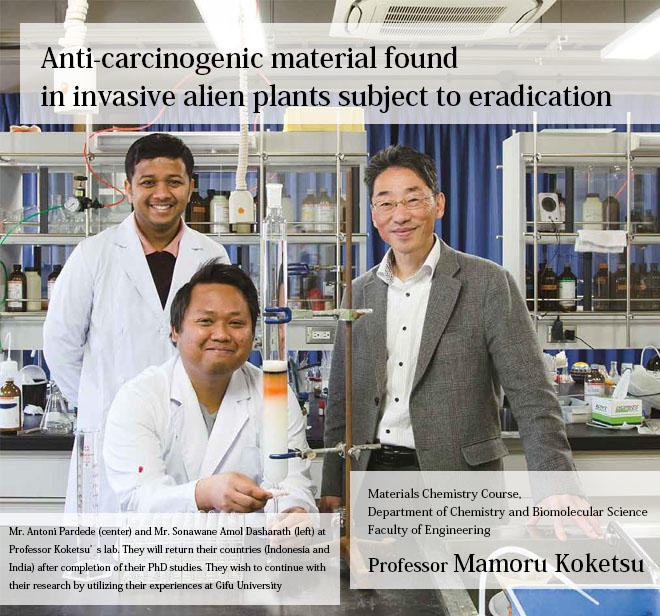 The subsistence of our lives depends on innumerable organic compounds such as food, medicine, and agrochemicals. Our bodies are also composed of organic material like proteins, fats, and carbohydrates. We consume food every day to maintain our health. When we get sick, we take nutritious meals or medicine. Humankind has acquired plentiful health-promoting knowledge from nature, but there is still an abundance of natural phenomena that are unresolved even with modern technologies. Our team has been implementing research on medicinal plants, analyzing their chemical compounds and their potential effects on humans. 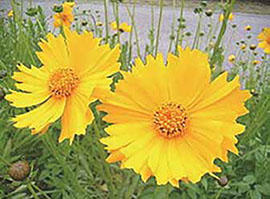 We began to study the compounds found in Coreopsis lanceolata (belongs to the Asteraceae family) five years ago. In the spring, beautiful yellow flowers bloom on roadsides, riverbanks, etc. Although they were initially imported from North America for ornamental purposes, they pose a great threat to many domestic species because of their rapid spread across the country. The planting of C. lanceolata is prohibited in Japan, and extensive elimination campaigns are underway. In reality, however, most of them are allowed to grow due to the high cost of elimination. Our team has been studying the possibilities of effectively using C. lanceolata. We believe that adding extra value to the flowers may offset their high eradication costs, and can eventually restore the original ecosystem in this country. 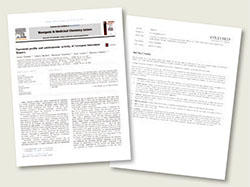 Our team gathered a large volume of C. lanceolata flowers in and around the major roads in Gifu City. In the lab, we first separated the stalks and flowers from the plant, then soaked the flowers in methyl alcohol for about a week. Next, we filtered the solution and the filtrate was concentrated. Obtained methyl alcohol extract was partitioned with three different solutions (n-hexane, ethyl acetate, and n-butanol), we confirmed a high content of flavonoids in the ethyl acetate fraction. Flavonoids are organic compounds found in nature, whose medicinal functions and health promotion properties have been widely reported both at home and abroad. We recognized that C. lanceolata is rich in flavonoids, an indispensable substance to produce the yellow pigment. Based on the hypothesis that flavonoids can prevent the spread of cancer cells, we tested cytotoxicity of the ethyl acetate fraction on human leukemia cells, and observed far better cancer preventive effects of the fraction than expected.

【Results when flavonoid compounds were
added to human leukemia cells】 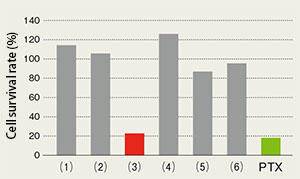 Our team continued to isolate flavonoids from the ethyl acetate fraction in order to identify which compounds prevent cancer cell growth. By operating large analysis instruments, we isolated and determined chemical structures of three types of flavonoids such as three chalcones, one flavanone and 2 aurones, all of which are rare types of flavonoid. Among others, we successfully isolated 4-methoxylanceoletin which is one of chalcone and is very rare compound in nature. There were only 2 publications regarding 4-methoxylanceoletin. When we reassessed them with human leukemia cells, 4-methoxylanceoletin showed strong cytotoxicity on cancer the cell. We confirmed that the effect of 4-methoxylanceoletin is as effective as that of paclitaxel which is one of the most powerful anti-cancer drugs widely in use to treat cancer patients.
Our team also studied other chemical compounds found in edible and other types of chrysanthemums and confirmed that six compounds from C. lanceolata were not detected in these chrysanthemums. Two of our research conclusions were C. lanceolata possesses a larger quantity of flavonoids than other chrysanthemums and flavonoids have strong anti-cancer effects.
Even if we pick flowers of Coreopsis lanceolate, they can spread as long as their roots remain deep in the ground. We need to dig out all the roots for complete elimination, but it takes time and needs extensive manual labor and money. People also hesitate to dispose of them because of their beautiful yellow flowers. The first priority, therefore, is to let people know that C. lanceolata is an invasive alien species in Japan.
Our team discovered chemical compounds that may prevent the spread of cancer cells growth, but it takes years and enormous funds to develop new medicinal drugs from these compounds. Our team hopes that the latest research results and findings will provide more accurate information about C. lanceolata for people in Japan. Most plant compounds are still unknown to us and our team is committed to make a genuine effort to bring our research outcomes back to the community in collaboration with the private sector in pharmaceutical sciences, agricultural chemicals, and food businesses in the years to come. 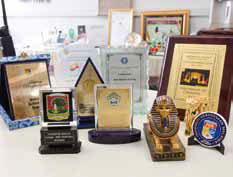 Honors and commemorative gifts that Professor
Koketsu received from universities overseas.
He wishes to invite more international students/
researchers to Gifu University to push forward
the university's internationalization efforts.
He expects that many more global-minded Gifu
University students will play a leading role on
the global stage in the future.

My research has been greatly supported by students/researchers from Southeast Asia etc. For instance, with their assistance, we isolated and analyzed several compounds from medicinal plants indigenous to Southeast Asia. Later, our team proved that they are useful for the development of anti-cancer drugs and have antioxidant effects as well.
I visit foreign developing countries for example Sumatra, Indonesia several times every year and often feel that the research environments there are not always ideal. Researchers have little access to high-performing instruments, and it may take more than one month for chemical reagents to be delivered to the labs (in Japan, it can be delivered the following day). During my visit, I introduced well-endowed research environments of Gifu University to international students and researchers of developing countries. We have so far received so many of the world's best talented students and researchers from Southeast Asia etc in Gifu University. They are all diligent, eager to learn, and strongly motivated for success. Japanese students are gaining inspiration from them, too. After returning to their home countries, these students and researchers will utilize their expertise and knowledge as scholars and teaching staff in the future. I am convinced that our research network will continue to expand not only in Japan but also around the world.