We're developing a technology to measure volume with sound. It lets us control crunchiness and that mouth-melting feeling! 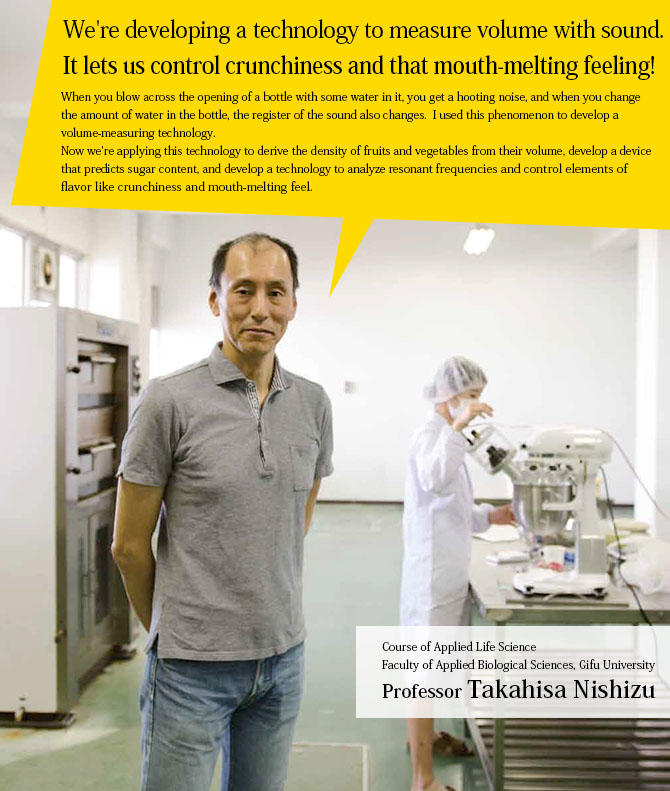 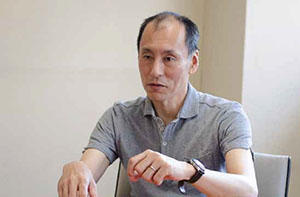 My area of specialty is food engineering, and within the field, I'm engaged in research on "physical properties." By properties, we mean physicochemical characteristics, which become much involved with things like crunchiness, mouth-melting, and other aspects of mouth feel. I developed a volume-measuring technology which uses Helmholtz resonance, and I'm researching ways to control mouth feel by monitoring changes in physical properties.

Helmholtz resonance is the phenomenon where you hear a hooting noise when you blow across the mouth of a bottle. Since the register of the noise changes according to the volume of the container's contents, you can measure volume by investigating changes in the resonant sound. Typically, when you determine volume, you use a method involving the Archimedes principle of measuring the amount of water that overflows when a material is immersed in water, but this method requires that the object be immersed in a liquid, which is unsuitable for foods. There are also laser-based measurement methods, but these require considerable time for scanning. The new technology for measuring volume according to changes in sound is a new technique that compensates the existing drawbacks.

This measuring technology can be applied to many things, and what we've developed is an apparatus for predicting the sugar level of kiwi fruit. Kiwi fruits are ripened after harvest to convert their starch into sugar and bring out sweetness. So until now, it hasn't been possible to know their final sugar level at harvest. But if density can be measured, the amount of starch is known, and sweetness after ripening can be predicted. So we produced a density measuring apparatus which uses a Helmholtz resonator to allow measurement of kiwi fruit density.

Inspection device measures the density of all kiwi fruits and predicts final sugar level for
each individual fruit after ripening. Fruits traveling on the conveyor belt pass into an open
Helmholtz resonator, and their resonant frequency is measured. Density is derived by
calculating volume and mass, allowing prediction of sugar level.

This measurement technique using Helmholtz resonance can be used without regard to liquids or solids. However, we did have a problem when measuring bread dough. Though the dough had clearly risen, and we expected the resonant frequency to increase, we didn't know why it decreased. The reason was air bubbles. Air bubbles in the bread had absorbed some of the sound and lowered the resonant frequency. So I thought that I would instead attempt to make use of this change in frequency. Bread has a quality indicator known as "texture", and with beer too, foaming determines flavor. Based on changes in resonant frequency, we assigned a numerical value to elements such as bubble size and volume, and texture. This allowed us to modify operating parameters in real time based on measurement results and get the flavor we expected.

I hope to understand the relationship between the physical properties and flavor of foods. 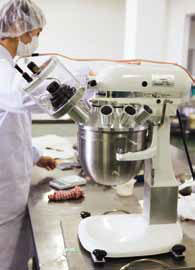 Resonant frequency inside the bowl
of a mixer is measured by attaching
acoustic tubes and a speaker.
Changes in the volume of whipped
cream and other foods are measured
during mixing and allow the fineness
of texture and other properties to
be determined numerically.
A consistent amount of foaming can
be achieved by stopping mixing at
the appropriate time.

Currently we're working together with beverage and confectionery manufacturers to pursue research on methods for evaluating things like bubbling and crunchiness. Working in partnership with industry outside academia, we've developed and marketed software for volumetric measurement based on Helmholtz resonance. In addition to personal computers, it's also compatible with smart phones and tablet terminals and can be used easily by anyone. In the future, I'm hoping that it won't be limited to just factories, development sites, or research facilities, and that it will find widespread use in ordinary households, much like a "scale" for measuring weight. 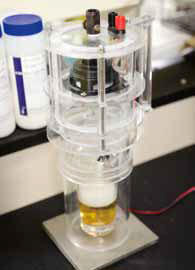 Apparatus measuring beer bubble
quality. The use of an acoustic
resonance technique allows
measurement of beer bubble
texture and foaming, as well as
head and other properties that
greatly determine consumer
palatability. The system is potentially
useful for product development by
industry, and joint research with
beverage manufacturers and others
is already underway.

The physical properties of foods are intimately linked to human sensation, but many aspects are subject to individual subjectivity, so these relationships remain unexplained. I hope to explain these aspects scientifically. Recently, we've also begun an initiative we call "humans as sensors." For example, we're considering testing in which we measure the vibration that a person perceives as crunchiness and determine whether we can produce the same sensation by artificially creating only the distinctive vibration that's part of the sensation.

What we hope to do by trying out different experiments is to gain, even slightly, a better understanding of the relatedness between the physical properties of foods and human sensation.