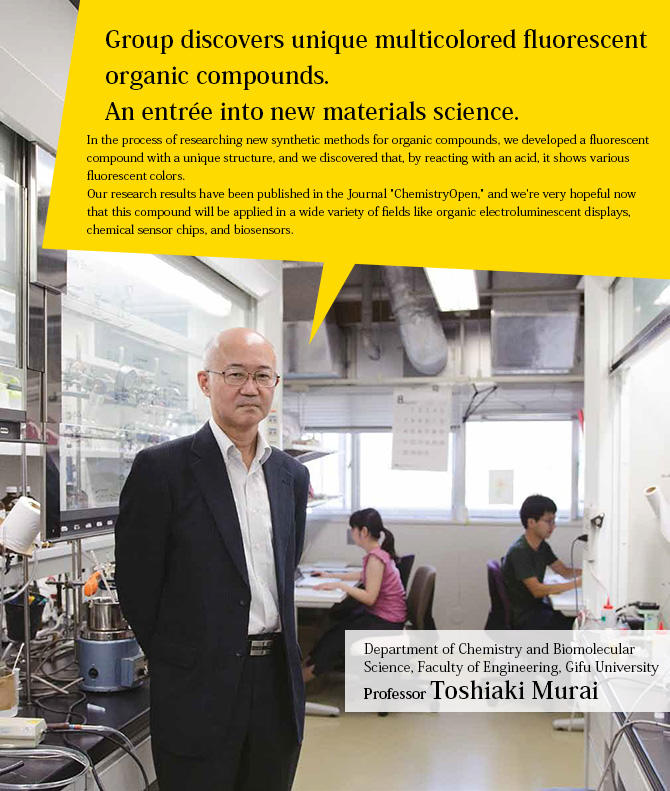 We discovered that a compound we encountered by chance in our research process emitted multicolored fluorescent light, and that when an acid is added it emits white light.

From the time I was a student, I had an interest in the field of organic chemistry, and what I chose as a research path in the field was synthetic organic chemistry. Synthetic organic chemistry is a search for ways to create new bonds between elements, or to cut these bonds, and a discipline that uses these techniques to deliver natural and non-natural organic compounds. Generally, among the many elements, the focus tends to be on elements like carbon, nitrogen, oxygen, and hydrogen that are part of many compounds, but the periodic table includes more than 100 elements, each with different, individual properties, and these can also be bound together to produce new compounds not found in nature. Many scientists have worked in the field since the nineteenth century, and I also saw its great appeal and potential. 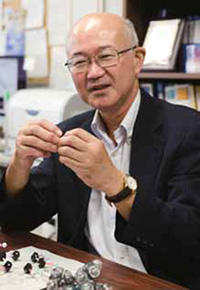 The first compounds that I synthesized were all colorless and transparent, so I wasn't focused on color from the outset. The turning point came when I had finished my PhD in engineering and was working as a researcher at the University of Texas, and I succeeded in synthesizing a new, green compound for use in things like magnetic resonance imaging (MRI) contrast media. There were so many compounds that were colorless and transparent, I realized that there was a global significance to this first compound with a color.
Later, when I returned to Gifu University and continued my experiments, I discovered a new synthetic method called a "three-component coupling reactions." Generally, when you put three compounds A, B, and C in the same reaction vessel, you just end up with complex compounds due to the many combinations going on, but I discovered that when you use a particular compound containing sulfur, you get a neat chain of reactions. This could be a very valuable process for synthesizing substances used as therapeutic drugs in things like Alzheimer's disease. During the further research on coupling reactions, we accidentally found nitrogen-containing small molecules, which were later found to show multicolored luminescence. 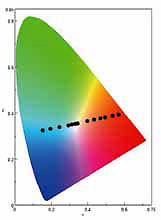 (Figure 3) Color coordinates for the fluorescent
compound. The color emitted changes linearly in proportion
to the amount of acid added.

There are a lot of compounds that glow with colors like red or blue, and their molecular structure is essentially flat. But in the compound that we discovered, a cyclic component of five atoms known as a five-membered ring, and a component with an embedded nitrogen atom formed a large, twisted structure (Figure 1). And we found that when the external ring of this twisted component was changed in some way, deviation developed, and different color appeared.

Up until then, apart from a few examples, it was just accepted that compounds luminesced in a monochrome color. But when the compound that we discovered is brought to reaction with an acid, its color changes into multiple colors, which differ depending on the acidity (Figures 2, 3). However, when we did experiments using ordinary acids, just like acetic acid, we observed that the color of the compound changed from blue to orange, and that when enough acid was added to change the color to orange, the intensity of the luminescence decreased, and there were no more attractive luminescent colors.

Film coated with fluorescent
compound. When illuminated
with black light, the film emits
a different fluorescent color
corresponding to its acidity.

So when we tried different acids and made some structural innovations at the molecular level, we were able to produce vivid colors up until orange was reached. Typically, white luminescence is produced by combining multiple compounds that luminesce in different colors, but what we found was that white can be produced from these compounds as a single luminescent compound by adjusting the ratio of acid and base (alkali). We also learned that even after an acid is added to change the luminescence to orange, if a base is added, the original blue color can be reproduced.

In the future too, I'd like to be the sort of person who pushes into overlooked areas and explores.

This new fluorescent compound is an organic compound, and one advantage is that it's much easier to work with than inorganic compounds that have been used in things like conventional fluorescent lamps. You can dissolve it in water or set it into a film, and we see application in a wide range of fields. It has potential for widespread use in items where cost or durability is still a problem, like organic electroluminescence or organic electroluminescent displays, or chemical sensors for detecting toxic substances.
I always approach my research with the awareness that, "if you build it, they will come." Of course, there's a great significance to doing deeper and broader research in a field that's already active, but personally, I'd like to be the sort of pioneer who develop unexplored ground. Looking carefully in fields where there's no one else, seeking, overlooking nothing that's new to discover. I'll be that sort of person in the future too. 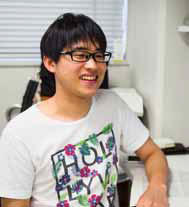 While I was involved in various experiments in the Faculty, I selected the Murai Laboratory because I became very interested in organic synthesis where I could produce new compounds on my own. Currently I'm doing an experiment to investigate how the acidity of boron compounds changes light. It is difficult, but when, after a lot of trial and error, you get the results you expected, there's a great sense of achievement.