Through a public experiment in Yaotsu Town, our goal is to construct next-generation infrastructure centered around hydrogen energy. 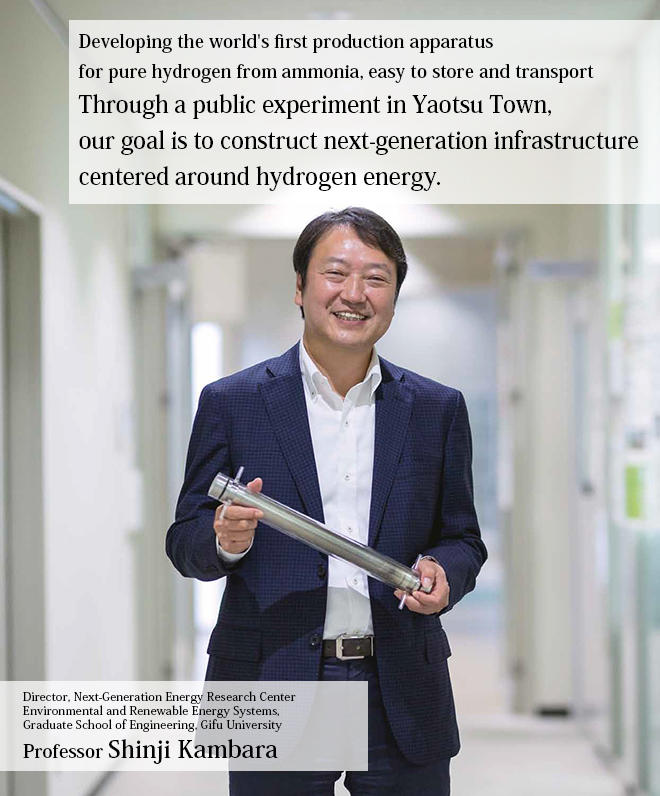 "Fuel cells" that produce electricity by creating reactions between hydrogen and atmospheric oxygen are a current focus of next-generation energy. Since my student days, I've been involved in coal gasification research, and for a long time after I joined the private sector, I worked in research and development on thermal power generation using primarily coal. After that, when I felt that I wanted to work on non-coal-related research, I became an assistant professor at Gifu University in 2003. People said then that a "hydrogen society" would become a reality in the near future, and I also felt personally that hydrogen energy had tremendous potential.

I first began full-scale hydrogen energy research about five years ago, and up until then, I'd been working on research to reduce the environmental burden of NOx (nitrogen oxides) as an atmospheric pollutant by using ammonia to detoxify NOx. But in the process of developing methods for decomposing and eliminating NOx using plasmas, I discovered that it was possible to produce hydrogen from ammonia very easily using a plasma. And in 2011, my development of this discovery resulted in the world's first method for production of hydrogen through the use of an atmospheric-pressure plasma to decompose ammonia into hydrogen and nitrogen at ambient temperature, and without a catalyst.

In previous catalytic reaction methods used to decompose ammonia, you needed to heat ammonia to a high temperature of 400 to 800°C, and the catalyst also used expensive precious metals, which was bad for energy efficiency and very costly, but the "ambient temperature, non catalytic hydrogen manufacturing method" that we developed was a revolutionary method that solved these sort of problems. However, as in previous methods, unreacted ammonia remained behind and created problems for use in a fuel cell without further processing of the hydrogen produced. So in 2012, we completed joint development of a "plasma membrane reactor" with the electrical and electronic products manufacturer Sawafuji Electric. This is an apparatus that allows us to decompose ammonia at ambient temperature using an atmospheric-pressure plasma, and also to extract only hydrogen uncontaminated by residual ammonia. This made it possible to double the decomposition rate of hydrogen and produce what's regarded as high purity hydrogen, a level of 99.999% purity. We also developed a prototype hydrogen production apparatus which combined both the reactor and a high-voltage power source used for plasma production. And we confirmed that we could use hydrogen produced by the apparatus to generate power from fuel cells. 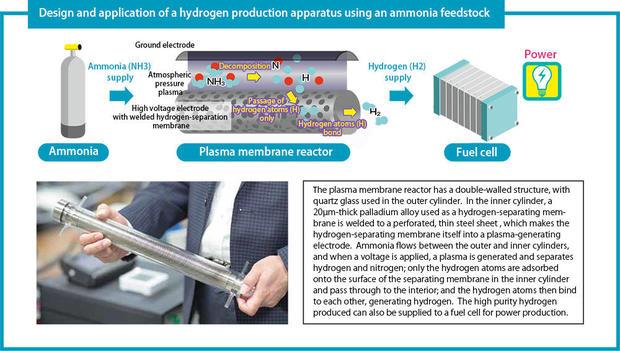 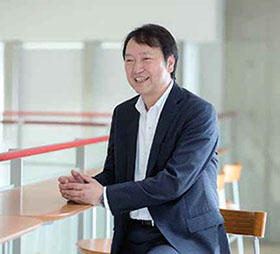 Major problems with hydrogen are its essential low weight per unit volume, requiring liquefaction or high-pressure compression for storage or transport, and difficulty in handling. Consequently, ammonia is of interest for its ease of handling and low cost. Use of the new hydrogen production apparatus that we developed could allow ammonia to be stored and transported for decomposition and then production and supply of hydrogen whenever and wherever needed. If this were the case, developments in hydrogen energy applications, things like hydrogen fueling for fuel cell vehicles, which are now drawing attention; setup of hydrogen fueling stations; and development of fuel cell power plants-- these could reach a tipping point in society.

Our research and development experience thus far has given us a real awareness of the huge potential for hydrogen as a next-generation energy source. In 2016, Gifu University, Yaotsu Town, and three private firms entered into the "Industry-Government-Academia Partnership for Hydrogen-Based Society." A public experiment using Yaotsu Town as a model locality is now underway with the goal of building new, hydrogen-based energy systems and a focus on creating a hydrogen society. The basis of this public experiment is the work of Professor Shuichi Nonomura, the previous director of the Gifu University Next-Generation Energy Research Center, and his call for greater development of renewable energy in the upland areas of Gifu Prefecture. 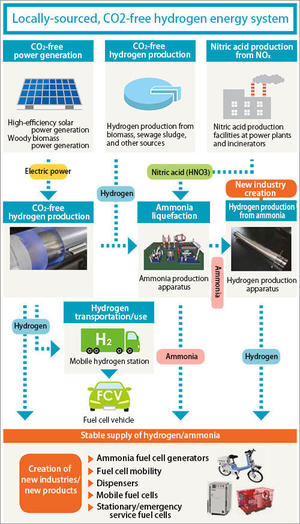 The topic of this public experiment is to build a "locally-sourced, CO2-free hydrogen energy system." Specifically, production of hydrogen from decomposition of water into oxygen and hydrogen using power produced from a solar generating station to be built in Kutami, Yaotsu Town, and from woody biomass. Additionally, in the future, we also like to produce hydrogen from other biomass and things like sewage sludge, and to build a system for transportation and supply through mobile hydrogen stations. We also hope in the future to build systems for converting excess hydrogen to ammonia, storing and transporting it in the form of ammonia cylinders and converting it to hydrogen where power is used.

So what were hoping for is that by building systems that use clean hydrogen energy produced locally in Yaotsu that emit no CO2 in their usage phase, the project will not only provide locally-sourced energy to ordinary households, it will also provide clean energy at low cost to factories and serve as the spark that lures industry to the region. And while we're building a system for a stable supply of hydrogen, we're also engaged in development of mobility and mobile products made possible by fuel cells, and amid these efforts, what we see as a particularly promising new industry is industrial fuel cell generators. Compared to conventional diesel generators, they're quieter and produced no exhaust. Outside of Japan, there are many areas not reached by power transmission lines and where generators are used, so if commercialization were successful, we anticipate a worldwide market.
.
Our future goals are, first, to keep the public experiment in Yaotsu on track. We feel certain that new products using fuel cells will gradually emerge from this project. Actually, last year, we prototyped a fuel-cell, electromotive-assisted bicycle, and we're currently in the process of planning for its installation at the township offices for use by visitors. We'd also like to sell small, battery-sized ammonia cylinders at convenience stores to make it possible to produce power anywhere using a fuel cell generator.

The hydrogen energy systems on which we're working will have a major impact that dramatically changes the orientation of existing infrastructure in society. In regions where population loss is continuing, production of locally-sourced, clean energy will become a model for local revitalization. Our future research will expend its efforts on pioneering this sort of infrastructure of the future.

It may still be a pipe dream,
but I get very excited
when I think that the technologies
we've researched will find their way
into the world and change society 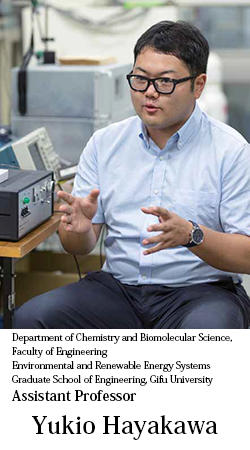 I joined Professor Kambara's laboratory as an undergraduate and stayed through my masters program, then worked for about two years, returned for my doctorate, and as of this year I'm working here as an Assistant Professor. The reason why I picked Professor Kambara's laboratory is that I was drawn to their conscious thinking about how they can help society, and that there are very well-defined practical applications.

My research is a continuation from the work I did in the lab during my doctoral course and deals with atmospheric pressure plasma for obtaining hydrogen from ammonia. Similar technologies for obtaining hydrogen include pyrolytic catalysts, but these require three processes: decomposition, generation, and separation. In our method, the fact that everything from decomposition to separation can be done in one step is a great advantage and provides high-purity hydrogen continuously. But despite the fact that ammonia has a simple structure of nitrogen and hydrogen bound together, it doesn't work as well as you may think when you try to get efficient decomposition. This is a difficult aspect of our research, but it also has its interest.

Though it still sounds like something far-fetched, when I imagine that the basic technologies we've researched and developed will in the future find their way into the world and change society, I get very excited, and that itself, I think, is the greatest pleasure of being involved in this research.

The clear program to contribute
to a hydrogen energy society
also makes the work very
worthwhile. The goal is to link
our current research to product
commercialization. 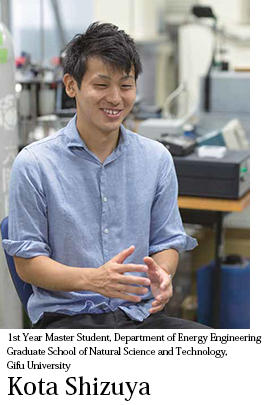 There are a number of reasons why I chose Professor Kambara's laboratory, but one is that when a took a class with Professor Kambara, I listened to stories from his time working in the private sector, and I was able to see the work in my future, which appealed to me for the strong links there were with the private sector. And when I was an undergraduate in the Department of Chemistry and Biomolecular Science, my personal impression of the different fields like polymer chemistry and organic chemistry was that each was extremely complex, and I couldn't quite get a picture of how they could be applied for practical purposes in the future. In this respect, Professor Kambara's research had a clear direction of contributing to a hydrogen energy society, which seemed completely appealing to me.

Currently I'm involved in experiments to produce hydrogen from ammonia using a plasma membrane reactor, and in the Kambara laboratory, when you apply to do a new experiment, no one will tell you not to go ahead. There's respect for student independence, and having participated in conferences and other events, I understand that they want to give us a desire to become engineers who are part of society. Which is all the more motivation for me to have a career that doesn't tarnish the name of the Kambara laboratory, and if we're able to link the hydrogen production apparatus with which I'm currently involved to product commercialization and give it widespread adoption, I would be happy.