In the field of "RNA drug discovery", where next-generation treatments lie, we've made five reagents viable for cancer and other treatments. 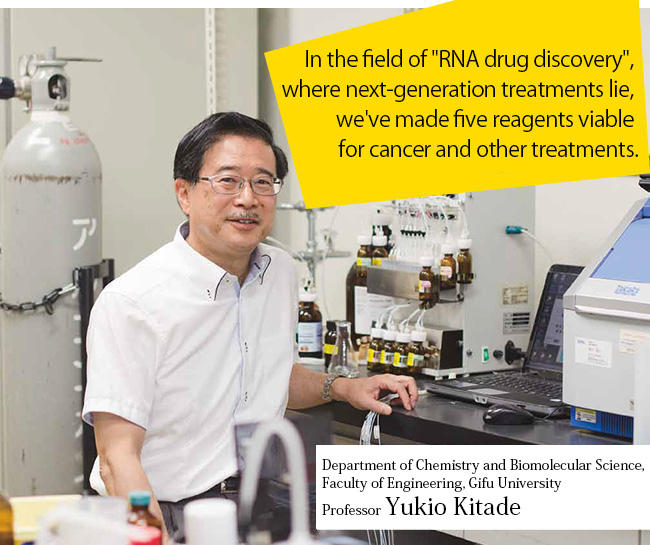 My research areas are basic research and applied development for the development of pharmaceuticals, but even in these areas, and particularly in recent days, I've focused my efforts in a field known as "RNA drug discovery."
RNA is a nucleic acid which acts according to genetic instructions to produce proteins. Recently, we've come to understand that a short RNA known as "microRNA" plays a part in the process of protein synthesis, and causes a phenomenon known as "RNA interference", which inhibits the activity of things like cancer genes. The work of our research is to make use of RNA interference to try to produce new drugs. 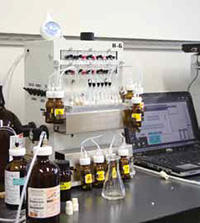 DNA-RNA auto-synthesis apparatus
installed in the laboratory. Stable RNA
usable in therapeutic drugs is synthesized
not only by modifying functional molecules,
but also by altering natural RNA sequences.

"MicroRNA" plays a crucial role in the development and differentiation of cells. Some 2,600 varieties have been found in the human body, and of these, approximately 10% are implicated in serious illnesses. We've learned that diseases like colon cancer, breast cancer, melanoma, and bladder cancer occur more readily when levels of microRNA decline. And I'll mention that, in this field, Professor Yukihiro Akao of the United Graduate School of Drug Discovery and Medical Information Sciences is actively engaged in leading research on topics like the relationship between "microRNA 143" and colon cancer; Professor Akao is also engaged in joint research with our laboratory.
In these sort of ways, RNA is potentially useful as a pharmaceutical, but on the other hand, one of its characteristics is that it's easily decomposed by enzymes in the body, and its resistance to these enzymes would need to be increased for use as a pharmaceutical. This is why we've been researching ways to modify RNA with compounds that make it more difficult to decompose.

Developing techniques for more efficient synthesis of RNA not readily decomposed in the body. 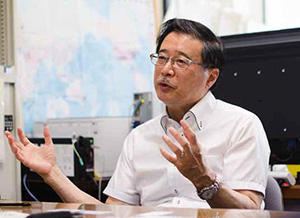 In reality, methods themselves for modifying RNA with chemical compounds have existed for some time. Chemical compounds known as functional molecules can be attached to the terminals of RNA to make the molecule more difficult to decompose in the body, but until now, the technique used has been to produce the functional molecule first, and then to produce the RNA. In the case of simple compounds, these conventional methods work well, but with complex compounds, so much time is needed for synthesis that a bottleneck develops.
And this is why we developed a method in which we synthesize the desired RNA first and then bind a functional molecule to its terminals. Since its comparatively easy to bind a functional molecule to an RNA, we've been able to complete synthesis far more efficiently than in conventional methods. In addition, by changing the functional molecules bound to the terminals, we have made it possible to produce RNA with various functions. Now, by utilizing these synthesis technologies, we are synthesizing RNA that's difficult for enzymes to decompose, or RNA endowed with various functions, like identifying cancer cell receptors, or easy transport to a target site. Natural RNA is decomposed in the body within an hour, but the RNA that we've developed has been shown to persist in the body for several days. We're also learning that extending the life of cancer-related RNA produces a sustained inhibitory effect on cancer over the long term. 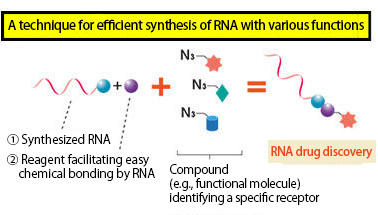 This April, we also entered into a manufacturing and marketing agreement with Kanto Kagaku, a first-tier reagent maker in Japan, for five chemical compounds designed to impart these functions to RNA. Manufacturing and marketing is planned to begin in the near future. In the laboratory, it takes us roughly two to three weeks to synthesize the reagents we need, but a manufacturer could synthesize them much more efficiently, and if they were marketed, any researcher could purchase them and use them easily. And if this were the case, I'm sure it would spur yet more development for RNA drug discovery.

We want to produce drugs for use in clinical settings and save children from incurable diseases.

The general consensus about RNA drug discovery has been that drugs with proven efficacy in trials cannot be used in actual treatment. But in studies of canine melanoma carried out in partnership with Professor Takashi Mori of the Faculty of Applied Biological Sciences, RNA molecules were successful in inhibiting proliferation of cancer cells. These RNA molecules could also be considered for development for humans. With these results, the winds in the pharmaceutical industry have started to shift lately, and RNA drug discovery is starting to attract more attention.
The medical cost of the antibody drugs used in many cases for cancer treatment tends to be high. Whereas RNA molecules have a lower molecular weight than antibodies, and their manufacturing costs are low, and with changes in their sequence, they may be applicable in many different diseases. It seems possible that, in the future, these drugs might be usable for things like infectious disease where RNA plays a part, or rheumatoid arthritis.
We've been able to do research like this particularly because this is Gifu University, where we have a group of leading RNA researchers, like Professor Akao and Professor Mori. We also have a lot of students who are really enthusiastic about research, and over time we've also increased the number of women going on to graduate school. The efforts of these women are also supporting our research. 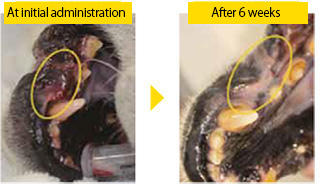 I also studied abroad at the US National Institutes of Health in the past, and my participation in treatment-related research is a foundation of our current research. In my boss's office there, there were clippings pasted from articles about children waiting for development of drugs. I want to develop new therapeutic drugs for the children who are suffering from incurable diseases. This year, I'll turn 61, and what I'd really like to accomplish with the cumulative RNA research that I've pursued with the feelings from that time in my heart is to develop drugs that are used in clinical treatment settings.