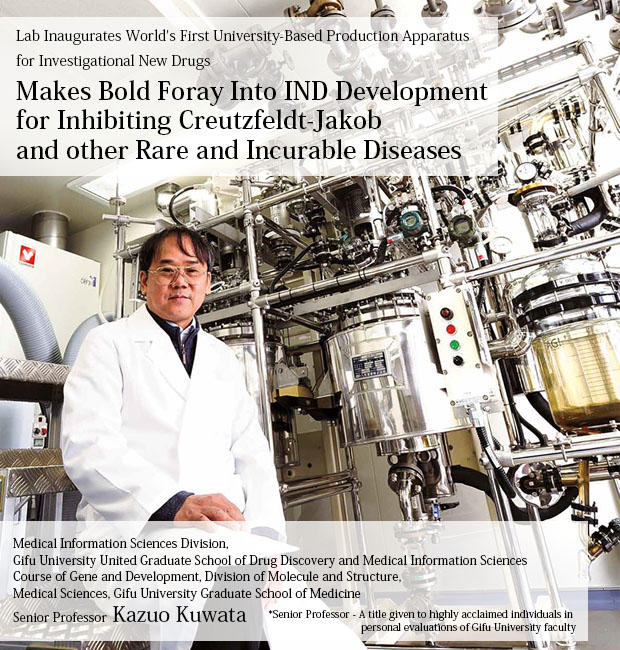 "Inhibiting abnormal transformation of proteins that cause Creutzfeldt-Jakob disease.
Looking ahead to development of investigational new drugs for cancer, diabetes, and other diseases."

Uneasy with neurology, scholar turns toward physics, far from the clinic

I studied at the Medical Course, Gifu University School of Medicine, and after graduating, I had an interest in the mechanisms of the brain and thought I'd become a neurologist. But at the time, Kyushu University Hospital was the only place that had a Department of Neurology in Japan. So in my sixth year in the School of Medicine, I had an opportunity to do diagnosis at Kyushu University, and at that time, methods for treating neurological illness hadn't been established, and once we completed a diagnosis by name, the patients were just discharged without any improvement in their illness. So after seeing the reality of it and feeling very disillusioned in medicine, I decided to go back and restudy quantum mechanics, which had interested me during high school. I didn't go on to clinical medicine and instead decided to study the basics of physics and modern mathematics in the School of Science at Nagoya University.
After that, I studied abroad at the University of California in the US, where I spent my days immersed in calculations using what was called an NMR (nuclear magnetic resonance) apparatus, which allowed atomic-level analysis of molecular structures. And when I started to feel like, "I've gone worlds away from medicine", I joined the UC, and then later on, I was asked by the laboratory of Professor Stanley Ben Prusiner, the Nobel prize winner in Physiology or Medicine, to make some NMR measurements of proteins known as prions located in neurons of the brain. This was the way I began research to analyze the structure of prions at atomic-level resolution. 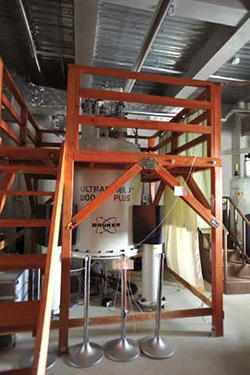 Prions are the cause of onset for rare neurological diseases like Creutzfeldt-Jakob disease and bovine spongiform encephalopathy (BSE) that occur at a rate of one in one million people. Prion diseases are more severe than cancer or AIDS and present early-stage symptoms such as progressive dementia, visual impairment, and dizziness. Then approximately 14 months after onset, death occurs. Currently, no treatments have been established, and quicker development of therapeutic drugs to any extent would be welcome.
When for some reason prions deteriorate from a normal structure to an abnormal structure, they cause powerful toxicity, which kills nerve cells and causes disease. By investigating prion structures with NMR, in the course of my research, I had success in finding out which areas deteriorate and change to abnormal structures, and then in determining the locations where the breakdown first begins. Just at that time, interest started to develop in structural biology and research of three-dimensional protein structures. A lot of papers were coming out which analyzed protein structures with NMR, but in each case, all they did was to analyze the structure. So I decided to use the three-dimensional structures that analysis had revealed to try to develop compounds that would be useful for treatment by preventing prions from lodging in pockets on protein surfaces and transforming proteins to abnormal structures.

About "Creutzfeldt-Jakob disease", a rare and incurable disease 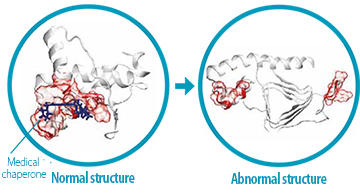 When the structure of a prion protein changes from normal to abnormal,
a portion of the prion separates into two parts, causing Creutzfeldt-Jakob
disease. Based on this mechanism, Senior Professor Kuwata developed
an organic compound termed a "medical chaperone." The medical
chaperone sits in a pocket on the surface of the normal structure and
plays the role of a joint, stabilizing the normal structure and preventing
conversion to an abnormal structure.

The surface of prion proteins has a lot of irregularities. When we did a computer simulation of molecules that would conform to these irregularities based on NMR structural analysis, we discovered molecules that would fit perfectly in areas that would otherwise readily degrade and cause transformation into abnormal structures; these molecules would have a reinforcing function, like a diagonal brace. Then, when we actually synthesized the molecules organically and tried administering them to mice infected with prion diseases, we saw that their life span was extended reliably. So in 2007 we began to develop these items formally as therapeutic drugs, which we called "medical chaperones." Now we're engaged in experiments with administration to monkeys, not just mice, and we'll begin human trials in the near future. We really hope to speed up delivery to patients suffering from incurable diseases. In March 2015, we set up the first university-based, drip infusion drug manufacturing facility capable of manufacturing investigational new drugs, and we're moving along with preparations for the world's first new drug trial specifically for Creutzfeldt-Jakob disease, which is scheduled to begin in March 2017. 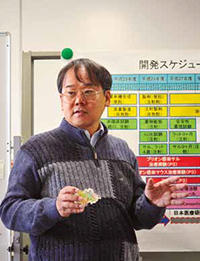 Potential application to therapeutic drugs for cancer, diabetes, and other illnesses, not just neurodegenerative disease

The work I'm doing is development of therapeutic drugs grounded in the concept of "logical drug discovery." For the most part, conventional drug development requires efforts based on experimental principles to prepare an enormous number of compounds and select the best ones among them. But if we use logical drug discovery techniques, we can parse out the best molecules by calculation based on three-dimensional protein structures, and we could efficiently and deliberately design effective compounds that don't exist naturally. 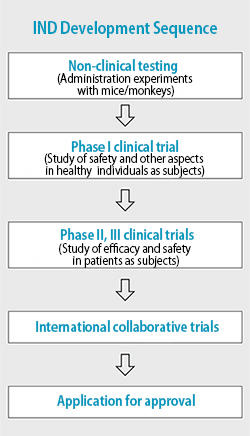 Prion disease is different than diseases like cancer, where even several thousand genes can be involved in complex ways. In prion disease, only a protein known as a prion is involved, and onset occurs through relatively simple mechanisms. Therefore, compared with other diseases, prion disease is easy to control and suitable for the development of therapeutic drugs. Recently, it was finally learned that the protein causing Alzheimer's disease is ultimately mediated by a prion which destroys nerve cells in the brain. Control over destruction by prions has a hidden potential to bring major progress in treatment of Alzheimer's disease, Parkinson's disease, and other neurodegenerative diseases as a whole, not just prion disease.
It also won't be very difficult to expand the application of our research to 10, 100, or 1000 proteins. I'm confident that in the future, the day will come when we're definitely able to control diseases like cancer or Alzheimer's, where an enormous number of proteins are involved.
But what really makes me passionate about this work developing therapeutics for rare and incurable prion diseases is that the pharmaceutical manufacturers will never take it up. They say that it takes 50 billion yen now to develop a single drug. Private industry can't possibly invest this much money for development on behalf of one patient in a million people. Unless universities as public institutions provide the therapeutic drugs for prion diseases, they will never be created. My plan is to continue making every effort possible to develop therapeutic drugs that will help patients suffering from incurable diseases; it's a mission that universities need to fulfil. 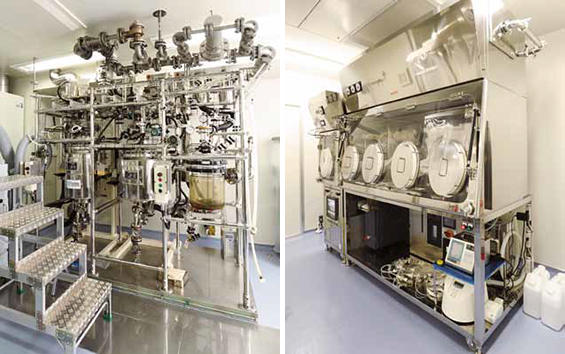 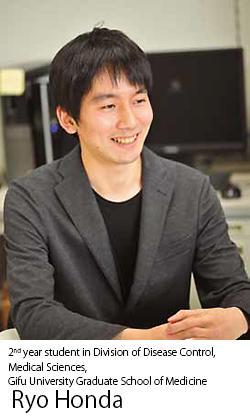 What interests me is using tools like an atomic force microscope for detailed investigation of structures at atomic-scale resolution, and better understanding life phenomena.

I graduated originally from the Medical Course in the Gifu University School of Medicine, and I first encountered Professor Kuwata's laboratory during a laboratory assignment in my 2nd and 3rd years. When I was in high school, I really loved physics and math, but in the Medical Course, I didn't have many opportunities to think about things in terms of physical concepts, so when it occurred to me to try to understand life in terms of molecular motion, I decided to continue research in Professor Kuwata's lab. 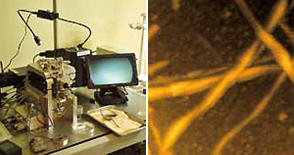 I first began researching therapeutic drugs for rheumatoid arthritis, but then, with some input from Professor Kuwata, I really began research into prion diseases. Now I'm using tools like an atomic force microscope and NMR to investigate the atomic structure of prions, and my findings are steadily accumulating.

What interests me is the extent to which the mechanisms of life can be explained by things like molecular motion and structural changes. It's fascinating that prion research slowly continues to explain the systems of life phenomena. 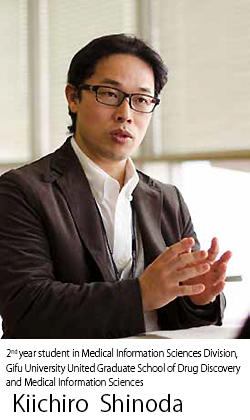 I hope that research into treatment for Alzheimer's disease will give me a detailed understanding of the fundamental causes of neurodegenerative disease.

Until last year, I was studying in the Graduate School of Medicine at Shiga University of Medical Science, researching ways to bring the many long-term inpatients in the Department of Psychiatry back into society. But while I was serving at the departmental hospital as a working nurse, I developed an interest in the fundamental causes of Alzheimer's and other neurodegenerative diseases, and it was suggested to me that perhaps I should try research with Professor Kuwata, so I decided to study at Gifu University. 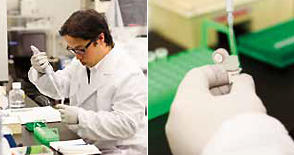 Prions have a close connection with the onset of neurodegenerative disease. So I thought it would good if the medical chaperone developed by Professor Kuwata could be applied to Alzheimer's disease, and I continued this research by first breeding Alzheimer's mice and testing for differences from normal mice. In the future, I hope that a deep understanding of neurodegenerative disease will help me to serve as a university instructor capable of communicating the happiness to be found in psychiatric care.

Q. What is a protein, really?

A. A polymer compound comprising a polypeptide of approximately 20 different amino acids joined in a chain. The main constituent making up the majority of the human body, includes the muscles and organs, skin, hair, and blood. The adult body contains roughly 10 kg of proteins, and approximately 100,000 different proteins carry out its various functions.

Q. What are prions all about?

Q. What is neurodegenerative disease?

A. A disease marked by gradual death of specific nerve cell groups among nerve cells in the brain and spinal cord which govern cognitive, motor, and other functions. The major such diseases include Parkinson's disease, Alzheimer's disease, and amyotrophic lateral sclerosis (ALS), which tend to occur readily in elderly individuals, though their causes are still not understood in detail.