Work sheds light on the mechanisms of hair-graying and white-spotting. 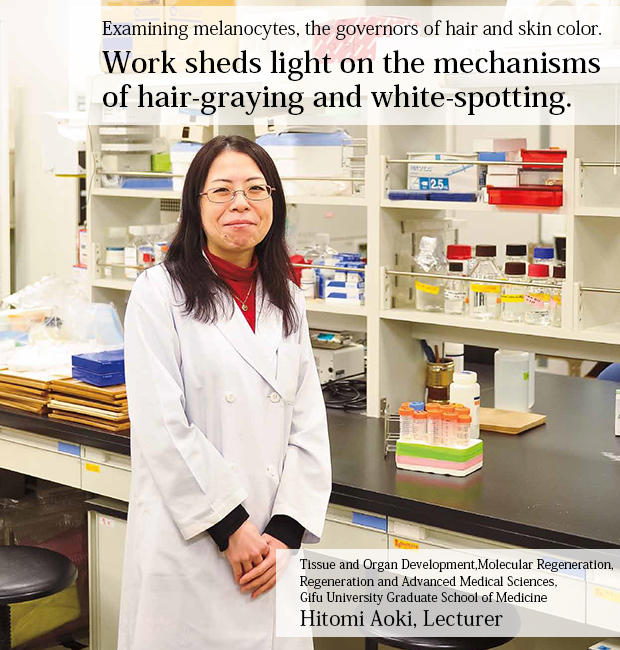 Research into technologies for manipulation of hair and skin color at will,with minimal adverse effects on the body

When I began studying in the Gifu University Faculty of Agriculture, I was very interested in large animals like cows and pigs, and I studied fields like hereditary modification, genetics and breeding. After that, I joined a research laboratory in "developmental biology" to study how a fertilized egg develops and differentiates into tissues and organs. At the time, "human embryonic stem cells", that is, stem cells able to differentiate into any type of tissue or organ, were being developed and were drawing attention worldwide. With my background in developmental biology research, the possibilities that embryonic stem cells held were very compelling to me, and I decided to transfer between faculties because I wanted to study with Professor Takahiro Kunisada, in the Graduate School of Medicine, who was doing advanced research in this area.

Since affiliating myself with Professor Takahiro Kunisada's laboratory, I have been involved consistently with research on "melanocytes", which determine the color of skin and hair through their production of the pigment melanin. From the start, I was intrigued by the question, "Why don't black and white Holsteins have striped or dotted patterns like those of other animals?" Later, I learned that the black and white patterns of the cows are determined by the location of melanocytes, and I came to develop a strong interest in melanocytes. What's more, melanocytes themselves have the characteristic of turning black along with colorless, undifferentiated stem cells differentiate, and this was also an extremely instructive research topic for understanding stem cell mechanisms. So in this light, I wanted to elaborate the phenomena of hair graying and the appearance of white spots and pigmented spots on skin through the mechanisms for development, maintenance, and disappearance of melanocytes, so I continue in research.

The main reason why the hair of humans turns gray is that melanocytes die off, and melanin can no longer be produced. But to understand why there isn't anyone whose hair turns entirely gray suddenly-- even if some hairs turn gray, next to them there is black hair which has melanocytes. Originally, melanocytes are independently migrating cells like amoeba and attach to hair or skin, so if we could get melanocytes to migrate from black hairs to gray hairs, it would be possible to get black hairs back. In other words, if we were skilled in controlling melanocytes, we might be able to manipulate the color of skin or hair at will.

Even if melanocytes disappear and hair turns gray, that itself does no harm to life. But the world is awash in cosmetics for women who yearn for lighter skin, and there are so many people who want to dye their gray hair. When I think of the size of the current beauty-related market, there would be an enormous impact to control melanocytes. And as we see from all of the interest several years ago around the problem of unintended white spots caused by "Rhododenol", the active ingredient in skin-lightening cosmetics, there are a lot of people distressed over wrinkles and white spots, to say nothing of the extreme discrimination over skin and hair color in different countries. So I feel like research on melanocytes also has an avenue into major societal contributions. 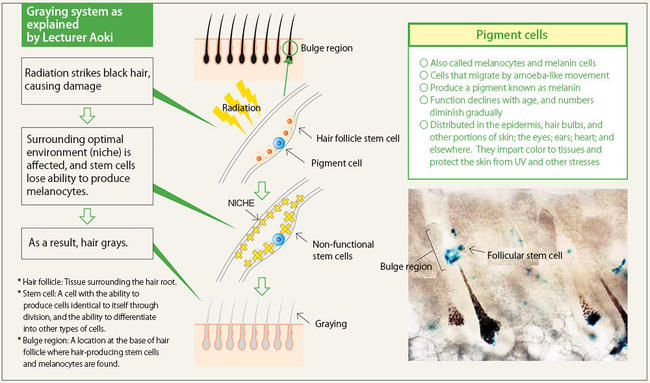 A focus on protecting the "environment" supporting melanocyte stem cells

To research the mechanisms that turn hair gray, I gave mice gray hair by damaging their melanocyte stem cells with radiation and investigated this phenomenon in experiments. The results showed some surprising facts. The accepted explanation up to that point was that exposure to radiation eliminates the melanocyte-producing function of stem cells themselves, which turns hair gray. But more detailed investigation showed that melanocyte stem cells did not lose their function directly; that the environment known as a "niche", which protects stem cells, was highly sensitive to radiation; and that through damage to this environment, stem cells lost the ability to produce melanocytes. 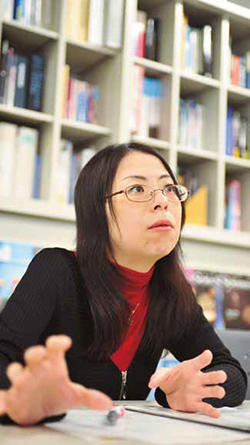 For the past three years, I have been conducting this melanocyte research jointly with the hair care product manufacturer and marketer Hoyu, and already, we're able to prevent graying to some extent at the level of animal experiments. Later, once we're able to expect a more reliable effect and have developed methods to achieve finer control over color shading, we'd like to be able to offer this effect in an easily ingested form, like a supplement.

I think that regenerative medicine is a field of great interest, but when you're working with embryonic stem cells (ESCs) or induced pluripotent stem cells (iPSCs), they have the same characteristics as fertilized eggs, in that there's always a risk of causing genetic damage in the process of cell replication, which will ultimately become cancer. I myself have used ESCs and iPSCs previously in retinal regeneration, but it seems to me that many technical problems remain. Whereas, the techniques for controlling the niche that I'm currently investigating are methods for promoting the health of stem cells contained originally in the body, or for suppressing these cells, so there will be a chance to bring virtually no risk like that of malignant transformation.

Compared with research on embryonic stem cells or induced pluripotent stem cells, my research is also far lower budget, and much closer to practical implementation in my opinion. So in the future too, I hope to continue partnering productively with firms carrying out joint research, in hopes of developing items that make melanocytes widely useful for society. 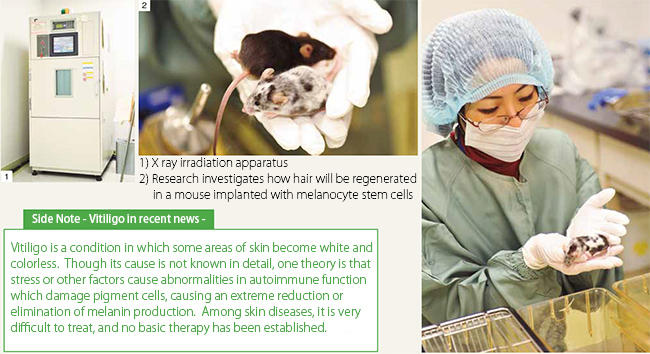 Delves into neural crest cell
research and other areas at the
origins of vertebrate animals. 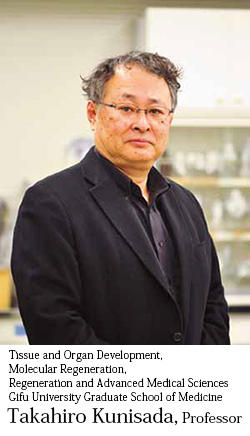 In my laboratory, we publish on the research topic of "neural crest cells" which have played a definitive and crucial role in the evolution of vertebrates, and we carry out experiments to replicate in vitro just how neural crest cells developed. Cells in the border of skin and neural tube (future spinal cord) produce neural crest cells, and by elaborating their true nature, we are trying to clarify the particular characteristics of vertebrates not found in other living organisms. We are also in the midst of a project to collect pulp cells from wisdom teeth, which have many neural crest-derived cells, for wide use in regenerative medicine. We are working to create a system using pulp cells collected from roughly 1000 people to treat patients with spinal cord injuries.

The melanocytes that Dr. Aoki is researching are also produced by neural crest cells. Aside from determining skin and hair color, melanocytes are highly crucial cells with a variety of roles such as protection of skin from ultraviolet rays. Dr. Aoki has already made a number of important discoveries, and her research results have been highly acclaimed worldwide, for example, through her periodic publications in highly-ranked specialized journals.

Where Dr. Aoki particularly excels is in her mastery of a great many experimental technologies and her own ability to apply virtually all of the technologies necessary for progress in life sciences research. And above all, she has a passion for research and spares no effort. Her research has elaborated new functions of genes that no one had expected before, and in other respects too, she is the embodiment of an outstanding young, female researcher capable of world class activity even as she works here at Gifu University. 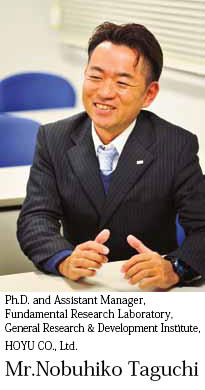 Already a current applicant for several patents jointly with Gifu University. The appeal is the well-honed, cutting edge research environment.

I met Dr. Aoki at a melanocyte conference held in Nagahama, Shiga, in 2012, and our joint research has continued over the last three years. After learning about the research that Dr. Aoki had done to investigate mouse melanocytes grayed by applied radiation, I requested that we pursue joint research that could establish technology for an anti-graying agent that I had continued to investigate after I had also joined my firm. To date, we have applied jointly for several patents, such as one to protect the niche that supports melanocyte stem cells in order to prevent graying, and we expect registration in 3 to 4 years at soonest. Gifu University holds its ties with industry in very important regard, which makes joint research very easy to pursue. Its well-honed, cutting edge research environment in Japan for melanocytes is also highly appealing. 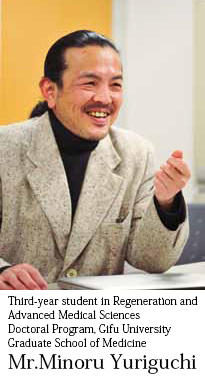 From beautician, with a firm resolve into the world of genetic engineering. Presenting at foreign conferences on systems for regrowing black hair.

In my teens, I became a beautician, and when I was 38, I enrolled in the Gifu University Faculty of Engineering. I had to clear up this question that had followed me around in my work-- "Why do people get gray hair?" So I began studying genetic engineering in the Department of Chemistry and Biomolecular Science. After graduating from my school, I devoted myself to work for just one year, and then I enrolled in the Graduate School of Medicine, where Professor Kunisada works, and I began research six years ago. The accepted explanation up to now has been that only gray hair will appear if hair regrows at a site where someone has been injured. But in the beautician setting, I saw that sometimes black hair would regrow, and after trying various techniques, I showed that black hair can grow under certain conditions. Then two years ago, I presented my research results at a conference in Singapore and got a tremendous response.