My goal is to clarify the close connections of humans to animals and the natural world through research into hunting cultures. 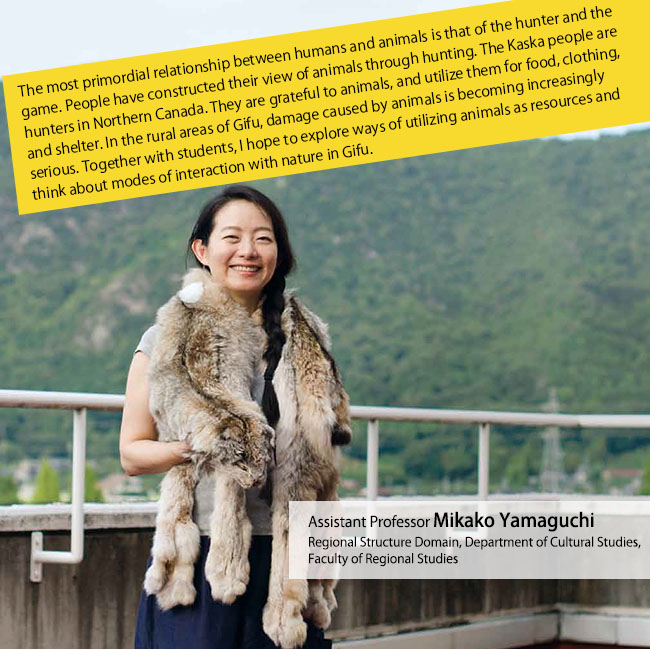 The hunter-gatherer Kaskas and animals are connected physically and spiritually. 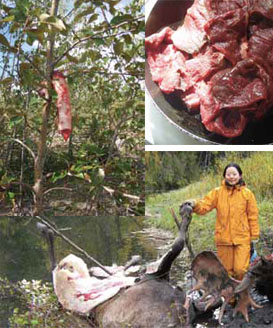 The hunted moose is butchered on the spot.
A single knife is used to skin the animal, and the edible
parts are cut away. The wind pipe hanging from the branch
is a sign of gratitude to the moose.

My specialty is cultural anthropology, and in particular I do research in ecological anthropology, a discipline that seeks to elucidate the relationship between nature and humans. I originally wanted to research animals, which led me to major in biology as a student. I studied the biology of Japanese hare, but biology is a discipline that seeks to discover universal knowledge. The aspects of animal behavior that cannot be understood by converting them to numbers and quantifying them are cut away. However, as I was doing field surveys I began to realize that humans are involved in the lives of hare. For farmers, for example, hare are bad creatures that eat crops, but for hunters they are important game. I wanted to know more about those kinds of aspects. My desire to shed light on the relationships between humans and animals became stronger, and I switched to cultural anthropology from my Master's program.

Based on my belief that the primordial relationship between humans and animals is one of the "hunter and the game," for my field research I chose North America, where hunting and gathering traditions still remain. That said, information is not available in Japan, so I gathered at Canadian universities. I located a hunter-gatherer people that make active use of wild animals, and I spent about a year getting permission to do surveys from the Canadian government and the autonomous aboriginal government. And since nine years ago I have been travelling to and doing fieldwork in a village of the indigenous Kaska people, who live in inland areas in Northern Canada.

The elder carries a beaver that has been caught in a
trap.

At the village I became an apprentice to an elder, and sometimes spent more than a month at a time traveling through forests learning how to hunt, butcher, utilize hunted animals, make tools, etc. and studying the relationship of the Kaskas with animals. The elder would sometimes say that the reason many moose, the most valuable game, appear in "a certain place" is that there is much grass that the moose eat that grows there, and sometimes that a shaman uttered a spell there a long time ago. For the Kaskas, there is no barrier between ecological knowledge and supernatural knowledge: both are valuable. Underlying this view is the reality that if they could not kill game, they would starve, and so there is the belief that they are physically and spiritually tied to the animals. Almost no part of the animal killed goes to waste―the meat, hide, and bones are used―the wind pipe alone, however, is hung from a tree branch. 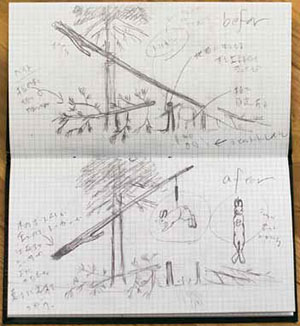 How to set a hare trap, as written in a field notebook.
The trap is designed so that the hare is yanked up when
caught in it so that it is not snatched by foxes or
other animals.

It is believed that the soul remains in the wind pipe , and when wind blows through it the body is regenerated. They believe that if the animal is thanked and the wind pipe is left in the forest, the animal will let itself be hunted again. They have developed these beliefs in the context of their relationship with animals.

The Kaska people speak of themselves using the phrase "part of the land." When they butcher animals in hunting grounds, they see in their stomachs the tree leaves that the animals like. Trees grow on the vast land of the forests as they absorb water from it. Because of this, they are instantly capable of understanding that the trees of the forest, the land, and water make up the bodies of the animals.

Through hunting experiences in the seminar, I want to think about modes of interacting with nature and animals in the community. 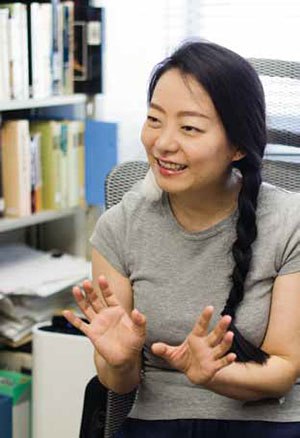 In Japan, the ties between people and animals are so hard to see that people don't seem to realize that eating meat means killing an animal. In my seminar, I plan to implement a practical component consisting of hunting, based in Ibigawa town. In rural areas such as Ibigawa town, the problem of damage caused by animals has lead people to have increasingly negative feelings towards them. Through hunting, I want students not merely to kill animals, but to think about how the game can best be used as resources and about ways of interacting with nature in the community. As a person who has studied the hunting culture of the Kaskas, I think this is a field in which I can put what I know to good use. 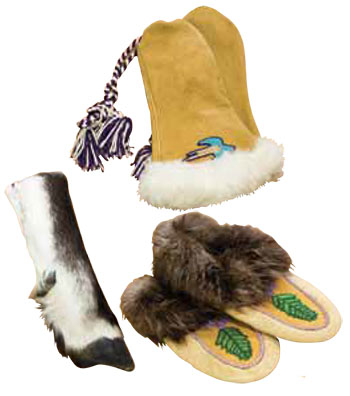 Mittens made from moose leather and hare fur,
slippers made from beaver fur, and a knife
case fashioned out of a Dall sheep's foot.