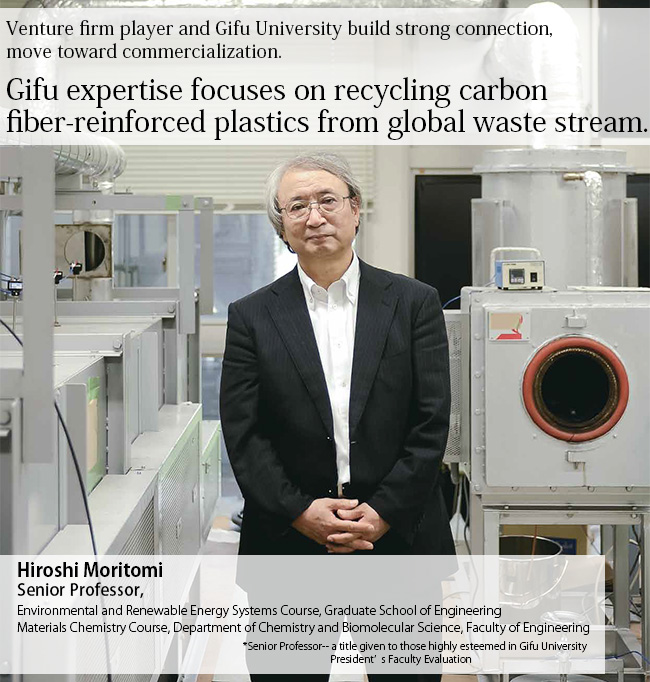 Today, "carbon fiber-reinforced plastics" (CFRP), which is lighter and sturdier than steel, are the focus of attention as a material input for aircraft and automobiles. CFRP are a composite material that blends together resins and carbon fibers made from petroleum and coal. Future demand for CFRP is forecast to increase rapidly, and 5 years from now, in 2020, projections are that various industries will use 150,000 tons, or twice or more the current amount, in place of materials such as steel and aluminum.
But the biggest bottleneck to the promotion of CFRP now is "price." In automotive manufacturing, an automobile requires approximately ¥1,000 in materials per kilogram, while the market price for CFRP is approximately ¥3,000 per kilogram at lowest. Additionally, in actual manufacturing using CFRP, the portion of the CFRP needed is cut from sheets, and the remaining 40 to 50% is discarded, resulting in increasing cost by the same margin and creating a liability for disposal of massive amounts of waste.

Another great advantage of CFRP is its flameproof. At the same time, however, incineration of the CFRP waste entails enormous fuel costs, and this is why most of the waste is actually disposed by landfilling. So when I considered how I might change this state of affairs, I partnered with President Hidehito Itazu of Carbon Fiber Recycle Industry Co., Ltd. (CFRI) , in Minokamo City, and pursued research that led to the technology recovering carbon fiber from the wasted CFRP that makes use of traditional "ibushi" Japanese roof tile firing technology. Substantial results were also made possible through a project contracted by the New Energy and Industrial Technology Development Organization (NEDO) and subsidized project assistance.

Use of combustible components in the waste allows reuse at ultra-low cost.

Ibushi tile firing technology is a Japanese roof tile manufacturing process in which a 10 µm thin carbon coating is baked onto clay, and the process is noteworthy for its tight sealing, which excludes air in a pylolysis process. Our recycling process uses this distinctive tile firing technology and applies heat to CFRP over a long duration to extract the carbon fibers. It means that recycled carbon fibers are recovered using a combination of two furnaces, a "carbonization furnace", which removes the bulk of resins from the CFRP by pyrolizing , and a "firing furnace", which fires the residual carbon with an air supply for further removal of remaining resin components. A major distinctive feature of this technology is its reuse of combustible tar and gases produced during resin extraction by the carbonization furnace; these components are used as a fuel during heating by the carbonization furnace and the firing furnace.
*µm: Unit of length equal to 0.001 mm 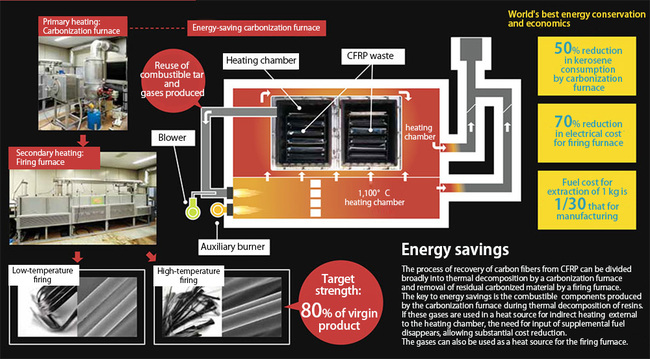 In essence, a small amount of kerosene is supplied to the carbonization furnace during primary heating, and CFRP wastes are heated to 400-500°C. At this point, the resins present are thermally decomposed, and the carbon fibers and resins separate, which also generates combustible tar and gases. If these components are used as a fuel, the materials can be heated using only products from the waste material itself. And if the components produced in substantial quantity are also used in the firing furnace, treatment can be performed without input of any external fuel at all, achieving major energy savings and cost reduction.

The process of recovery of carbon fibers from CFRP can be divided broadly into thermal decomposition by a carbonization furnace and removal of residual carbonized material by a firing furnace. The key to energy savings is the combustible components produced by the carbonization furnace during thermal decomposition of resins. If these gases are used in a heat source for indirect heating external to the heating chamber, the need for input of supplemental fuel disappears, allowing substantial cost reduction. The gases can also be used as a heat source for the firing furnace.
Though CFRP recycling technologies have been researched worldwide, to date most of them have only reached an experimental level. And though some of these technologies allow recovery of extremely clean fibers, they require input of substantial external energy. The revolutionary feature of our technology is its focus on commercialization and the way it allows recovery of large quantities of carbon fibers from used CFRP at a negligible cost for fuel.
At the outset, the recycling technology conceived by President Itazu was one achieved by reliance on the experience and insight of the CFRI staff. Carbon fibers were recovered during a process of fine-tuning of temperature and associated parameters. Though the instant I first saw the apparatus and thought, "This is magnificent," I felt in need of data accumulation from various analyses for standardization and/or optimization rather than worker skill, and for maturation of the initiative as a whole. Thus began collaborative research. 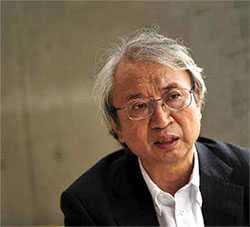 The role of Gifu University has been to pursue analysis from an objective viewpoint, and to understand the processing parameters needed to produce a recycled product with a quality approaching that of the original CFRP. A laboratory scale of the CFRI apparatus was installed at the University to provide an environment allowing rapid production and evaluation of samples and processes without the need to operate a large scale apparatus. Data were then collected from a variety of analyses, including quality evaluations using an X-ray apparatus for investigating structural changes, component analysis of the tar and gases produced by the resins involved, and strength comparisons of the recovered carbon fibers and recycled CFRP produced from them. As the results gradually answered the question of what parameters were needed to produce high-quality recycled CFRP at lower cost, the inception of a full-scale project grew ever closer.

What we sought was to create a recycled product at a cost one-tenth that of typical carbon fiber prices. If this recycled product could be used, for example, as a substitute for the inner six layers of a CFRP panel with an eight-layer structure, a major cost reduction for the product could be achieved. And if this were possible, carbon fibers being landfilled throughout the world could be reused, which would provide a great societal contribution from a recycling standpoint as well.
However, problems in the path to commercialization remain. The amount of used CFRP recovered is low and unstable, and it is also difficult to find companies to use recycled carbon fibers or CFRP. At present, standardization of recycled carbon fibers continues, and efforts are also beginning to create a chain of CFRP waste material procurement, carbon fiber recovery, and recycled carbon fiber manufacturing and processing, and likewise, to form a consortium of companies partnering to set up shipping centers and processing facilities.
Gifu Prefecture is a location that draws together four technologies essential to CFRP recycling technology: pottery, fibers, cutlery, and Japanese paper. Through best use of this "home advantage", we hope to create some type of business network by 2017, small though it may be. Beyond that, we hope that use in the automobile industry will begin by approximately 2020. Our hope is that the "black diamonds" that we have created could bring a brighter day to the world. 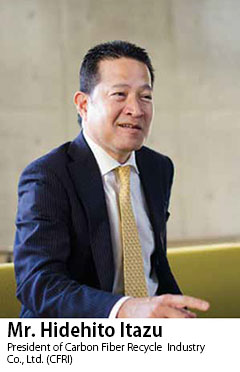 To us, Gifu University is the best possible partner.

I come from a family runing a business as a long-established producer which has developed and manufactured traditional Japanese roof tile firing equipment. And personally, before establishing this company, I was involved in a company associated with a fiber manufacturer and developed equipment for recovery of rare metals through incineration of resin-based electronic circuit boards. The technology discussed here embodies a great deal of know-how derived from cost-reducing measures for ibushi roof tile firing developed over many years, and I thought confidently that there was no recovery technology to compare for energy saving and cost reduction.

But astradesman, even though we had succeeded in carbon fiber recovery through experience and insight, we did not understand the detailed reasons involved. And it was Professor Moritomi to whom we turned for an informed, academic explanation and a theory for the recovery process. This was not simply research alone; from the outset, his efforts for us incorporated a perspective leading to future commercialization, to the point where he is now a "strategic advisor" to the CFRP recycling project. To us as a small-to medium-sized company, the partnership with Gifu University is an extremely important one. This is because a technology developed in a growing partnership with a national research organization also has a major impact on the confidence of business partners, particularly when going abroad. In the future, we hope to continue progress toward commercialization, hand-in-hand with the Gifu University, in this location that is home to a collection of superb manufacturing technologies. 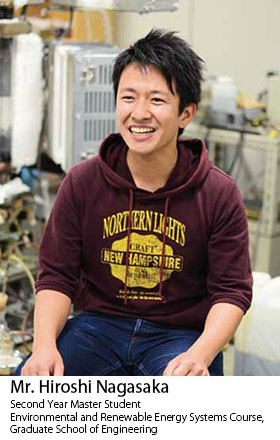 I am responsible for quality evaluation of carbon fibers and gas analysis at this electric furnace for combined carbonization and firing. In the future, I hope to apply the results of research to automobile development.

What captured my interest in CFRP recycling technology was that, unlike basic research, it's close to practicality, so I felt that this was a challenging research field. Currently, our laboratory has approximately 15 students, both fourth-year students and graduate students, and we perform analytical work related to CFRP recycling technology. I am primarily responsible for tasks such as quality evaluation of recycled carbon fibers using X-rays and a tensile tester, and for component analysis of tars and gases produced by the resins involved. 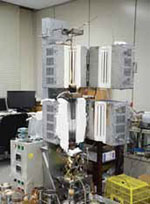 Electric furnace at Gifu Univer-
sity. Processing identical to that
of a carbon furnace and firing
furnace allows acquisition of
detailed data.

I use an electric furnace capable of performing both the carbonization and firing processes to investigate questions such as what components are included in the gases and tar isolated from CFRP, and the relative quality of the carbon fibers recovered. I also identify optimal values when the large apparatus is operated.
The appeal of our laboratory is that I'm able to offer my own opinions and to work on the research independently, based on my own thinking. When I was a fourth-year student, I often waited for instructions, but now I'm able to act independently, and the research is also far more enjoyable.
In recruiting, I received a tentative offer from an automobile body maker. But even after I join the company, I hope that I'm able to make full use of the results of all the research I've done to date on CFRP recycling.

From the recycled CFRP I've produced on my own, I discovered that lower firing temperatures produce greater fiber strength. I would also like to analyze the relationship between fiber length and strength.

I'm conducting experiments where I take recycled carbon fibers provided by CFRI, cut them into 5 mm lengths, make them into sheets essentially the way that "Mino" traditional Japanese paper is made, and then use a hot press to produce recycled CFRP. We cut the finished product into widths of approximately 2 cm and use a tensile tester to measure their strength. The results from this strength measurement have shown us that the lower the temperature during firing, the more the strength of the recycled CFRP is increased.

Analyzing differences in strength
between original carbon fibers
and recycled product with a
tensile tester to measure strength.
Currently, we are using carbon fibers cut into 5 mm lengths in all cases, but we would also like to do a detailed analysis of the kinds of differences that result when the length is varied, for example to 2 mm or 8 mm.
I was originally part of the Department of Chemistry in the Faculty of Engineering, where we did experiments such as separating metals by blending with reagents, but personally, I found much of this research to be somewhat dry. In comparison, carbon fibers are a very current issue, and they're also used in aircraft and automobiles, so I feel that this is an interesting field with a great future. I'm also able to actually produce recycled CFRP with my own hands, which gives me a sense of potentially helping society in the near future. This makes me very happy.