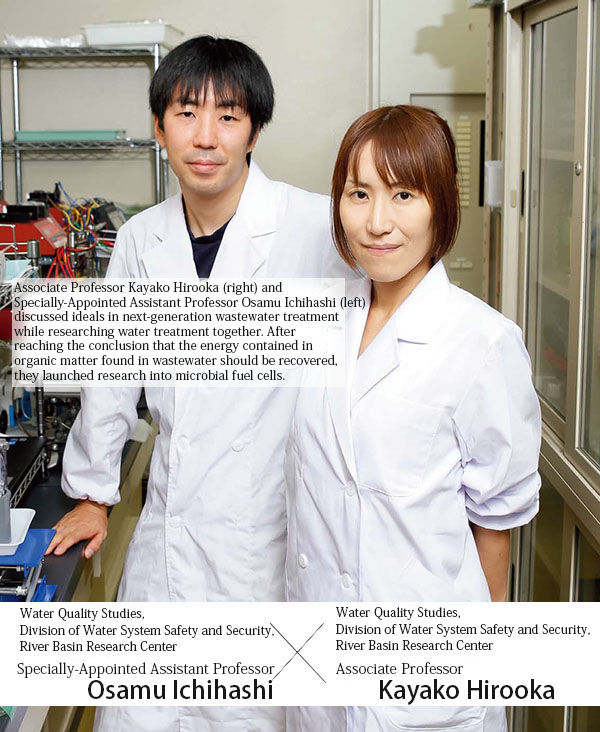 Hirooka In the village in Mie Prefecture where I was born and raised, there were no sewerage treatment facilities. When I saw sewage being discharged without treatment, I was deeply worried about the situation. So, I took a keen interest in wastewater treatment. After graduating from high school, I studied urban engineering at the University of Tokyo. Afterwards, I worked at the Graduate School of Agricultural Science, Tohoku University, and then I assumed a post at Gifu University in 2009.
Ichihashi I also came to know the problems such as environmental pollution and acid rain in my childhood, and have since been interested in environmental problems. However, it was when selecting a laboratory after entering the University of Tokyo that I decided to pursue studies in the field of water treatment. I belonged to the same laboratory as Associate Professor Hirooka and we studied the basics of sewerage engineering together.
Hirooka I have been continuing research into water treatment, and as one of the methods, I saw great potential in "microbial fuel cells," which I started to research in 2008. Fuel cells generate electricity by consuming fuels that are supplied to anode and oxygen supplied to cathode. In fuel cell system, a catalyst assists reactions that occur on the electrodes, and the microorganisms play the role of such a catalyst in microbial fuel cells.
Ichihashi Microbial fuel cells have a structure of two electrodes placed in a water tank and connected to an external circuit. Water containing organic matter (wastewater) is supplied to the water tank, and as the microorganisms decompose the organic matter, they make electrons flow in the anode electrode, and electricity is generated.
Hirooka In fact, the phenomenon of microorganisms generating electricity was discovered by researchers more than 100 years ago. At that time, since it generated too little electric energy, the system was considered useless and did not attract attention. However, it became clear in the 1990s that electric energy exponentially increases if specific substances are used. Moreover, since the structure of fuel cells themselves has been remarkably improved, the field of microbial fuel cells has come under the spotlight. Over the last 15 years, power generation has increased exponentially by several thousands to tens of thousands of times, and further research into the practical uses of microbial fuel cells is expected. 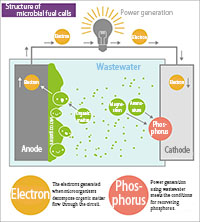 The world's first recovery of phosphorus came accidental during experiments.

Ichihashi We have focused our attention on the decomposition of organic matter by microorganisms, a process that occurs when microbial fuel cells generate electric power, from the perspective of water treatment. The large quantity of organic matter contained in wastewater is one of the causes of pollution in rivers and lakes. Therefore, we considered that, if we can generate electricity by using organic matter as fuels, the system can both recover energy and efficiently treat wastewater.
Hirooka We discovered this time that phosphorus can be recovered from microbial fuel cells, but we came upon this by chance in our research. One day when we were conducting experiments as usual, we noticed there were deposits on the electrode. When we observed it carefully, we found a brilliantly shining matter that looked like crystals and clearly differed from microorganisms in the wastewater. After conducting detailed analyses, we identified the deposits as highly-concentrated phosphorus. The phenomenon that phosphorus attaches to the electrodes of microbial fuel cells must have occurred in the past. However, we gather that, since other researchers did not necessarily specialize in wastewater treatment, they were not interested in the possibility of recovering phosphorus. Therefore, we guess, we were the first in the world to discover this.
Ichihashi Other than that, it was significant that we used "actual wastewater." Artificial wastewater is normally used in experiments of microbial fuel cells. Artificial wastewater is made by artificially adjusting the amount of components according to the need of experiments. We used not such artificial wastewater but actual wastewater from pig farming when conducting experiments, and this wastewater met the conditions for facilitating the recovery of phosphorus. Namely, in addition to containing highly-concentrated phosphorus, other elements such as ammonium and magnesium, which are required for such recovery, were also moderately contained in the wastewater. Through this series of coincidences, we discovered this this time.
Hirooka Phosphorus is an important substance indispensable to human activity as it is used extensively as agricultural fertilizer. Japan is almost totally dependent on imports for its phosphorus supply. Since phosphorus is considered an exhaustible resource around the world, consuming countries may fiercely compete for the remaining supplies in the near future. In fact, phosphorus is such a valuable resource that Japan's annual imports of phosphorus total 800,000 tons. In comparison, it is said that the disposal of phosphorus as a part of sewage and livestock excrements totals 300,000 tons. In addition, wastewater treatment requires an enormous amount of energy, but it is estimated that wastewater has a potential energy several times that required for such treatment. Therefore, through our research, we are pursuing the creation of a mechanism that allows both efficient wastewater treatment and recycling of phosphorus in our own country. 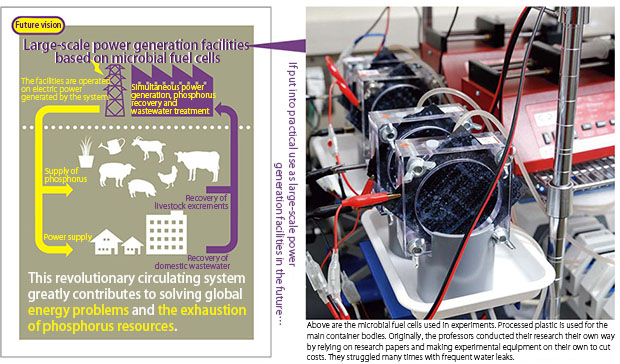 The hurdles for practical use are the "creation of large-scale systems" and "costs." 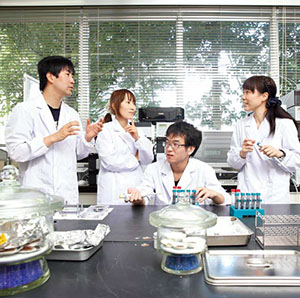 Hirooka At present, the size of mainstream microbial fuel cells is small as used in laboratories, and even the largest size in the world is only about 1,000 liters, which is even smaller than a typical household septic tank. Moreover, the costs of creating a system are a big issue. There is still be a long way to go before microbial fuel cells are put into practical use as large-scale power generation facilities by overcoming the two large barriers of "creating large-scale systems" and "costs." Believing that it will be achieved someday, we want to further continue our research into a method that can efficiently recover phosphorus.
Ichihashi There are limits to what individual researchers can do to put microbial fuel cells into practical use. However, if researchers around the world bring their passion into this field, the technological level will steadily rise step by step. Moreover, if we look at just the removal of organic matter, microbial fuel cells make it possible with less energy than conventional methods. Although it will take a long time to create large-scale power generation systems, we expect energy-saving water treatment based on microbial fuel cells can be put into practical use in 10 to 20 years. 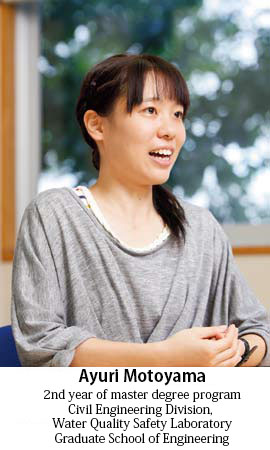 I am attracted to research that promotes the effective use of the valuable resources contained in wastewater.

I have been interested in environmental problems since my childhood. When I was an undergraduate, I studied all kinds of related fields including air, soil, water environments, and waste at another university. After researching groundwater contamination in Sri Lanka, I developed a keen interest in water environments. In Sri Lanka, I studied water-borne health hazards that had affected residents in some areas. I clearly realized how valuable and important water is, as we use it every day but take it for granted in Japan.
In the current research into microbial fuel cells, I am studying the changes in the amount of phosphorus recovery and power generation by changing the conditions of wastewater fuels and the operating conditions of the microbial fuel cells. Wastewater contains many valuable resources. Since microbial fuel cells are an extremely promising technology from the perspective of the effective use of resources, I feel a strong attraction to this field of research. 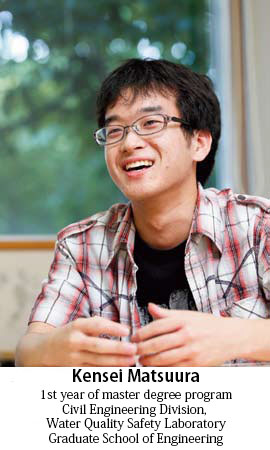 I want to contribute to putting microbial fuel cells into practical use by using lower-priced materials for the catalyst.

Until I started graduation work during my senior year as an undergraduate, I had mainly studied environmental engineering and soil mechanics. For the graduation work, I engaged in slightly different fields and began researching microbial fuel cells almost from scratch. It was an invitation from Associate Professor Hirooka that prompted me to select this research field. I found it pure and interesting that electricity can be procured from wastewater.
I am currently conducting research into new materials that could be used as a catalyst. As a catalyst for microbial fuel cells, platinum is conventionally used. However, I am using zirconia as an alternative for conducting experiments. The cost for procuring zirconia is about ten-thousandth that of platinum. In proportion to the price, the performance of zirconia as a catalyst is lower than platinum. However, cost reduction is an essential requirement for the practical use of microbial fuel cells. Therefore, by continuing trial and error, I want to help put microbial fuel cells into practical use in any way possible. 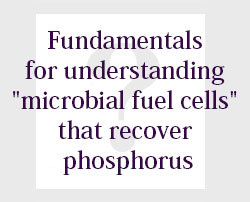 Q. What kind of substance is phosphorus?

A.It is a valuable resource that is indispensable to life.

Phosphorus is an important element that is essential for all creatures as it exists in DNA and RNA, which are central to the genetic information in living organisms, and a major component of bones. Moreover, phosphate is a major component of chemical fertilizer alongside nitrogen and potassium, and phosphate is also used in a wide range of applications including metal surface treatment, industrial catalysts, food additives, agricultural chemicals, and insecticides. Although phosphorus is a valuable resource that is irreplaceable as a fertilizer component, the amount of recoverable phosphate rock resources in the whole world totals only about 15 billion tons. In recent years, the price on international markets has sharply risen. Since Japan is almost entirely dependent on imports for phosphate rock supply, how the country can stably secure phosphorus is a serious issue.

Q. What are microbial fuel cells?

A.The two differ in that one requires oxygen for activities and the other does not.

An "aerobic organism" is a microorganism that conducts activities by aerobic respiration, while an "anaerobic organism" is a microorganism that can conduct activities without requiring oxygen. To treat organic matter-containing wastewater discharged from food factories, livestock farms, and households, an activated sludge process that uses aerobic microorganisms is mainly employed. This method requires an enormous amount of energy to supply oxygen and treat the multiplied microorganisms. On the contrary, in microbial fuel cells, anaerobic microorganisms are used to decompose organic matter. Therefore, the supply of oxygen is not required and the microorganisms multiply little, which makes it possible to greatly reduce the amount of energy required for water treatment.