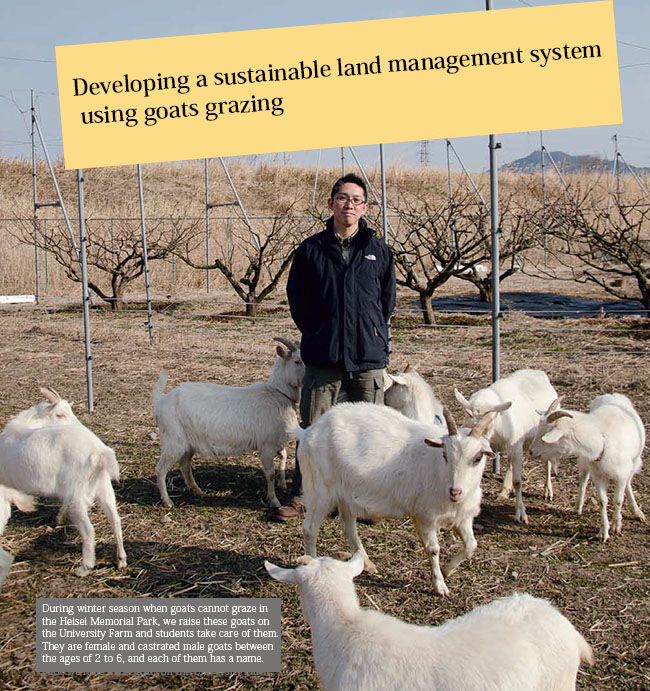 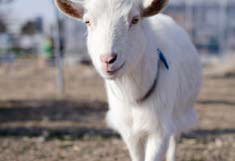 As the Japanese population continues to shrink in the future, the amount of abandoned cultivated land will increase steadily. As land becomes overgrown with plants due to lack of people to manage it, it tends to suffer damages by wildlife and attract illegal dumping. I am conducting a research experiment on land management using goats, one of the easiest-to-handle domestic herbivores, in an effort to develop a method for keeping land from becoming overgrown with weeds through sustainable management that does not require human labor. 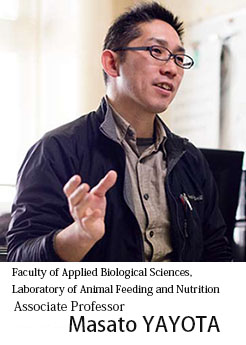 In Japan, the viability of the livestock industry depends on availability of low-cost imported feed. Yet Japan is blessed with land on which plants thrive due to its warm temperatures and ample rainfall. Recognizing this fact, I would like to develop a livestock production system that uses this rich resource as feed. Taking this wish as a starting point, I am conducting research into the effective use of local plant resources and land management based on grazing domestic herbivores.
The most important consideration in raising livestock is the amount of feed the animals need in a day. For example, how much cows eat and how many nutrients they consume affect the amount of milk they produce--in other words, production volume. Recognizing that grazing is becoming less common in Japan as a result of efforts to boost the efficiency of production, I began an experiment at a pasture in the city of Takayama. The principal point of my research was to determine whether cows could obtain enough nutrients if raised on native grasses, whose quality are inferior to purchased feed and improved pasture. To answer this question, first I created a rough vegetation map by investigating where different types of grass were growing. Then I superimposed the tracks from GPS transmitters I had fitted to the cows onto this map to ascertain what, when, and where the cows were eating. At the same time, I fitted accelerometers to the cows to measure how many times they moved their mouths while recording the vibrations produced when they did so to investigate how much they were eating. Then I asked Professor Yasunari Yokota of the Informatics Course offered by the Faculty of Engineering's Department of Electrical, Electronic and Computer Engineering to analyze the vibration sound data to detect vibrations caused by eating and by rumination. Based on this data, I estimated the amount of grass and nutrients the cows consumed. 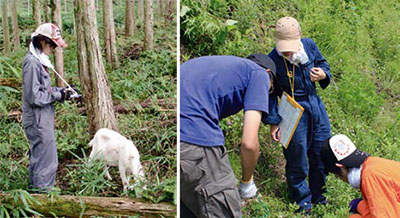 In the Heisei Memorial Park project, we relied on old-fashioned behavioral
observation, following goats and making notes about the type and volume of
grass they consumed.

However, a decision was made to close the pasture while my experiment was ongoing. At that point, the city of Minokamo and Frusic, an agricultural production corporation, approached me about conducting joint research based on their interest in land management using domestic herbivores. This research is part of the Satoyama Regeneration Project in Heisei Memorial Park, which is located in Minokamo. The project was launched in 2013 with the goal of developing the park, most of which with the exception of the village of Nihonshowa is undeveloped, as a gathering place for people. 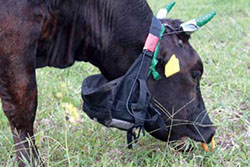 During the study of the feeding behavior of
cows on pasture in Takayama, GPS collars
and accelerometers were fitted to the
animals to assess the type and volume of
grass they consumed.

In this project, I am conducting research into techniques for regenerating and maintaining the Japan's unique satoyama landscape by grazing goats to eliminate weeds. It is necessary to control this grazing so that the goats do not eat all the plants and thereby damage the land's vegetation and so that they don't eat too little, causing the land to return to its overgrown state. To define the fine line between these two states, I have divided 1 hectare (10,000 square meters) of land into two sections and grazed two groups of goats on it, one of nine and one of seven animals. Specifically, I am trying to find out how many goats had to be released per unit of land area for how many days to eliminate the weeds. I'm working with my students to conduct a study similar to what I did with cow grazing to find out the type and volume of grass consumed by the goats, and whether they can obtain enough nutrients from the grass alone. There are no instances of an ongoing experiment focusing on goat grazing, and this research, which we can continue for five years, will provide an excellent opportunity to obtain a significant amount of data.
My goal is to develop a sustainable system that allows overgrown farmland and areas affected by disasters that are inaccessible to people to be managed using livestock.