The Center for Japanese Language and Culture, Gifu University Organization for Promotion of Glocalization (GU-GLOCAL) hosted "Gagaku* Experience Concert (Japanese Culture Workshop)" on Wednesday, December 14, 2022. The Center was able to resume this in-person workshop after many months since an outbreak of COVID-19 pandemic.

Gagaku was the first theme that the Center chose in its long history of hosting workshops. Approximately 30 students joined including participants of "Winter School 2022," international students studying the Japanese Language and Culture Studies Course at the Center, etc. Under instructions of two guest lecturers, Mr. KONDO Yasushi and Ms. KONDO Chikako, students enjoyed many unique aspects of Japanese traditional culture.

In the first half of the workshop, students listened to Gagaku music, and studied the history of Gagaku. In the form of answering brief quizzes, they learned that Gagaku came into existence from a mixture and integration of different cultures introduced in Japan. They also learned that Gagaku musical instruments became an origin for many contemporary musical instruments being played by people today.

In the second half, students were invited to touch musical instruments and put on traditional kimonos called "kariginu" and "uchigi" which were worn by people during Heian Period (794 -1185). Everyone was excited about a chance to see the musical instruments up close and wear kimonos, and spent some time taking pictures with one another. We truly appreciate the lecturers who kindly brought precious kimonos and valuable items to make the workshop full of excitements and joys for students. GU-

GLOCAL continues to offer people an opportunity to get immersed in depth and breadth of Japanese traditional culture. 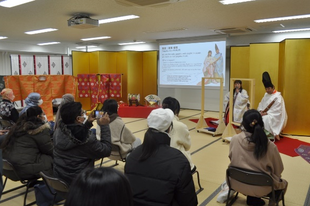 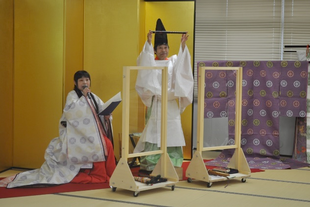 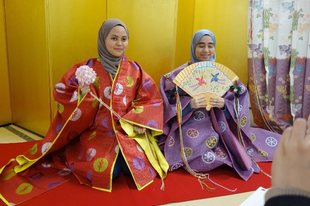 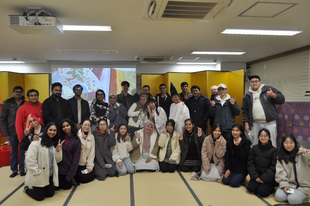