Inauguration Ceremony Events of the School of Social System Management

On Wednesday, June 30, 2021, a nameplate unveiling ceremony and a special symposium were hosted by the School of Social System Management which opened on April 1, 2021. Various activities of the school were presented to the audience in the hopes of giving them new insights into the school's education and research initiatives and commitments to contributing to society.

The nameplate unveiling ceremony was conducted in front of the General Education Building. At the outset, President Hisataka Moriwaki of Gifu University delivered his strong message for a great success of the school. It was followed by a speech by Professor Mutsuki Higo, Dean of the school who expressed his deep appreciation for everyone whose long-term dedications resulted in a successful opening in April. He also stated that he would like to continue to make a step forward together with students, academic and administrative staff. On behalf of the 1st year students, Mr. Issa Ogura conveyed his determinations to pursue his academic goals and achievements through his strenuous engagement in studies at the school.

After their speeches, the attendees observed the school's nameplate being unveiled. President Moriwaki, students and staff all joined the photo session afterwards.

At the University Auditorium, a special symposium began whose title was "Pursuit and Exploration: Gifu University's Challenge to Create an Optimal Environment for Studying through Close Collaboration among Faculties, Universities and Societies." The symposium was also livestreamed for public audiences.

After an opening speech and the school overview given by Professor Higo, the first session began with a keynote speech delivered by Tokushi Nakashima, President/Founder of Global Mobility Service Inc. under the title, "Who is a true entrepreneur who can change the community? My 30-year experience as an entrepreneur."

In the second session, with Professor Akiyoshi Takagi from the school as a moderator, the following four guests participated in a discussion as panelists:

They exchanged their views on the theme, "Build a new society by forming a cycle of diverse learning." In a question and answer session, many students sought comments from the panelists which helped other audience expand their understanding about the themes of symposium.

A total of 145 people attended in the symposium from on- and off-campus. We are pledging to reflect what we have learned from the symposium on our educational, research activities and social contributions in the years to come. 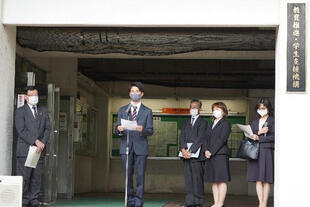 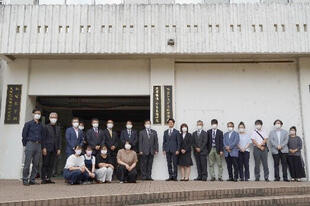 Commemorative photo before the nameplate 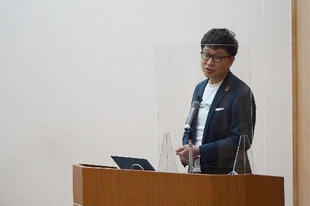 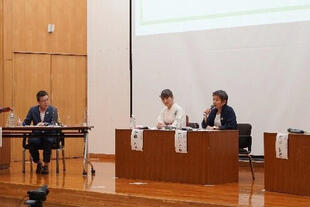