Since 1955, the Nishina Memorial Prize has been awarded to up to three outstanding physicists for their achievements in the field of atomic and sub-atomic physics annually by the Nishina Memorial Foundation. The Foundation was established to commemorate Yoshio Nishina, who was the founding father of modern physics research in Japan. On Monday, November 9, 2020, the 2020 (the 66th) Nishina Memorial Prize was awarded to Senior Professor Kazuma Nakazawa for his research, "Study of double strangeness nuclei using nuclear emulsion plate."

Professor Nakazawa has proposed and promoted a series of experiments using nuclear emulsion plates at the KEK 12 GeV proton synchrotron as the predecessor of J-PARC and the J-PARC Hadron Experimental Facility. This award was given in recognition of his systematic research on double-strangeness nuclei.

In his meeting with the President, Professor Nakazawa gave the details of his research work and stated, "It is a great honor for me to be awarded the "2020 (66th) Nishina Memorial Prize." I will continue my research in hopes that my awarding will give impetus to the next generation.

Professor Satoshi Beppu, Dean of the Faculty of Education also gave the following word of encouragement: "We are very proud of Professor Nakazawa's success. We would like to convey the excitements of studying to our students, and develop human resources to follow your footsteps." 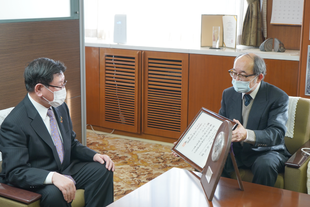 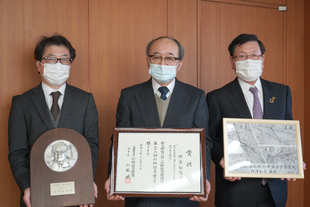