With the cooperation of Gifu Kita Police Station, Gifu University hosted the Traffic Safety and Crime Prevention Seminar at the Multipurpose Hall of the General Education Building, Gifu University on June 6, 2018. The target audience was the teaching and administrative staff of the university. Its major objectives were to increase awareness of the university staff about the traffic rules that they have to observe, and to prevent traffic accidents in the future.

Prior to the opening of the seminar, Mr. Seiki Ohfuji, Executive Director for General Affairs & Finance, Vice President gave a speech. "Every teaching and administrative staff who are responsible for guiding students must be fully aware of the importance of traffic safety," said Mr. Ohfuji. The audience was later shown the video clips about the traffic accidents actually happened after dusk and at night. By watching these clips, the participants came to realize the different perspectives of a driver and a pedestrian. They were also given instructions about how to drive safely at a moderate speed, and always be alert against any unpredictable situations.

Mr. Kazuhisa Hayashi of Gifu Kita Police Station later spoke about how to be safe and protect themselves, how to avoid serious or deliberate accidents/incidents, as well as advices for international residents driving in Japan with international drivers' licenses.

Many participants took a note and listened to the lectures very carefully. 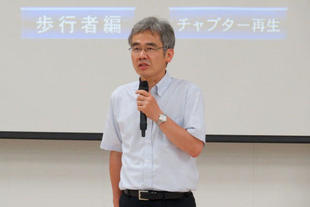 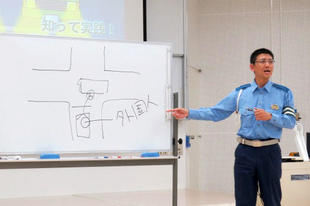