"Initiative for the Implementation of the Diversity Research Environment" Kickoff Symposium

The Gender Equality Promotion Office held a kickoff symposium titled "Aiming for the Revitalization of Gifu with Active Promotion of Female Researchers - Support Program for the Cultivation of Community-based Female Researchers -" on November 9, 2015. The Support Program is part of Gifu University's "Initiative for the Implementation of the Diversity Research Environment (Collaboration Type)," sponsored by Japan's Ministry of Education, Culture, Sports, Science and Technology (MEXT).

First, President Hisataka Moriwaki gave an opening speech, and this was followed by Dr. Yasuko Yamamura, Program Officer of the Department for Promoting Science and Technology System Reform of the Japan Science and Technology Agency, who delivered the keynote lecture titled "The Importance of Developing and Supporting Female Researchers in Japan." Dr. Yamamura spoke about programs for developing and supporting female researchers by introducing the actual efforts and results of other universities in Japan. The participants intently listened to the lecture.

Third, a panel discussion was held under the theme of "Aiming for Local Revitalization through the Promotion of Female Researchers," and Professor Masako Hayashi, Vice President for the Promotion of Gender Equality and Diversity, served as the moderator. In the panel discussion, Mr. Satoshi Ichikawa of Daily Newspaper Gifu Shimbun, Ms. Kyoko Kawano of Gifu Prefectural Government, Mr. Takahiko Nonogaki of API Co., Ltd., and Dr. Kyoko Yamane, Assistant Professor of the Faculty of Applied Biological Sciences exchanged opinions as the panelists from their perspectives on the importance of promoting female researchers working in Gifu Prefecture to higher positions, and providing support that would enable them to continue their research while raising children. 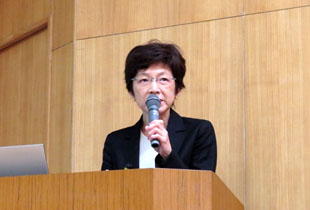 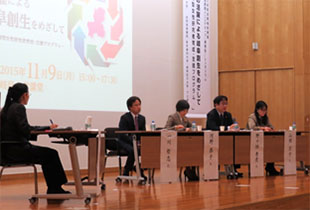 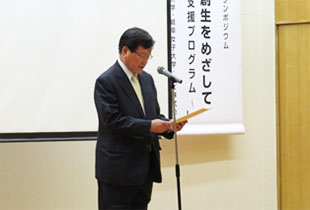