Before the certification renewal screening, the management system was re-examined based on an internal environmental audit, which was attended by eleven students (nine members from the greening activity group "Three Trees," and two students who studied at last year's general education program, "Environmental Management and Operation"), and the management review by President Hisataka Moriwaki in October 2015.

On the day of screening, three external auditors visited the University. They conducted an interview with the President, and then carried out the audit for each faculty and school. After the screening process, the ISO 14001 certification renewal was approved and the new certificate was issued to the University in December, 2015.

The external auditors gave high marks to the faculty education programs which enhance the environmental consciousness of students, as well as for the environmental activities which the University jointly engaged in with local companies. They also pointed out some of the challenges to be addressed for the further improvement of the environmental management system.

Gifu University will promote campus-wide collaboration to overcome these challenges and make continued improvements, and plans to undergo a follow-up screening as well as a transition screening associated with the 2015 revisions of the ISO 14001 standard.

Scene of the screening 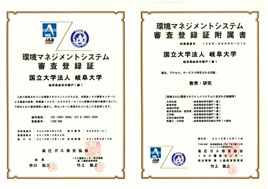