On December 9, 2015, the International Student Center held a workshop on how to wear Juni-Hitoe (twelve layered kimono) traditional dress. The workshop was co-hosted by Gifu University Head Office for Glocalization (GHOGL) in Yanagido Hall (Japanese-style room).

This workshop was attended by around 50 people, including international students from the Center's Japanese Language & Culture Studies Course and other faculty, Japanese students, and teaching and administrative members. Students of the Indian Institute of Technology Guwahati (IITG) also attended the event. They were visiting Gifu University for the Winter School Program, which began this year.
This is the second workshop after the successful first one last year. Based on the Center's concept "Experience the Real," this workshop is considered as an experience-based class for Japanese culture for the University students. Five instructors, including Ms. Keiko Ito and Ms. Chisato Sato, who specialize in teaching kimono-wearing, were invited to the workshop. They gave lectures about wearing kimono and associated customs. All of the instructors wore montsuki hakama, formal kimono with a traditional Japanese family crest and a divided skirt. Their dress, together with the traditional court music of gagaku, enhanced the solemn mood in the room.
First, Associate Professor Momoko Tsuchiya of the International Student Center introduced the instructors and talked about the history of Juni-Hitoe as well as basic facts about kimono. Second, Ms. Seo Eunae, a Korean student at the Japanese Language & Culture Studies Course, who was selected as a model, walked into the room. She was wearing kosode (short-sleeved kimono), 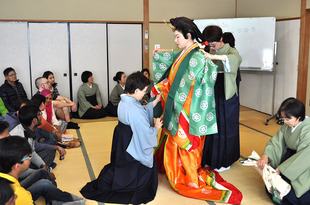 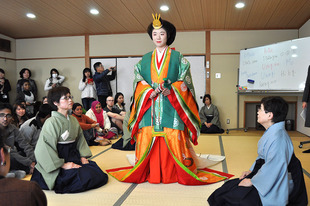 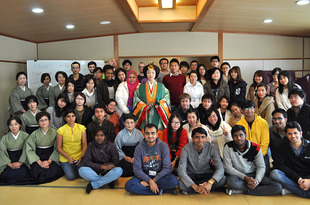 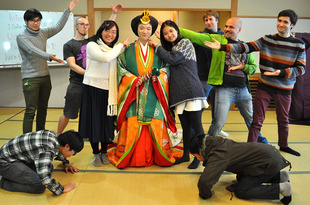 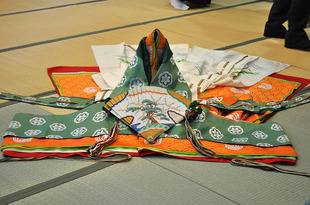 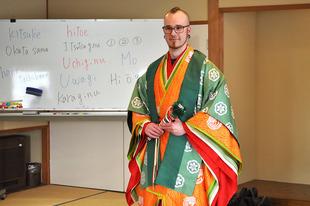 Male student putting on the utsusemi