The 14th Japanese Speech Competition by International Students Residing in Gifu Prefecture was held at Kakamigahara Campus of Chubu Gakuin University & College on November 28, 2015. Three international students of Gifu University took part in the Competition. They are Ms. Wang Huiyi and Ms. Li Qi Qi both of whom are studying at the Japanese Language & Culture Studies Course of the International Student Center, and Ms. Nguyen Ngoc Thanh Tam, a second-year student of the Graduate School of Applied Biological Sciences.

Since 2001, the Competition is organized by the Gifu Regional Council for the Promotion of International Exchange and is funded by the Gifu International Center. Its main objectives are to raise interests in Japanese and enhance Japanese skills of international students. Gifu University is serving as an administrative office of the Council.
President Yoshinori Furuta of Chubu Gakuin University & College, who is a Chair of the Competition Organizing Committee delivered an opening speech. A total of nine contestants who are studying at universities, colleges and Japanese language institutions within Gifu Prefecture gave their speeches in Japanese under a common theme, "My future dream - after my studying abroad-." The contestants were given seven minutes each for their speech and tried their best to demonstrate the fruit of their day-to-day study of Japanese. After a rigorous screening, Ms. Wang Huiyi who made a speech titled, "Aim to become a Japanese teacher for the time being" and Ms. Nguyen Ngoc Thanh Tam who spoke about her research work of termites were given an Award of Excellence.
Every winner was presented with an Award Certificate and a small gift from President Hisataka Moriwaki of Gifu University, and a Chair of the Council. 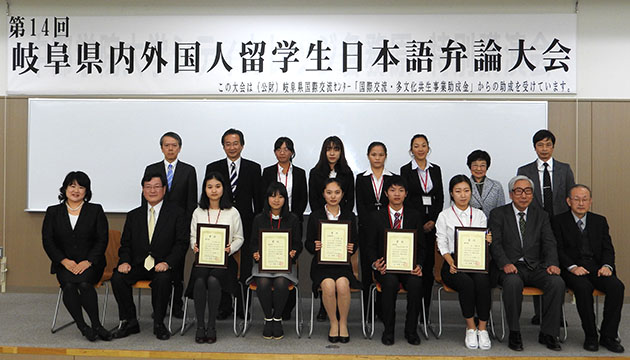