In this lecture, a wide variety of chickens, their unique biology, the way to conserve the species, and environmental factors that enable them to lay good quality eggs were introduced. The problems hiding between traditional culture and environmental conservation were also touched upon, taking falconry as an example. This lecture was held to introduce the research work of UGSAS and make it public extensively.

First, Dr. Masateru Senge, Dean of UGSAS, offered the opening address. Then, Dr. Osamu Doi, Professor of the Faculty of Applied Biological Sciences introduced three researchers who later gave lectures. The names of researchers and their lecture titles were as follows:

The lecture was participated in by 46 people (28 citizens, 6 students and 12 faculty members) who intently listened during the session. Question and Answer sessions followed each presentation, and many questions were asked by the participants concerning "cross-fertilization for species conservation," "what jidori(locally-raised chicken) means," "the best time for laying an egg and artificial raising," "the close relationship between chicken feathers and eggs," "the molting process," and "problems that lie in traditional ukai(cormorant fishing) and falconry culture." According to the responses to questionnaires that were collected after the session, many participants showed a strong interest in the environment, indicating their intention to attend the same kind of environmental lecture next year. 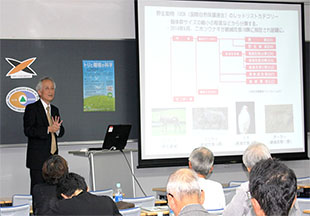 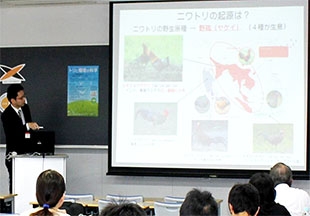 Participants listening to the lecture of Assistant Professor
Tadano 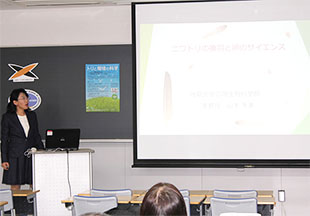 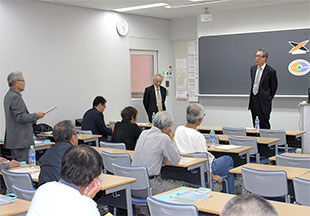 Professor Emeritus Mori responding to the question of a
participant