In 2015, Gifu University was successfully selected for "Step Up in Gifu & Positive Effect on Gifu - Collaboration for Cultivation of Community-Based Business Leaders," under "COC+ Program (a Center of Community Program for local revitalization)" sponsored by the Ministry of Education, Culture, Sports, Science and Technology (MEXT). For the implementation of this project, Gifu University concluded an agreement with Chubu Gakuin University & College, Chubu University, Nihon Fukushi University and Gifu Prefecture on October 16, 2015. Under this agreement, the institutions will work together for local revitalization by capitalizing on their strength as the "Center of Community," making efforts to develop human resources for future leaders in Gifu, and serving as the backbone for the invigoration of local businesses.

At the signing ceremony, President Hisataka Moriwaki expressed his determination, stating "Gifu University will play a central role to gather the full force of industry-government-academia-finance alliances to make people settle in the region." Next, Mr. Masatoshi Yasufuku, Director of the Department of Environmental Affairs and Citizen Support of Gifu Prefecture emphasized, "Developing the full strength of each university, we will work closely with other collaborative institutions for the local revitalization." This was followed by speeches on the motivation for this project from the presidents of the other universities. 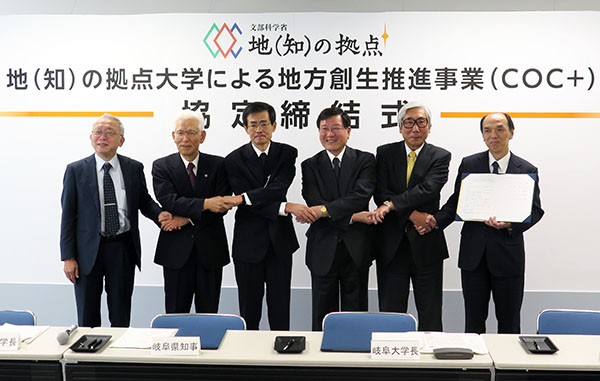