Gifu University held the 43rd Gifu University Forum at the University Auditorium on Monday, December 8. A few times a year, the University holds lectures by top researchers who have made great contributions to the development of each academic field. In this 43rd forum coordinated by Gifu University Gender Equality Promotion Office, Ms. Yumiko Ehara, Executive Board Member & Vice President of Tokyo Metropolitan University, delivered a lecture titled "Diversity Promotion in the Age of Globalization - based on Gender Equality" and a total of 85 people including students, faculty and staff members attended. The forum started with an opening address by Gifu University President Moriwaki, and then Ms. Ehara gave a lecture. In her lecture, Ms. Ehara mentioned that diversity promotion at universities is now required as a consequence of the internationalization of world universities caused by globalization. She also spoke about the connection between gender equality and diversity promotion, and the meaning that gender equality is included in the measures for the University's diversity promotion. Throughout the forum, attendees listened attentively to her lecture. Gifu University will continue to make efforts to implement action plans under the basic policy of promotion of human resource development and diversity. 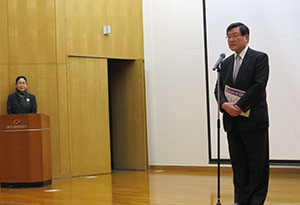 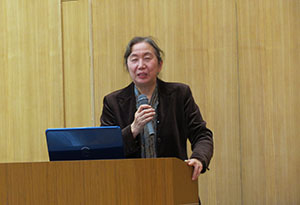