Homecoming Day, which is part of the anniversary events, was held with the aim to bring Gifu University alumni, current students, faculty and administrative staff all together to trace the history of these past 10 years and deepen interchange. Roughly 70 people attended the event.
After the welcome address by Dr. Seishima who is the Dean of the School of Medicine, Mr. Takanobu Matsunaga, former Dean of the School of Medicine, said in his speech that he was overwhelmed by a flood of various emotions when a long-cherished wish, that is relocation, was realized.
Following the speech, current and previous Directors of the University Hospital (current Director Ogura, former Director Iwama, former Director and current University President Moriwaki) had a round table discussion about the progress after the relocation of the University Hospital, hardships in the Hospital management they went through and the future outlook of the Hospital. Former Director Kitajima who could not be there sent a video message to the event attendees. It became a great opportunity to introduce the activities of the University Hospital.
At the tea party-style session titled "Let's talk with the University alumni," Dr. Murakami, Director of the Center for Regional Medicine, gave an explanation about the approaches to regional medicine and the rich curriculum for medical education both before and after graduation. Later in the event, the first students admitted for medically underserved areas who graduated this year spoke about their clinical training, gave advice to current Gifu University students and exchanged opinions. In the speech made by Mr. Yoshinori Kubota, Deputy Director-General of the Department of Health and Welfare (Gifu Prefecture), he showed the expectation for the first students admitted for medically underserved areas.
At the end of the Homecoming Day, Mr. Aoki, President of the Alumni Association of the School of Medicine, expressed the intention to support more research activities at Gifu University in his speech.
Positive feedback was given from the attendees after the event such as "I was impressed with the faculty's effort to nurture medical professionals with broad perspective. I feel proud of being a graduate of the Gifu University School of Medicine." 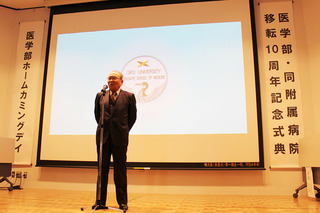 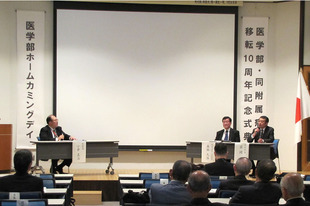 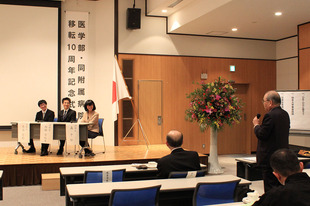 The session titled "Let's talk with the University alumni"

Following the Homecoming Day, the 10th Anniversary Ceremony was held. The attendees of the Council for Related Hospitals of Gifu University also joined and roughly 100 people attended the ceremony.
In his address, Dr. Seishima expressed his appreciation to people who engaged in the relocation and pleasure it marked 10 years since they relocated. He also anticipates that this ceremony will be a point to take a leap into the bright future, 20 or even 50 years from now.
Gifu University President Hisataka Moriwaki made a speech and expressed expectations for the School of Medicine and the University Hospital after speaking about the history of the School and the Hospital, the current status and future prospect of Gifu University.
Next, Mr. Yasuhiko Kawade, Deputy Chairman of Gifu Pref. Medical Association, Mr. Hiroyuki Mabuchi, Chairman of Gifu City Medical Association, and Mr. Yoshihiro Ishihara, Director-General of the Department of Health and Welfare (Gifu Prefecture), made congratulatory speeches.
A commemorative speech titled "Cross-Validation in Medicine" was also made by Prof. Masashi Fukayama of the Department of Pathology, Graduate School of Medicine, the University of Tokyo, who also serves as the Chairman of the Japanese Society of Pathology. During the lecture, Prof. Fukayama described the example of pathological autopsies and said that in addition to the enhancement of cross-validation function in medicine, winning public trust and understanding of efforts by the medical-services community is important. Attendees listened attentively to the speech.
At the end of the ceremony, University Hospital Director Ogura said in his speech that the University Hospital, as a special function hospital, will continue to work toward nurturing medical doctors who understand patients well. 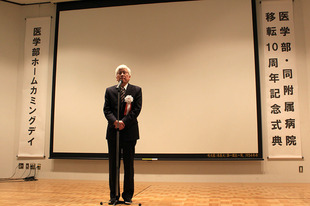 Dr. Seishima, Dean of the School Medicine, gives an address 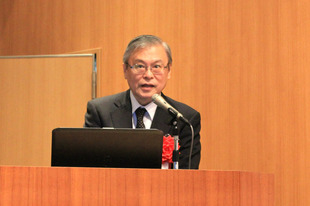 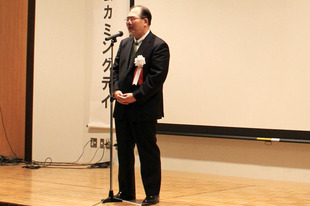