International Week in the Fall 2014

The Office for Academic Globalization held the following events during the "International Week in the Fall 2014" from November 4th to 17th, 2014 in order to raise awareness of international affairs among the students, the faculty and the administrative staff of Gifu University.

As a part of the International Week in the Fall 2014, the Poster Session was held at the Entrance Hall of the University Library from November 4th to 17th, 2014.
The purposes of this Session are to provide the latest information of overseas sister universities and to introduce home countries of international students currently studying at Gifu University.
Posters and booklets of the sister universities, Gifu University students' experiences of studying abroad as well as summer school programs sponsored by Gifu University were posted on the multiple boards in the hope that they would help the students get familiarized with studying overseas.
International students from four countries, Russia, Sri Lanka, Laos and Guatemala volunteered to prepare for the photos of beautiful landscapes, comments on local lives and delicacies of their countries, which attracted a lot of attentions of the visitors. 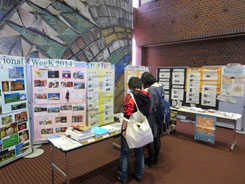 Posters and booklets are on display 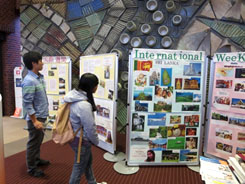 Visitors are watching the boards 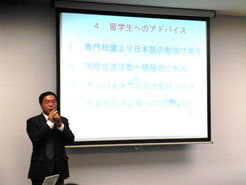 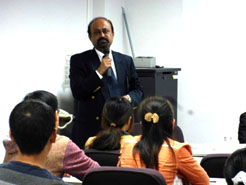 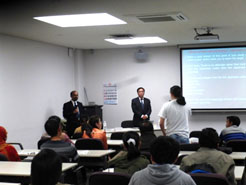 3.Meeting between International Students, Researchers and Board Members hosted by the President (November 5th, 2014)

The Meeting between International Students, Researchers and Board Members was held with Hisataka Moriwaki, President of Gifu University as a host in an aim to form close connections among President, board members, deans, directors, international students and researchers of Gifu University. All of the participants including their families enjoyed this informal get-together held at the Dining Hall No.2 within the university campus. The photo shown below was taken in front of the hall just prior to the opening of the meeting.
Dr. Toyohide Takeuchi, Associate Director of the Office for Academic Globalization kindly served as master of ceremonies of this meeting. After the President's opening remarks, Dr. Takeuchi introduced the board members and the two international alumni of Gifu University to the participants. Dr. Yu Ping and Dr. Nasir Uddin, both of whom have already built successful careers after graduating from Gifu University, gave lectures to the international students currently studying at Gifu University the previous day.
After a series of addresses and introductions, Dr. Fumiaki Suzuki, Director of the Office for Academic Globalization proposed a toast for the meeting. Approximately 130 people attended the meeting and all of them fully enjoyed lively talks and taking pictures with the board members, etc. With a great turnout, the meeting was a huge success. 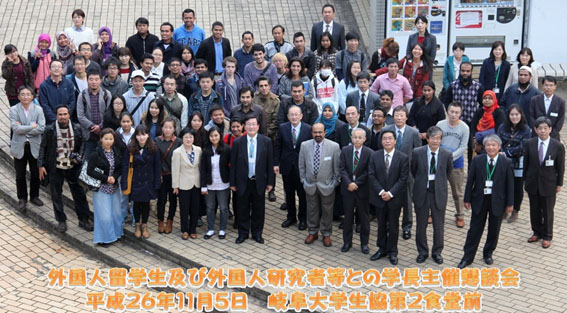 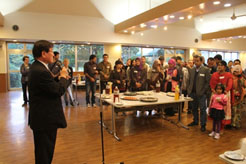 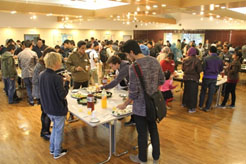 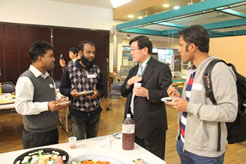 Talking with the President (second from left) 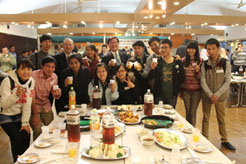 Photo Session with the President (center in the back row)

As a special version of English Lounge being held twice a month, the Special Lounge was held during the International Week in the Fall of 2014 after a successful first Special Lounge also held during the International Week in the Fall of 2013. In addition to the three languages, Japanese, French and Korean selected last year, Chinese was added this year. Around 40 participants were divided into four groups, given a chance to study basic French, Korean, Chinese or Japanese in free conversation style.
Although the time was limited (40 minutes), participants made many positive comments on the lounge such as "It was very enjoyable", "This is the first time for me to study French, but I enjoyed it very much", "Very effective way to share views and cultural exchange between international and Japanese students," and "The lounge is really helpful for me to study Japanese and to talk with Japanese people. " After the session, all the participants said they would like to take part in the next lounge and some of them proposed other new languages for the future lounge.
Many of the participants stayed longer to enjoy free conversations and took group photos with the international students who served as teaching staff for the lounge. 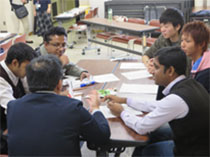 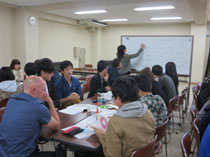 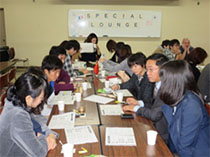 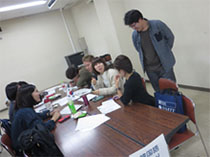 The Network Meeting with the Local Companies between Gifu University international students and the local companies was held at the Dining Hall 2 within the university campus on November 12th, 2014. In order to provide international students with opportunities to know local companies, the meeting was held with support of Gifu Shinkin Bank Ltd. Presidents, board members and recruiting personnel from 15 local companies made short presentations about their business operations at home and abroad. At the reception held after the presentations, about 70 international and Japanese students had a chance to browse through the company booths. They intently listened to the explanations given directly from the company officials in the hope that they could build a business career of their choice in the future. 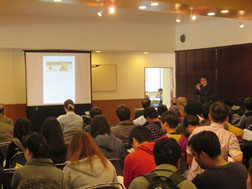 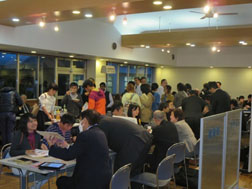 Participants talk with the company officials