Nohgaku Workshop for International and Japanese Students is held

On July 13, 2016, the International Student Center opened Nohgaku (Noh and Kyogen Japanese traditional performing art) Workshop for international and Japanese students at Yanagido-kaikan Hall in conjunction with the Gifu University Head Office for Glocalization (GHOGL). Around 80 people joined including the summer school students, international and Japanese students, teaching and administrative staff as well as local residents. Mr. Madoka Mikaka and Mr. Hiromichi Tamoi who perform Noh dramas as main actors called "Shite" in Kanze School*1, and Mr. Kodo Yamaguchi and Mr. Yoshinobu Shigeyama, both of whom are Kyogen drama performers in Okura School*2, were invited to the Workshop as instructors.

First, the instructors played one of the representative Noh drama called "Shakkyo" before the audience. After the performance, they made self-introduction and talked about the history and performances of Noh and Kyogen, as well as big differences between serious Noh plays and comic Kyogen plays.
When the instructors showed four masks for Noh and Kyogen, the audience was surprised by big differences in facial expressions of those masks depending on which angles people look at. Many unique aspects of a Kyogen mask also evoked laughter among the audience.
The participating students practiced how to cry in Noh and how to bursts out laughing in Kyogen. In chanting "Takasago" story, the participants gave a laughter so loudly that even instructors were impressed by their performance.

In "Neongyoku" in Kyogen, people's chuckles gradually grew into a huge laughter and reverberated throughout the entire Hall. All participants were given a rare opportunity to experience the Japanese traditional culture throughout the body.

At the end of the workshop, the instructors helped a summer school student put on traditional Noh kimono. There were two different types of kimono. One was a formal, gorgeous kimono for Noh plays. The student appeared on stage wearing the kimono and a special wig. The other kimono represented a menacing demon.

This Nohgaku Workshop of Gifu University offers an invaluable opportunity for people to watch one of the time-honored Japanese cultural activities under the instructions of professional performers. To our surprise, there was more participation by the local residents than we expected for the Workshop on July 13.

The International Student Center and GHOGL continue to hold a number of programs for Japanese culture and traditions, and will disseminate their attractions both on and off campus in the days to come.

*1: There are five "Shite" schools in Noh: Kanze, Hosho, Kanparu, Kongo and Kita.
*2: There are two schools in Kyogen: Okura and Izumi. 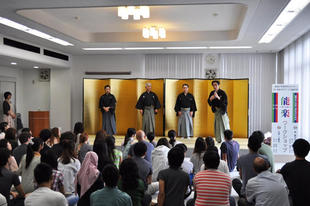 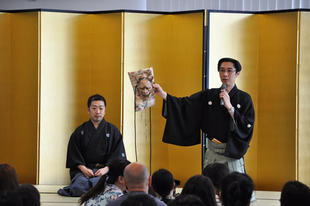 Explanation about a Noh mask 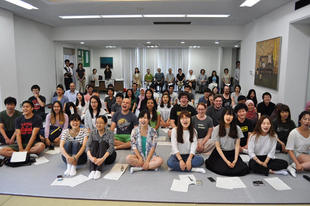 Practice a "loud laughter" together 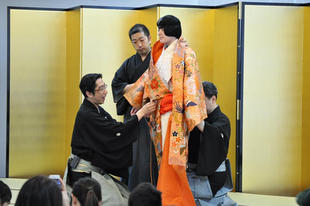 Dressing up in Noh kimono